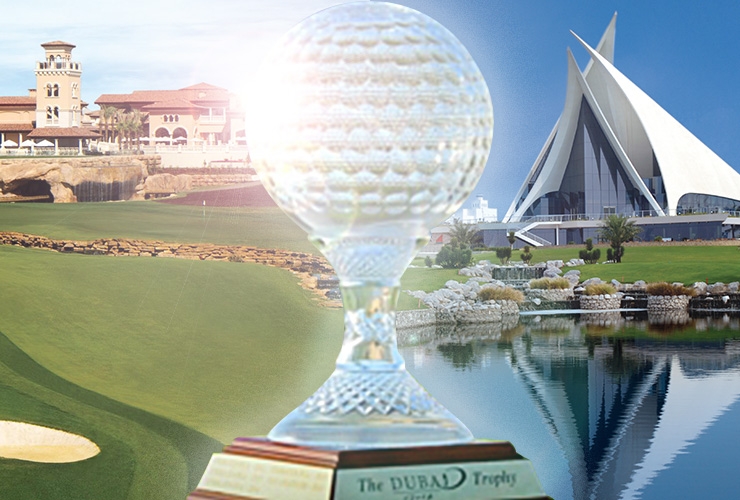 By Kent Gray
With the MENA Tour’s ‘Three Amigos’ back for the Emirates Golf Federation (EGF) Amateurs after missing last year, it’s little wonder UAE PGA captain Luke Plumb has snatched underdog status for next weekend’s Dubai Trophy. That and the fact the Pros haven’t won the annual Ryder Cup-style matches since 2015.

After being on European duty last summer, COVID-confined Josh Hill, Toby Bishop and Arjun Gupta are back to bolster Steven Kelbrick’s EGF line-up who are seeking a fifth straight win in the 54-hole event set for Jumeirah Golf Estates and Dubai Creek Golf & Yacht Club on Oct. 3-4.

Hill, fresh from a run to the round of 16 at The 125th Amateur Championship at Royal Birkdale, and Gupta are two of Kelbrick’s four picks, joining Sharjah’s William Xu and Emirati international Khalid Yousuf. Bishop qualified through the truncated EGF Order of Merit season which was won by Dan Byrne. The Els Club Dubai youngster adds yet more firepower to the amateur side which was revealed on Thursday to Golf Digest Middle East, along with Plumb’s 16-strong team. 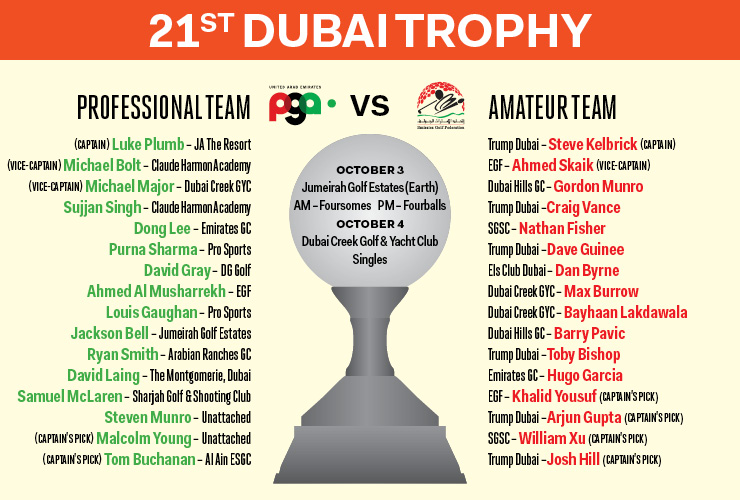 JA The Resort-attached Plumb is confident he has the team to halt a run of four straight losses but also concedes Kelbrick’s team deserve to go in favourites.

“The Amateurs have a really strong side. Golf in the region has some fantastic talent,” Plumb said. “The big three are all playing, Josh, Toby and Arjun, and they are mixed in with lots of experience so they are formidable opposition. I think we are underdogs but certainly have a great chance and there is no pressure on us.”

It’s not that the Pros are lacking talent or form. Plumb just wrapped up the UAE PGA Order of Merit title, Michael Major (Dubai Creek) edged Dong Lee (Emirates G.C.) 3&2 to capture the Henrik Stenson Eyewear UAE PGA Matchplay Championship while UAE national Ahmed Al Musharrekh (EGF) carded rounds of 75-69 at The Creek for a +1 aggregate to become the first Emirati to capture the UAE PGA Championship earlier this week.

Congratulations to @major_michael for winning the 2020 @henrikstensoneyewear UAE PGA Matchplay Championship 👏🏼🏆😎 Mike fired some timely back nine birdies to edge out runner up @dongkyonlee by 3&2. @gaughanlouis pipped @davidlaingpga to finish in overall 3rd Place. A big thank you to our sponsor Henrik Stenson Eyewear & @trumpgolfdubai for the hospitality today. #uaepga #henrikstensoneyewear #matchplay

Congratulations to Ahmed Al Musharrekh on winning the UAE PGA Championship. Ahmed fired a -2, 69 round a testing Dubai Creek for a total of 75/69 +1. This is the largest golf competition for a UAE National to ever win and a fantastic achievement for Ahmed 👏🏼⛳️🏆 Runner up by only a single shot was @jacksonbell01 JGE with 68/77 +2 and in solo third @graydavid_1 with 72/74 +3. X3 tied 4th on +4 @malc_younggolf @phil_waine @urs_perfectman. A fantastic 2 days @jumeirah.golf @dubaicreekgolf and thanks to all their teams for the hospitality. #dubaigolf #dubaicreek #jumeirahgolfestates #uaepga #uae #winner #champion

“I think the team is extremely strong this year, maybe one of the best I’ve played in with no weak links and lots of people playing well so we go in with a good chance,” Plumb said. “We will be creative with the pairings to try and give us the best chance. I think it’ll just come down to who plays well on the two days. If we play to the level we can, then we have a great chance this year.”

Kelbrick is equally confident, insisting he hadn’t looked at the UAE PGA team.

“We can only control ourselves,” the Trump Dubai member said before recalling his dream performance at the 2019 Senior Open at Royal Lytham and St. Annes.

“It’s the same as Senior Open. We are here now, let’s embrace it and believe that we can win. Five in a row is possible but the key is attitude. We’ve got to enjoy the experience and allow it to lift our performance. That’s the goal.”