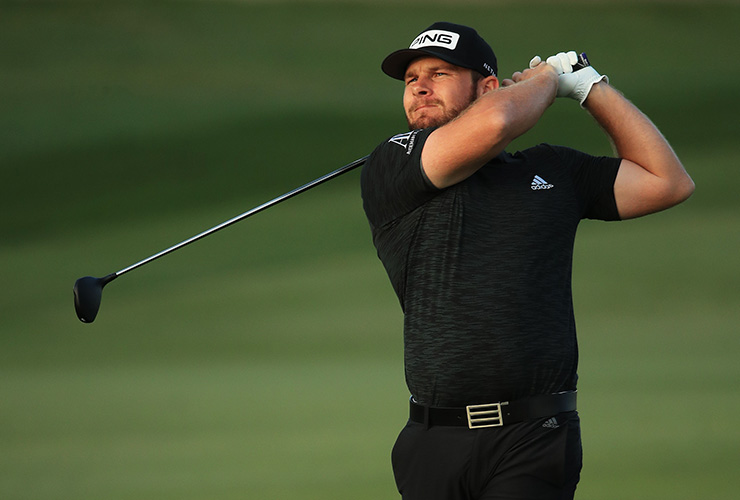 By Kent Gray
When the alarm clock wakes Tyrrell Hatton early on Saturday so he can put the finishing touches on his thus far brilliant second round at the 16th Abu Dhabi HSBC Championship, the anticipation will almost be palpable. For the rest of us, that is, and not for the reason you might think.

Sure, it will be fascinating to see if the Englishman can maintain or even add to the already impressive four-stroke lead he’s established through 31 holes of in the European Tour’s season-opener. But it’s not what he does next when the mainstream media cameras resume rolling, rather it’s his comedic value as the lead actor in the European Tour’s latest online ditty, #AngryGolfers, that has the golf world on tenterhooks.

RELATED: After an overnight reset, Tommy Fleetwood has given himself a shot at a third Falcon in five years

The parody will feature on a small screen near you sometime soon and if the preview that dropped while Hatton was on course late Friday at Abu Dhabi Golf Club is any indication, it’s going to be another classic from the tour’s award-winning social media team.

“Hi, I’m Tyrrell, and I’m an angry golfer,” the world No.9 says, pokerfaced, to a room of his peers in an alcoholic’s anonymous-styled setting.

Later, in real life talking to on course reporter Tim Barter, Hatton added the anticipation when asked about the impending viral video. “I’m not quite sure why they chose me…” he said drolly.

We’ll have to wait and see what happens next, both online and out on the national layout where Hatton backed up his opening 65 with more stunning shot making Friday. There was a pretty eagle on the par-5 2nd, his third in 20 holes, and four other birdies as Hatton got it to 12-under before a lack of light suspended play at 5.57pm. Overnight leader Rory McIlroy was one of four players in a share of second place on seven-under after a mostly turvy, topsy-turvy afternoon trying to back up his opening 64.

To be fair, Hatton is not as volcanic as he once was when shots go awry. Maybe that’s because he’s hitting less howlers nowadays, as evidenced thus far this week even if he looks bemused half the time. The truly scary bit for McIlroy and co. is that Hatton is something of a Rolex Series specialist with three wins in the elevated events including last year’s BMW PGA Championship at Wentworth.  He’s finished 1st, T46, 1st and T8 in his last four Rolex starts and it won’t surprise if he goes on to secure a fourth gold star this week to add to a growing global presence after he also captured the PGA Tour’s Arnold Palmer Invitational last season.

He led by as many as five late in the still to be completed second round, highlighted by the eagle, courtesy of a sublime approach and a 22 foot putt, and four successive birdies from the 7th, the best of them via a long bunker shot on the 8th.

“I’m obviously in a great position at the moment,” Hatton said afterwards.

“It was certainly tough out there, so I’m really happy to be 5-under. Holed some nice putts and there was a couple par putts toward the end of my round, nice to hole them and keep a bit of momentum going.”

Hatton’s putter has been the difference so far, impressive even when they didn’t go in.

“I haven’t actually done much short game [work]. It’s been weird. Like the last sort of three weeks I’ve been hitting balls again, I was mainly focusing on long game. It’s a little bit of a surprise to see my short game as good as it has been last two days but obviously I need that to continue over the next however many holes we’ve got left.

“It’s going to be a bit of a long wait potentially if I finish nicely tomorrow morning before I go out for round three. But it will be fine. I’ll just try and stay loose and see how we go.”

It was a tough day for McIlroy but didn’t start that way. He birdied the 1st with a slightly fortuitous wedge shot tucked tight over advertising hoardings, should really have birdied the second after a mammoth drive and did gain another on the third with a near tap-in. But the world No.4’s driver suddenly started getting him in trouble. After a sloppy bogey on the 4th when he dumped his tee shot on the par-3 into a bunker, there was an even dustier double bogey on the fifth courtesy of a hooked tee shot into the tree-dotted waste area where he did well to escape out sideways.

McIlroy’s tee shot on the 9th was lucky not to end up wet and resulted in another sideways chip out. He then produced a brilliant shot from 157 yards to save par only to drop another shot on the 10th courtesy of a pushed drive and a pushed wedge into a greenside bunker There was further bunker trouble on the 13th when the Northern Irishman short-sided himself and failed to make the sand save.

McIlroy, a four-time bridesmaid at Abu Dhabi G.C., will resume Saturday on the par-3 15th at two-over for the round but still in it at seven-under for the championship alongside Aussie Jason Scrivener, Thailand’s former MENA Tour winner Jazz Janewattananond and French COVID survivor Romain Langasque.

Two-time champion Fleetwood lurks ominously at six-under after rattling off nine birdies in his last 25 holes.

The cut looks likely to fall at -1 with 65 players inside the bubble when play was called for the day, the knock-on effect of a fog delay on the opening morning. Justin Thomas was one of those riding the -1 tightrope after a battling display.

Three-time champion Martin Kaymer is among those guaranteed to have the weekend off at three-over, as will Abu Dhabi amateur champion Arjun Gupta and Emirati No.1 Ahmad Skaik who were both +13, Gupta finished in the clubhouse and Skaik through 12 holes of his second round.