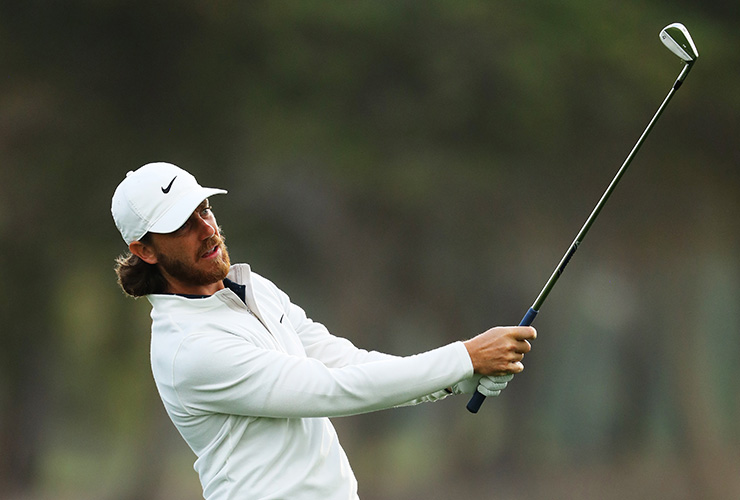 Warren Little/Getty Images
Fleetwood plays his second shot on the 16th hole during the second round on Friday.

By Kent Gray
Sometimes you just have to walk away.

That’s exactly what Tommy Fleetwood did when the hooter sounded on Thursday evening as the onset of dusk suspended the first round after morning fog had earlier delayed the start of the European Tour season opener. The two-time champion had the option of attempting the five-footer he had left for par on the 11th but the opening round of the 16th Abu Dhabi HSBC Championship had been such a grind in the late afternoon wind he decided to cut his losses and come back in the morning.

“The hooter went and I kinda looked at it, and I looked at Finno [caddie Ian Finnis] and I just thought, we’ll cut our losses today, save it and come back tomorrow. That was probably the best thing we did [all day Thursday] really. I’ll be honest, that probably wasn’t going to go in last night either,” said the world No. 19.

The decision to sleep on it proved an inspired decision. Fleetwood, 3 over at the time and in danger of being on the wrong side of the cut line early, duly holed the putt when the first round resumed early Friday and then went on to hit it “stiff” on the par -3 12th. The resulting birdie was followed by three more gains in his final four holes as the Englishman, suddenly his old self, turned a potentially week ending score into a thoroughly acceptable one-under 71.

The switch flicked, Fleetwood cashed in by carding a five-under 67 in his second round Friday to move to six under for the championship and right in the mix for the weekend. After playing his first 11 holes in three over, he’s negotiated the next 25 in nine under and, just as importantly, bogey-free.

“Today I did things a lot better. Did what we discussed in my golf swing and drove it really, really well this afternoon and that makes a difference in the wind. Hit some great irons, holed out really well, didn’t really give anything away so it was a much better day.”

The comeback is doubly impressive when you consider Fleetwood, a back-to-back champion on the National layout in 2017-18, has six new clubs in his bag as well as a new ball in play for the first time.

“So I’ve been with them a while, flipping and changing stuff, so it’s been really nice to have a team behind me with the clubs and everything, working with me and yet, no matter how much testing you do, you’ve still gotta go and take it out on the golf course.

“We kind of got thrown in the deep in yesterday and today with the [windy] conditions but I think today has given me a lot of confidence. The new ball is great, like I say drove it brilliant today, and I hit my irons really, really well. So work is going well, equipment is going well but you always need that proof and I don’t think you’ll get many tougher days to test it on, so all good.”