A defiant Bryson DeChambeau lashes out at social media critics: ‘It’s an attack’ 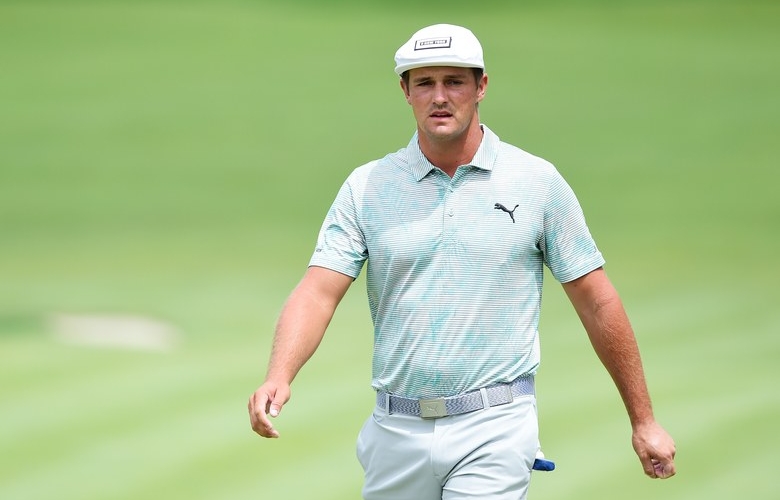 DeChambeau walks on the fifth hole during the third round of The Northern Trust at Liberty National Golf Club on August 10, 2019 in Jersey City, New Jersey. (Photo by Jared C. Tilton/Getty Images)

By Sam Weinman
JERSEY CITY, N.J. — On Saturday at Liberty National Golf Club, after a heckler had called out to him from a luxury suite above the 18th hole, Bryson DeChambeau had apparently reached his tipping point. He walked to the edge of the green to address the man directly.

“It’s more than just me,” said DeChambeau, looking up at the stands, speaking calmly but firmly. “There’s a lot going on out here.”

Turns out, DeChambeau was just getting started. A day after fans and fellow players roasted him on social media over clips showing him taking an inordinate amount of time to play two shots in the Northern Trust, DeChambeau offered a passionate defence of his perceived pace of play in a media session noteworthy for how much he had to say, and how little prodding it took.

“I play a different way out there. I take my 40 seconds that’s been allotted, sometimes over, absolutely,” DeChambeau said after his third-round 71 put him at six under, eight shots behind leader Patrick Reed. “Totally agree. It’s maybe 5 percent of the time. But I’ll tell you that it’s really kind of unfortunate the way it’s perceived because there’s a lot of other guys that take a lot of time. They don’t talk about this matter, and for me personally, it is an attack. … People don’t realize the harm they are doing to the individuals.”

The defending champion of the Northern Trust admitted to stewing over the criticism from fellow players such as Ian Poulter and Eddie Pepperell for much of his third round. Among his main points: That he’s not as slow as people think; and that he’s unfairly targeted, even as the problem persists beyond him.

“There’s a deeper issue here, and I’m somehow being singled out,” DeChambeau said.

DeChambeau said the two clips in question from Friday’s second round required context. One, an eight-foot putt that he took two minutes to hit, was an instance in which he was ready to play and his caddie called him off; the other, a pitch shot from 70 yards, was an instance in which he needed to wait for a group on another tee to hit, and in which he had to step off the yardage because the area wasn’t marked on yardage books.

“Again, another 1 percenter or 5 percenter, whatever you want to call that,” he said. “Most of the time I am doing my absolute best to get to that next shot.”

Worth noting is that for all of the vitriol directed at DeChambeau online, including from other players, no one has spoken to him about the problem directly, he says. DeChambeau said he too wants to remedy the slow-play problem on tour, and welcomes conversations with some of his critics, but preferably in person.

“We are all trying to do our best to play well and make our livelihoods and win tournaments, right,” DeChambeau said. “But when you start attacking people on Twitter, it’s like, come on, dude. Let’s have some more balls to come and speak to my face about that.”

Justin Thomas was one of DeChambeau’s playing partners on Friday who appeared visibly irritated during the round. He didn’t criticize DeChambeau directly on social media, although he responded to those who did. Speaking on Saturday, Thomas acknowledged DeChambeau has improved his pace, but his process is still problematic. For instance, DeChambeau claims that he counters the time he takes over shots by moving quicker to his ball, sometimes even jogging. Thomas said that argument doesn’t hold up since he still doesn’t begin preparing for his shot until it’s his turn.

“If you walk faster than anyone to your ball but are still a hole-and-a-half behind, it’s not working,” Thomas said.