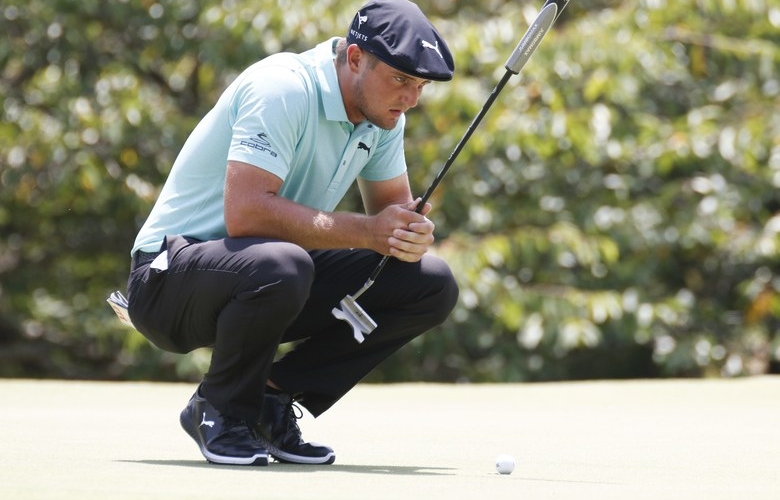 By Alex Myers
Brooks Koepka might want to sit down for this. Then again, there’s a good chance he’s already seen a pair of viral videos showing Bryson DeChambeau taking an inordinate amount of time to play a couple of shots during Friday’s second round at the Northern Trust. Either way, we’re pretty sure Koepka won’t be happy about them.

In addition to being the world’s best golfer, Brooks has also become the game’s most outspoken critic of slow play on the PGA Tour. In fact, earlier this year he criticised DeChambeau specifically for his lengthy pre-shot routine in which he calculates things like air density in addition to the usual yardage and wind.

“I just don’t understand how it takes a minute and 20 seconds, a minute and 15 to hit a golf ball; it’s not that hard,” Koepka said at the time.

Well, then he really won’t understand this. The first video shows DeChambeau taking more than three minutes to play a 70-yard shot.

anyone need a nap?

here’s DeChambeau pacing off a 70-yard shot which took over 3 minutes to hit (couldn’t post the entire video it took so long) pic.twitter.com/7A3Azeftyu

To be fair, it was from an unusual spot, but still. . . . And if possible, the next one is even worse. DeChambeau takes more than two minutes before attempting an eight-footer—and missing.

For golf fans, it was hard to watch. But imagine how much worse it was for DeChambeau’s playing partners, Tommy Fleetwood and Justin Thomas? Let’s just say neither looked thrilled.

The good news (we guess?) is that Koepka has plenty of support in the anti-slow-play community on Twitter. Here are some of the responses by fellow tour pros to DeChambeau’s deliberate display with two-time European Tour winner Eddie Pepperell going as far as to calling Bryson a “single-minded twit.”

And after all that miss read it by 2 cups ??‍♂️

THIS HAS GOT TO STOP!!!!! @PGATOUR if you don’t do something about this, SHAME ON YOU!!! As a member, I’m OUTRAGED you can tolerate this. You talk about “protecting the field”, then protect it by penalizing/DQing this type of behavior!! ENOUGH!!!

Andrew I’m sorry you’ve stopped watching the @PGATOUR. There are a few players that continually disrespect their fellow pro’s and continue to break the rules without a conscience. It should be self policed but clearly this won’t happen.. so disappointing it hasn’t been stopped. https://t.co/yxfF2fFZ2D

All the governing bodies need to come together and find a solution. It ruins the game for players, fans that watch live plus at home on TV. Something needs to be done and done now

Just look at Tommy and Justin, both looking completely bored. Slow players do this to their playing partners making the game less enjoyable. Problem is, the unaffected single minded twit in this instance, doesn’t care much for others.

Slow play is “slowly “ ruining the game of golf. It’s time the people that can do something, did something. Having said that , the players that are pathetically slow should just have more respect for their playing partners. And get on with it!

How is this ok???
Snoozeville
Why is nobody doing anything?@PGATOUR
Consideration for his playing partners is absolutely 0. https://t.co/jCDZoU4JgG

And the LPGA’s Christina Kim had a pretty funny jab at the former physics major:

He must have failed to denote the fact that after TWO MINUTES the earth’s turned on its axis and thus had an effect on the gravitational pull on the slope of the putt. Then he pushed it. https://t.co/QeHSJhCTNQ pic.twitter.com/3fYOmXLfZv

Kim also noted the LPGA has assessed some slow-play penalties this year (Sounds like a good idea!), and she was impressed by Thomas hanging in there as he did. Thomas acknowledged it wasn’t easy:

Of course, DeChambeau isn’t the only slow player out there. Others like J.B. Holmes, Ben Crane, and Kevin Na have been harshly criticised through the years, but these videos of the five-time PGA Tour winner are particularly damning. DeChambeau has defended his pace of play in the past in part by saying he walks faster to his golf ball, which allows him more time once he arrives there. You don’t have to be a physics major, though, to know that math isn’t adding up.