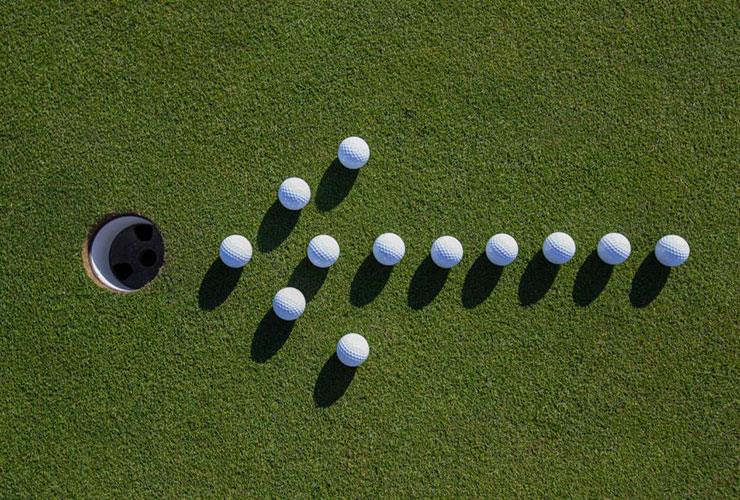 By Luke Kerr-Dineen
If there’s one thing golfers of every level — from tour players to the most casual recreational golfers — are looking for it’s hitting more greens in regulation. No statistic correlates more with golfers’ overall score, and everything is a means to that end.
But how do you actually do it? A good golf swing is important, of course, but as No. 1-ranked teacher Butch Harmon explains, that’s far from the only thing that matters. Implementing the right strategy on your approach shots will help you hit more greens and walk away with fewer big numbers even when you don’t.
Let’s dive into Butch’s advice.

1. Let the lie dictate your shot

When you approach your ball after your tee shot, the first thing you should do is evaluate your lie. If you’re in the fairway, you can proceed as normal. But if your ball is in the rough, take a good look at your lie. A flier — a ball that’s sitting on top of the grass — may help you hit the green. But if you find your ball sitting down, Butch says to remember that loft is your friend.

“Take a very lofted club. The loft on the club will help me jump the ball out of the grass. The strategy is to get the ball back in play and give yourself a chance for the next one.”
— Butch Harmon

2. Get your number to the middle

So many amateur golfers shoot the number to the pin, pick the corresponding club and don’t think about much else. Strange, Butch says, because pro golfers almost do the opposite.

“The flags they shoot at when they have the proper number, meaning the number they’re comfortable with for the club they want to hit. If they don’t have that number, they’ll dump it in the middle of the green.”
— Butch Harmon

Butch goes on to say that your default should be just that: get your number to the middle and play to it.

No golfer goes into a shot planning on hitting a bad one. Yet the smartest golfers plan for that eventuality anyway. When approaching the green, Butch says to identify where you least want to go and work backwards from there. He uses an example of a pin tucked on the left side of the green.

“Missing left, that’s the no-go zone, don’t even look at it. Pick a smartly conservative target behind the green that will give you room for error.”
— Butch Harmon

This is something many golfers do already, but it’s worth reiterating. Sometimes golfers get so laser-focused on the pin that they forget their surroundings, even when they may help you. Using the example of a right-to-left sloping green, with the pin tucked left, Butch explains that your best chance of getting your ball close isn’t by aiming straight at the pin, but using the slope.

“Aiming at the middle of the green and letting the ball take the slope will actually give you a better chance of a birdie putt than going straight at the flag.”
— Butch Harmon

5. Pick a target behind the green

You’ve probably heard the phrase “aim small, miss small.” It’s useful advice, but it can also be difficult when you’re aiming for bigger, wide-open spaces like the middle of the green.

“I’m aiming at that bushy tree in the distance. I know if I start my ball right there, when it lands, it will release down towards the hole.”
— Butch Harmon 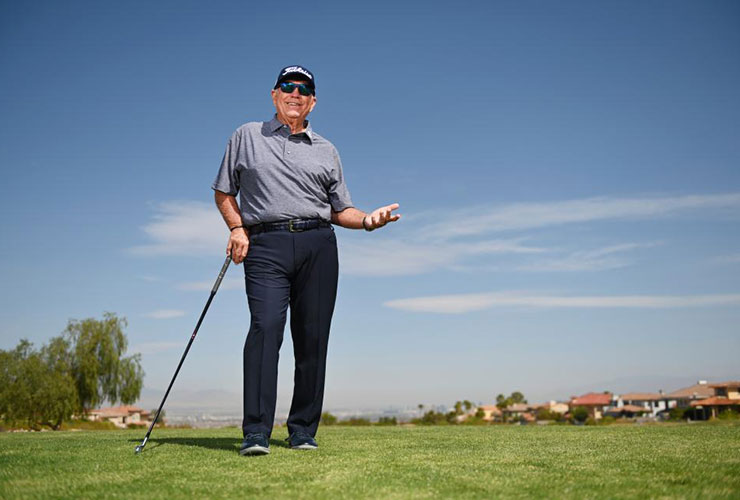 Amateur golfers under-club themselves all the time, Butch says. There’s simply no point lying to yourself about how far you hit the golf ball — unless you like missing the ball short. It doesn’t matter how far you hit it, it matters that you know how far you hit it. If you’re not sure, then when in doubt, club up.

“Very seldom do I see players take enough club, they take the club they need to hit absolutely perfectly. One of the best strategies I can give you is, if you think it’s a 7-iron, take a 6. If it’s a 6, take a 5.”
— Butch Harmon

7. Sometimes laying up is best

Sometimes, you’ll encounter a shot you simply don’t like the look of. Maybe there’s water or a bunker — or both — short of the green, and your swing isn’t feeling great that day. Rather than forcing yourself to hit a shot that feels uncomfortable, Butch says to listen to what your emotions are telling you and choose a different path.

“Take a wedge, lay up, that way you can pitch it on and still give yourself a chance to make a par. If you use the right strategy, you’ll be able to avoid those high numbers.”
— Butch Harmon

8. Bogeys won’t kill you — doubles and triples do

A common theme in all Butch’s advice so far is to think about the shot after the one you’re about to hit. Your goal is to leave yourself a low-stress next shot. That’s true when you’re in the middle of the fairway, Butch says, and even more important when you’ve missed the short grass.

“What you’re trying to do is take double-bogey and triple-bogey out of play,” Butch says. “That’s your main goal, getting yourself out of trouble and back into play.”
— Butch Harmon

Along those lines, Butch’s best advice can be summarised simply.

“Don’t be a hero! You’ll end up being a zero. Play the right shot.”
— Butch Harmon

It’s tempting to ignore it, especially after you’ve hit a good drive and smell blood in the water. But good golf is boring golf, and it’s not the spectacularly good shots that lead to good scores. It’s knowing how to avoid the spectacularly bad ones.

And finally it’s worth remembering the advice Butch started with, and returns to frequently throughout: check your ego. It doesn’t matter how you get there, all that matters is that you arrive at the destination safely. Your scorecard will thank you for it.

“There’s only a box that requires a number in it, not a ‘how you did it’.”
— Butch Harmon

Good advice from the best coach around that the rest of us would do well to follow.

You may also like:
Get your FREE November issue of Golf Digest Middle East here
Crunch time on the LPGA Tour season
Morikawa on his struggles during 2022
Claude Harmon III on life inside the LIV Golf ‘family’
Rahm and Fox set to join Rory at DP World Tour Championship
Shergo Al Kurdi on life as a LIV Golf alternate
Kiradech set for Asian Tour return
Muscat is a must-see for a stay & play on the UAE’s doorstep
R&A reiterates stance on Turnberry
New date for Irish Open on 2023 calendar
Who won what over the course of LIV Golf’s first season
Scotland’s ghost course is a golfing mystery
The seven ‘scariest’ moments in golf
Atthaya becomes world No. 1 at age 19
Harrison Crowe claims Asia-Pacific Amateur
WATCH: Highlights from the LIV Golf finale
Wrapping up Year 1 for LIV Golf
DJ pulls the final Punch at LIV Golf Team Championship