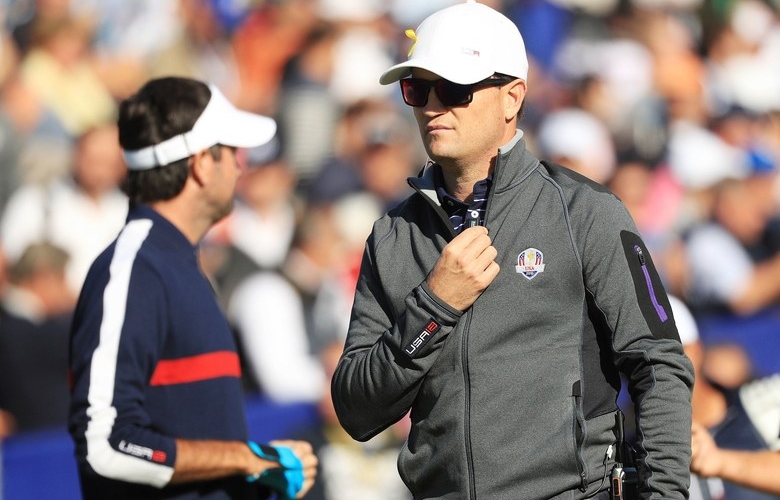 Zach Johnson served as a vice captain for the U.S. team during the 2018 Ryder Cup at Le Golf National outside Paris. (Mike Ehrmann)

Golf Digest has learned that captain Steve Stricker soon will name Davis Love III and Zach Johnson as vice captains for the September matches at Whistling Straits in Haven, Wis.

Stricker, captain of the winning 2017 U.S. Presidents Cup team, and Johnson served as assistants to playing captain Tiger Woods at last month’s Presidents Cup in Australia, with Stricker taking over as acting captain when Woods competed. The American team rallied from a two-point deficit in the Sunday singles to win for the eighth straight time, beating the International team, 16-14, at Royal Melbourne Golf Club.

Johnson, who is a member of the Ryder Cup Committee, also was a Ryder Cup assistant to captain Jim Furyk in 2018 in Paris, where Europe scored a convincing 17½-10½ victory.

Furyk already was announced as one of Stricker’s vice-captains, part of the U.S. formula to retain the most recent two captains as assistants. That made Love’s inclusion automatic after captaining the winning U.S. Ryder Cup team in 2016 at Hazeltine National.

At least one more assistant will be added, and like Johnson, it will be someone ostensibly inserted into the pipeline for a future captaincy. The list of candidates likely would include Phil Mickelson, provided he doesn’t make the team or get selected as a captain’s pick, Matt Kuchar and David Duval, both who also served as assistants to Furyk.

Also with a chance to be considered, depending on who qualifies for the 2020 squad, are Stewart Cink and Justin Leonard, each a winner of the Open Championship.

Love, a two-time Ryder Cup captain, was one of Stricker’s vice captains in 2017, but he was not part of the U.S. contingent in Australia last month. He told Golf Digest that was because he expressly said to Woods he did not have to reciprocate and include him on the team after Love recruited Woods as an assistant in 2016.

Contacted via email, Stricker said that no date for an official announcement of assistants has been set and otherwise had no comment. This year’s Ryder Cup is Sept. 25-27.