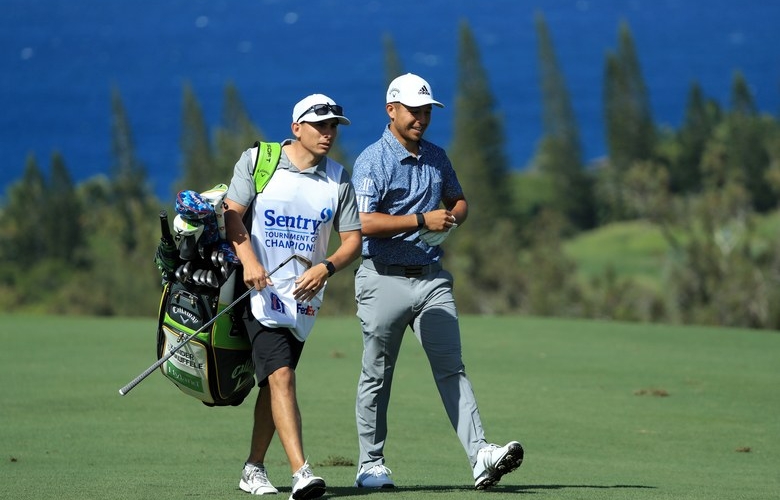 KAPALUA, HAWAII – JANUARY 05: Xander Schauffele and Austin Kaiser walk on the fourth hole during the third round of the Sentry Tournament Of Champions at the Kapalua Plantation Course on January 05, 2020, in Kapalua, Hawaii. (Photo by Sam Greenwood/Getty Images)

By Brian Wacker
KAPALUA, Maui — A two-putt from 43 feet was all that stood in the way of Xander Schauffele winning for the fifth time in his PGA Tour career and for a second straight year at the Sentry Tournament of Champions on Sunday.

Then, as he put it, stupidity got in the way.

Schauffele gunned his first putt on the par-5 18th at the Plantation Course at Kapalua Resort eight feet past the hole. Then he missed the one coming back, too.

“I should have won the tournament,” he said. “I know it. Everyone knows it.”

Instead, Schauffele went to a playoff with Justin Thomas and Patrick Reed, tied at 14 under.

He lasted just one hole.

After reaching the par 5 in two again, Schauffele left his 100-footer from the front of the green 23 feet short when he failed to negotiate the swale running through the putting surface. Schauffele went on to make par but was eliminated when Thomas and Reed each made birdie.

“I got gusted a little bit on that first putt and was convinced that it was right-to-left kind of coming back even though it was a pretty straight putt,” Schauffele said. “I was a little dumbfounded when I missed the hole by half a cup. If I maybe took a little more time, maybe called [my caddie] Austin in, just stuff in the moment that I wasn’t really aware of.

“Same thing in the playoff. I was kind of spooked by my first putt going so far by [in regulation], I left my playoff putt 25 feet short. It was just childish, and you try to learn from it.”

That he was even in a position to win was the result of another bad shot—Thomas, leading by one on the 18th, inexplicably hooked his second shot into the hazard, thus opening the door for Schauffele.

Schauffele followed by hammering a 3-wood from 310 yards down the hill and onto the green on the majestic finishing hole. Even after Thomas took a drop and pitched to just inside 10 feet, the tournament was there for the taking for Schauffele.

“J.T. was right there, but under the circumstances, I should have closed it off, and I didn’t,” Schauffele said. “I kind of did everything I was supposed to do until the last moment, which sucks. But this is another learning experience, and I guess I’ll have to work on some wind putting.”

Schauffele would have been the first player to successfully defend at the Plantation Course since Geoff Ogilvy in 2010. Instead, Thomas won for the third time in his last seven starts.

“This sucks,” Schauffele said. “Maybe I need just a kick in the ass to sort of wake up and do the right things most of the time. Yeah, this kind of burns a little bit, but overall happy with how I handled myself.”