With golf on hold, tour pros and their support teams are slowly adapting to the new norm 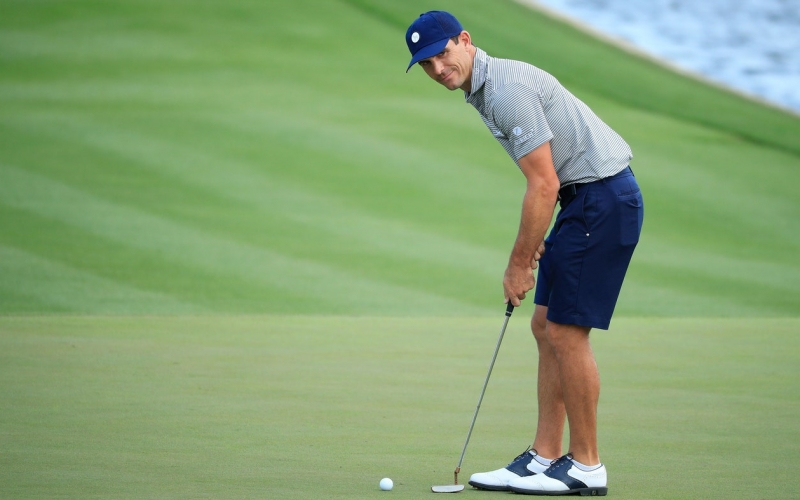 By Brian Wacker
Professional golf remains on hold. When that will end no one is quite sure. Several weeks. Several months. Tournaments on the PGA Tour are cancelled through the AT&T Byron Nelson in mid-May, and the year’s first two majors, the Masters and the PGA Championship, are postponed. The U.S. Open and Open Championship are on—for now—but that could change. A call with the PGA Tour’s Player Advisory Council, during which further details of what the future holds are expected to be discussed, is scheduled for Thursday afternoon.

On the bigger stage of life, it’s all relative given the seriousness of the growing COVID-19 pandemic. Still, the PGA Tour and other tours around the world are a travelling circus, with many moving parts and people beyond those hitting the shots.

It has been almost two weeks since the Players Championship was cancelled after the first round and subsequent tournaments followed suit. So what happens when the music stops, the big top folds up and no one is certain when the show will go on? Answers vary, depending on who you are and what you do.

Golfers, like athletes in any sport, are creatures of habit. It’s one thing to have that routine disrupted because of injury—there’s generally a definitive timeline for a return—but it’s another when that window of returning to normalcy is more nebulous. So how are PGA Tour players filling their time now? A look at social media suggests in numerous ways.

With @PGATOUR on hold watch my amateur cooking as I fight boredom in isolation. Starting off simple with eggs but things will get serious. Here’s Ep 1 of my first IGTV series #CookingWithTheLahiris #currypower #homecooking #ifIcancookYoucancook #yumsolation pic.twitter.com/T24POCb5J2

A handful of players have taken to Peloton—Rory McIlroy and Billy Horschel have been most furious in their stationary bike duels in a sort of redux of their 2007 Walker Cup match. Unlike 13 years ago when they split a pair of high-octane singles matches, however, McIlroy has been mopping the floor with Horschel this time.

Love what we started/created! Let’s keep it going! @McIlroyRory turn to pick the challenge next. 0-2 against him so far. Maybe 3rd times the charm for me!🤷‍♂️🤞💪 @onepeloton @alextoussaint25 pic.twitter.com/4LllY8NtrY

Some have been practicing, though even that’s been made more difficult in recent days in South Florida and elsewhere with courses ordered closed by government officials. Of course it helps when you have a simulator in your man cave.

Others are giving (free!) lessons, like these from Padraig Harrington.

Going live on #twitch. Come join, ask me questions, help get your mind off of things in this scary time. https://t.co/KK7heaXzt2

And someone has to mow the yard. Cameron Smith does it better than most.

A week and a half of isolation, looking good. Stay safe everyone, if anyone’s bored, Look after your lawn, takes a bunch of time and gets your mind off things for a while!

RELATED: 9 high-profile players who have some catching up to do when the PGA Tour resumes

“It took me three or four days to wrap my head around everything and get out of my middle-of-the-season mode and realize I’m going to be home for a while,” Horschel said. “Right now, I’m not even thinking about golf.”

Many still are, though.

A few hours down the road from where Horschel lives in Ponte Vedra Beach, Fla.—also home to the tour’s headquarters—is another tour pro hotspot: Jupiter and the surrounding area in South Florida. While golf courses across Palm Beach, Broward and Miami-Dade counties have been ordered closed in response to the region’s increasing cases of coronavirus—Florida has nearly 1,700 cases so far, including 22 deaths, with more than half of those total cases coming from those three counties—Joey D Golf Sports Training Center, run by its eponymous owner Joey Diovisalvi, is as well, though it has been available to players on a limited basis.

It’s a private facility that also includes simulators, a putting green and club-fitting stations spread out across a 10,000 square foot warehouse. Adjustments have been made to limit occupants per local regulations, but some top players have been able to continue work on their games and their bodies. On Wednesday, Dustin Johnson, Justin Thomas and Bud Cauley were among those who stopped by.

“It took me three or four days to wrap my head around everything and get out of my middle-of-the-season mode and realize I’m going to be home for a while.” — Billy Horschel

It’s depressing, Johnson mused to Joey D about the news.

Diovisalvi concurs, adding that he and his staff are taking precautions and following guidelines to stay healthy. But with no definitive end in sight for COVID-19, he and his staff also provide players training regimens that are more fit for the offseason, rather than midseason.

“We’re working on way more things than we do in a tournament week,” Diovisalvi said. “If they’re a little sore, it’s OK.”

A half-hour north of Joey D’s gym is the Floridian Golf Club. It’s closed, like all the other courses in the area, but Claude Harmon III, who teaches out of there and works with a number of players, including Brooks Koepka, is trying to adjust to the new normal, too.

“I’m not giving any lessons at the moment,” Harmon said. “I think everyone is trying to do what they can and limiting interaction is the wisest thing to do.” 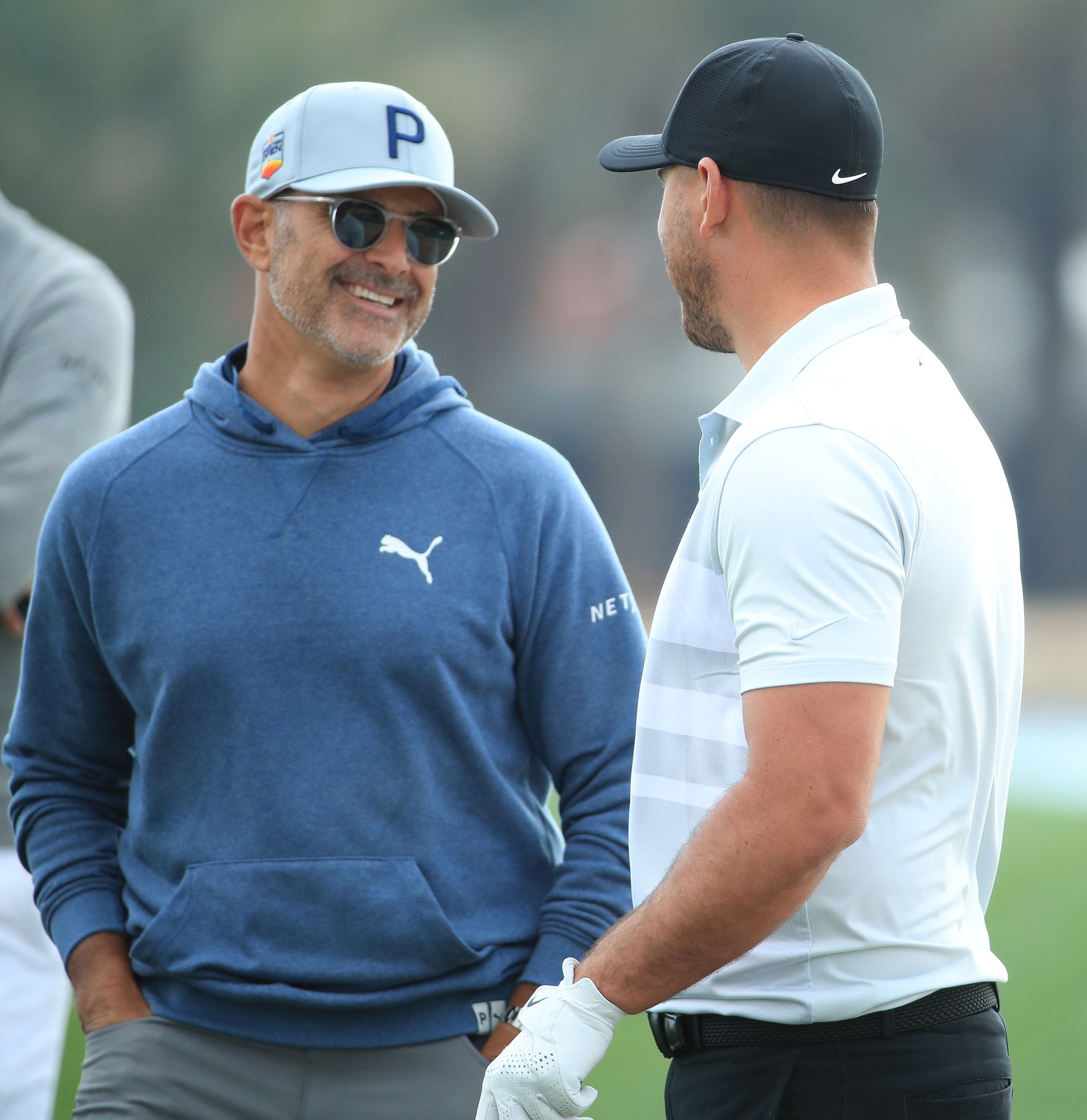 Andrew Redington/Getty Images
Harmon says he is talking to Koepka almost daily, as well as several other tour pros he works with.

Still, Harmon is keeping in touch with his players. Sitting still is not something any of them do well, and the same by extension is true for their coach.

“I talk to Brooks almost every day. Si Woo Kim sends me videos of his swings from his house in Dallas. Everybody is trying to stay sharp. Golfers are a lot like a course, you can’t just stop maintaining it. We’re trying to find ways to continue to do stuff, but do so without hurting other people. The weather is perfect—it’s 80 degrees and the sun is shining—and you think you should be able to go out and do this stuff, but now everybody has to pitch in.”

Meanwhile, the rest of golf sits and waits like the rest of country for things to play out.

“Business, in general, has slowed dramatically,” said David Winkle, president of Hambric Sports, which represents a number of top players, including Johnson. “There are fewer phone calls and emails. Everyone’s taking this seriously and hunkering down.” 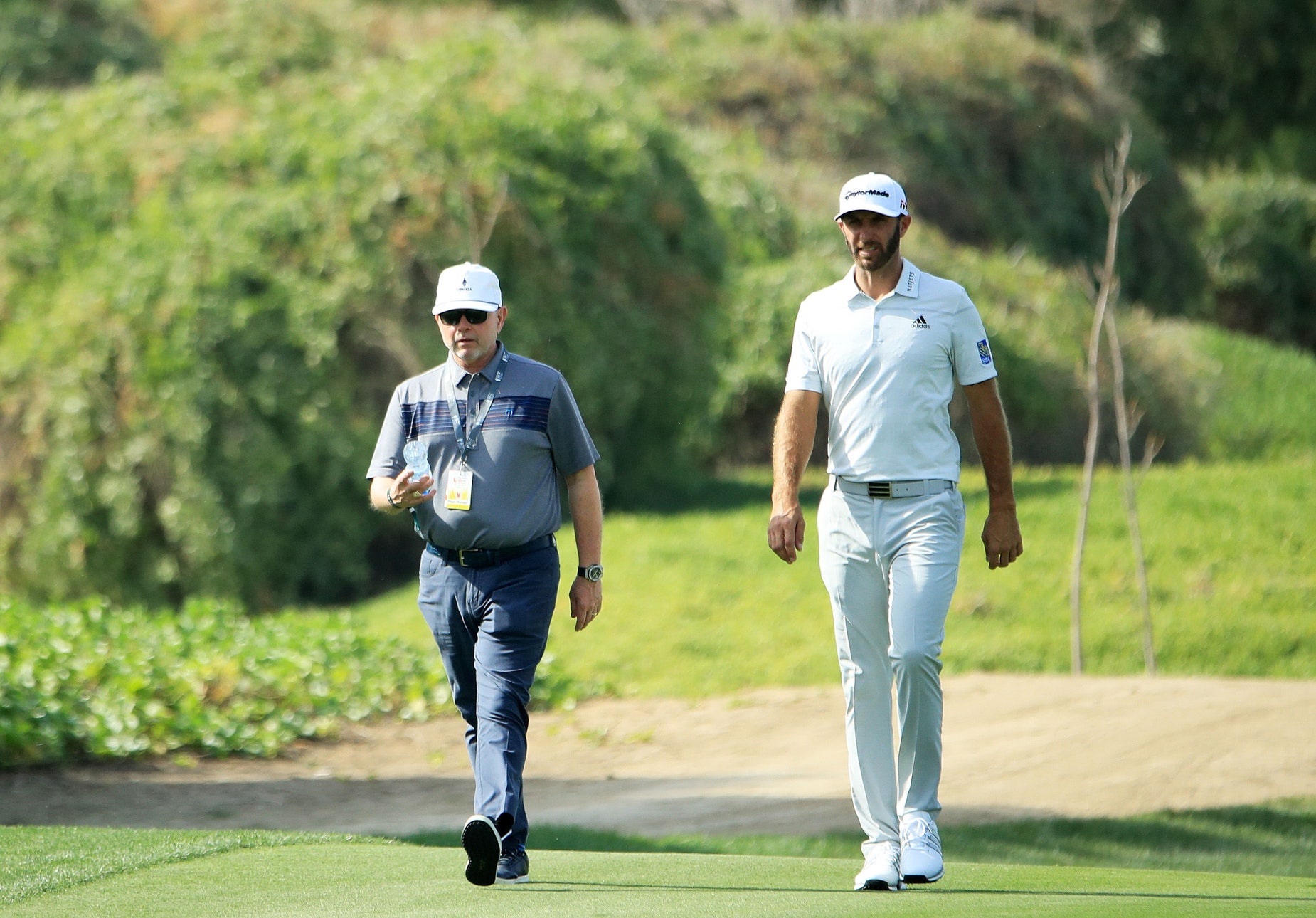 Winkle added that he normally gets 100-plus emails and calls a day and that he typically spends 75 percent of his time on the road. Now? He’s in Dallas, working from home, when there is work to do.

Similarly, caddies are also used to being away. The time at home is nice but it comes at a price: It means not being paid.

When a player misses a cut, he doesn’t make money, but there are lucrative equipment and sponsor deals to ease the burden. The guys carrying their bags? Not so much. No tournaments for two months means suddenly no income.

“It’s case by case [whether some guys are still getting paid or on contract],” notes a looper of one top-20 player. “But for us there’s nothing for now.”

In the meantime, he’ll continue to fill the hours playing with his kids, spending time at home and waiting like everyone else to see what’s next.

“I doubt any of us will be getting anything,” the caddie said. “It’s part of the risk of our job.”