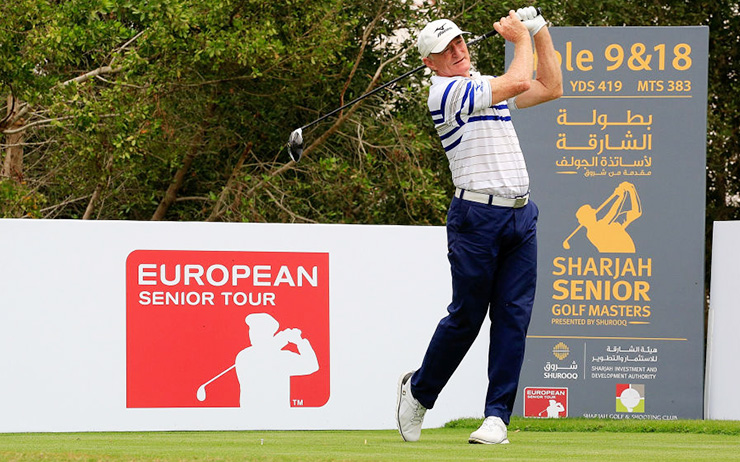 Chris Williams has ignited the new European Senior Tour season with a course record 65 in the opening round of the Sharjah Senior Golf Masters at Sharjah Golf & Shooting Club.

The 57-year-old South African took full advantage of an early tee time in rattling off two eagles and five birdies in his pace-setting seven-under round, a stunning two-lap loop of the Peter Harradine-designed nine-holer which edged the previous record by a stroke.

Two bogeys meant Williams’ round wasn’t flawless and will see American Clark Dennis, Swede Magnus Atlevi and Dane Steen Tinning start Friday just a shot back after the trio carded matching 66s. A group of five were hot their heels at five-under-par, setting up the prospect of a thrilling contest over the weekend in Sharjah.

Welshman Stephen Dodd, a UAE regular, fired a four under 68 to lead the list of other notable first round scores. Barry Lane carded a 69 while defending order of merit and Senior Open champion Paul Broadhurst was also well in the hunt after a 70. Des Smyth has work to do after opening with a two-over 74 while Italian Costantino Rocca signed for a 75.

SEE ALSO
Rocca: European Senior Tour must ‘cultivate’ sponsors and not get greedy

Williams, who has one previous win on the European Senior Tour at the 2011 Aberdeen Brunei Senior Masters, got off to the perfect start with a first hole birdie and never let up on the smooth putting surfaces.

“There wasn’t much wind out there this morning and that’s when you’ve got to post your scores because it looks like the wind blows a lot here in the afternoon,” said the former Sunshine Tour player who negotiated the four par 5s in five-under-par, including eagles on the 4th and 15th.

“I birdied the first hole and that kind of set the trend for the round. I felt more relaxed after that and the two eagles were nice bonuses.

“I sunk a long putt on the 4th and holed out from the bunker on the 15th so you’ve got to be pleased with that! Two eagles will always get your score down no matter what else you do.”

Tinning, meanwhile, got his putter going, a solitary bogey the only blemish in a round that included seven birdies.

“I’ve got a few new things going on with my putting and they all worked very well today. I’ve been practicing hard to try to be prepared for the first tournament so this is a great way to start.

“The course is great fun to play. At times you’ve got to really be careful but at other times there are birdie chances. The greens are rolling very nicely so you’re going to get low scores when the greens are like this.”

“The course is set up for good scoring and I think spectators can expect to see some really good scores over the weekend,” he said.