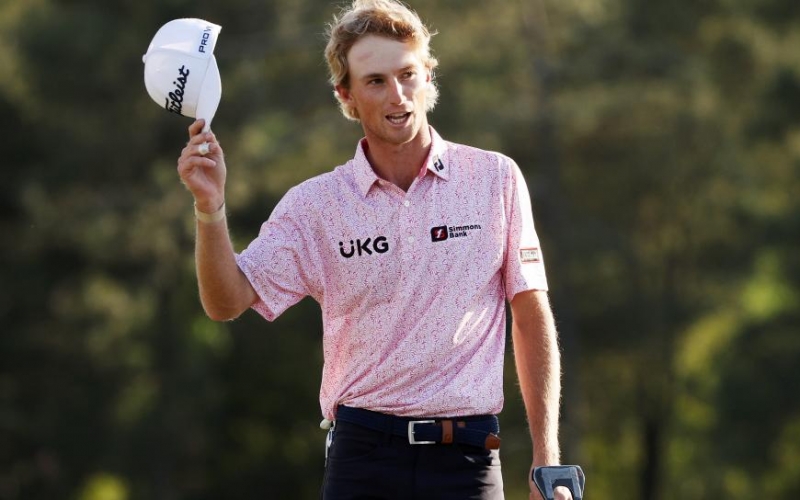 Kevin C. Cox
Will Zalatoris waves to patrons after the final round of the 2021 Masters, where he finished runner-up in his debut.

By Daniel Rapaport
Will Zalatoris began the 2020-21 season without PGA Tour status and finished it as the PGA Tour Rookie of the Year.

The tour made it official on Monday, but the 25-year-old was an overwhelming favourite to win the award for two reasons. First, there simply weren’t many candidates—due to the COVID-19 pandemic, the Korn Ferry Tour combined its 2020 and 2021 campaigns into a “super season,” meaning there were no players promoted to the PGA Tour last fall. As such, Zalatoris, runner-up Garrick Higgo and Rafael Campos were the only players considered rookies for the 2020-21 season.

The second reason he was a shoe-in for this award was his remarkable play throughout the season. It began at the 2020 U.S. Open at Winged Foot. Zalatoris received an exemption into the major due to one-time COVID rules that, in the absence of open qualifying, invited a number of Korn Ferry players to participate. He finished T-6 that week, which earned him a spot into the following week’s Corales Puntacana Resort & Club Championship, where he finished T-8 and was officially off and running. By the end of the fall he’d earned special temporary membership for the remainder of the 2020-21 season.

Zalatoris’ strong play continued into 2021; all told he posted eight top-10s and 14 top-25s in 25 starts—including a solo second at Augusta National, where he finished one back of Hideki Matsuyama in his bid to become the first player to win their Masters debut since 1979.

Zalatoris was not eligible for the FedEx Cup, however, as he did not begin the season as a PGA Tour member and did not win an event, as Higgo did at the Palmetto Championship. He is the first golfer to win rookie of the year as a special temporary member of the tour since Charles Howell III did it in 2001.

The new rookie of the year spoke with Golf Digest about adjusting to competing at a new level, his crazy 12 months and what he’s done with some much-needed off time.

It wasn’t exactly a shock, but I have to imagine seeing your name on the list of rookie-of-the-year winners alongside some of the all-time great is pretty cool.
Will Zalatoris: I’m ecstatic. I went to Wake Forest on the Arnold Palmer Scholarship, so winning an award with Mr. Palmer’s name on it is not lost on me. If you’d have told me I’d be PGA Tour rookie of the year for 2021 when in April 2020 it looked like I was going to have to spend two years on the Korn Ferry Tour, that’s a pretty cool spot to be in.

When you look back at the last 12 months, was there a moment when you thought to yourself for the first time that something like this was possible? That you could rip off a run?
WZ: It started the week before the U.S. Open in Chicago (at the Korn Ferry Tour event). I’d finished second, just missed out on a playoff where Curtis Thompson won. But that last day, I just, I went absolutely crazy. I think I made eight birdies and an eagle or something stupid-—the fish I’m sure has gotten bigger over the year—but I just remember that last round, I felt like I was birdieing every single hole down the stretch. It gave me belief for the Open, and at the Open I had nothing to lose. And once I had that attitude of having nothing to lose, that all I can do is go out and earn a tour card—I think really starting in Chicago, that’s what really propelled me.

One of the difficulties of playing the PGA Tour for the first time is learning the golf courses. Knowing your history with Scott Fawcett and DECADE golf, how much did statistics and satellite imagery help you navigate new venues?
WZ: Something that I looked at from my stats from last year is that I hit a ton of greens from 100-175 yards, which is no surprise, but I was hitting them like 30 feet from the hole. Basically what I was doing was just avoiding mistakes. I think part of that is the fact that I hadn’t seen these golf courses before. Something that Scott does a really good job of is making sure I go look at Shotlink and seeing the overlays of each flag on certain holes. Like a pin on the back-right on 16 at Sedgefield, to choose one randomly, guys hit it in the front-right bunker aren’t getting it up and down. OK, that impacts my target line. But then seeing guys in the back bunker are getting it up and down more than 50 percent of the time, that impacts my target. Now that I’ve had one go around these courses, and I’ll have the liberty of picking my schedule this year, it’ll be a big help come playoffs time so I won’t be so fried.

What’s the difference between a guy who’s kept his PGA Tour card six years in a row and a guy still grinding on the Korn Ferry Tour?
WZ: I actually had this conversation with a couple PGA Tour guys recently, and we all kind of gave a unanimous answer. I think the guy that spends six years on the PGA Tour versus the guy who’s stuck on the Korn Ferry—when I think back to myself, it was just a step in the journey. I was never satisfied with being on the Korn Ferry Tour. I always wanted to get to the PGA Tour. It’s not so much as wanting it more, it’s just nonstop wanting to be a student of the game. Learning, asking questions. If you’ve got the talent and you’re working on the right things, you’re going to get to the PGA Tour. It’s a little different but man, it’s so small. Just one week can change your life. That’s the frustrating part, guys keep banging on the door and they can get frustrated by it. Gotta stay patient, ask questions and be a student of the game. Find what the right things to work on are.

You were thrust into stardom at the Masters. All the sudden, you’re in these huge pairings. What’s that like?
WZ: After Augusta my anonymity was completely gone. I got paired with Billy Horschel and DJ the next week at Hilton Head and I was like yep, this is different. Literally, the very next week my anonymity was gone.

A little annoying having to watch the FedEx Cup playoffs from home?
WZ: I watched Patrick and Bryson duke it out and I watched the last day of East Lake. Obviously, I’d really felt that once I got a good recipe with my back to be able to perform, I knew I was playing really nice golf and would’ve love to been there. Rules are reules, I needed to go win one. Whether you think that’s right or wrong, the bar was set and I didn’t reach it.

The good part of that, if there is one, is you had some time off. What’d you do on the off weeks?
WZ: Kaitlin and I took a vacation with our dog for a few days, put the clubs away. Did a lot of rehabbing on the back to get it to 100 percent. Did a lot of reflecting on the year. It felt like it was non-stop, kind of reactive to things happening around me. I finally had time to sit down and think about what I needed to improve on as a player and a person, and how to improve. I think it was a really productive month.

What are those things? What do you need to do to improve?
WZ: I work with Josh Gregory for short game and putting. I love the guy, he’s practically an older brother to me. Crazy uncle is probably more appropriate for him. The thing that I love about him is we’re nonstop doing drills and games. Every week it’s a tweak here or there. It was more me, not Josh, me wanting to get better and wanting to go win immediately. Trying to win a golf tournament rather than letting it just happen. It took us a couple months to calm down. Like, you’re 25 years old, you’ve got three months left on the PGA Tour where your job is just try to win a golf tournament. You have the best job in the world. You have nothing to lose. Looking at the macro instead of the micro. Instead of trying to make the playoffs, trying to make the Ryder Cup, just go out and get better at golf. That’s the only thing I can control.