By John Huggan
Nov. 17, 2019 was a good day in the life of Tommy Fleetwood. With a final-round 65, the Englishman won the Nedbank Challenge in South Africa, beating Swede Marcus Kinhult at the first hole of a playoff. It was Fleetwood’s fifth European Tour victory, one that saw him rise to 10th in the world.

Now fast forward exactly two years. Today, the now 30-year-old has 38 players ranked above him. He still has five victories on the circuit that next week will become the DP World Tour. And, courtesy of a disappointing season on the PGA Tour, where he finished a lowly 137th in the FedEx Cup standings, he will be forced to seek invitations in 2022 to at least some of the biggest events on the game’s most lucrative path to greatness.

Fleetwood’s play in the four majors in 2021 was especially disappointing. A T-46 finish in the Masters was followed by a missed cut in the PGA Championship, T-50 at the U.S. Open and T-33 in the Open Championship.

Still, despite all of the above, the past year has not been a complete disaster for one of the most likeable figures in pro golf. For one thing, he missed only four of 18 cuts on the PGA Tour. And for another, although the endless hirsute Fleetwood hasn’t played particularly well (that is undeniable), as he tees-off in the last European Tour event of his or anyone else’s career, the positive signs are mounting. His four most recent starts have bequeathed four top-13 finishes, the best a T-2 at the Italian Open.

“I think I’m in good shape generally right now,” Fleetwood said after completing his final practice round for the DP World Tour Championship on Wednesday. “My game is in a better place. In life and sport there are always people who are doing great and others who are struggling. I’ve been one who has struggled for a bit. But in the second half of this year, I’ve played much better. I’ve shot some good scores. And I’ve seen my game getting a lot more consistent. Especially in the last few events, my game has ‘stuck around’ for four days, which has not always been the case in 2021.”

MORE: European Tour to be rebranded DP World Tour in 2022

As ever in golf, the biggest problem for Fleetwood has not been a dearth of good/great shots. The deterioration in his performance has had more to do with the lack of quality in his bad shots. In his case, that has been his driving. What was long a strength, this year became at times a glaring weakness. After ranking 13th, 12th and 24th in strokes gained/off the tee on the PGA Tour in 2018-2020, he fell to T-145 in 2021. 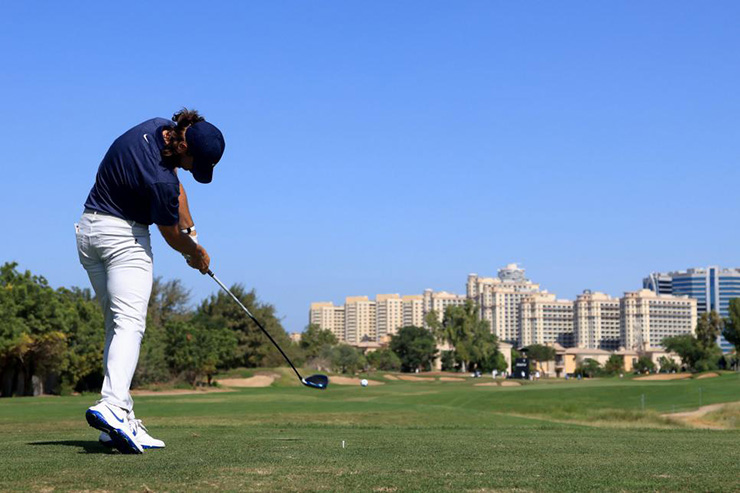 “Invariably, I was hitting one or two ‘wides’ that cost me,” Fleetwood said. “And when that is happening, you are always on the edge of waiting for that shot to come. It might be on the 18th, but it always seems to appear. My putting has also been a bit inconsistent, but in-between tee and green I’ve been OK, even if my results haven’t really been showing that. It’s at either end of the holes where I’ve let myself down. I’m getting there though. Up to last week I was in the top-10 on the European Tour putting stats, which is actually better than normal for me.”

Through what has been a tough last few months, Fleetwood has been consoled and encouraged by the mental boosts that have come with participation in the Open (his favourite event), the Olympics and, yes, even the Ryder Cup, from which he emerged with a 0-1-2 record. A stark contrast with his 4-0-1 effort in Paris two years before.

“I’ve had some big motivating moments,” he said. “The Open being back gave me a boost [he finished T-33]. Nothing makes me feel better than that event. The Olympics was an unbelievable experience [T-16]. The Ryder Cup was amazing. I’ve seen both sides of that event now. So I’ve been lucky to have so many great things to enjoy and take in amidst the struggles.”

All of which has been reflected in that recent surge in form that has given Fleetwood a “much better outlook” going into events.

“I really feel like I’m playing well,” he said. “I am executing the shots I’m describing and seeing. Over four days it is consistency is what is important. My lack of top-10s this year shows that I wasn’t too consistent. I have been on the fringe of things with a round to play in a few events. But then I’ve gone backwards rather than forwards. There was always a poor round in there, especially on Sunday when the course is set-up harder. That’s when any weakness tends to get found out. That was another part of my struggling.

“That’s how fine the margins are at this level of the game. Plus, the standard continues to get higher and higher. Even standing still you are going backwards. Add all that up and it is easy to look as if you are off-form.”

So the Fleetwood glass is half-full. Even the prospect of competing with less certainty on next year’s PGA Tour is failing to unsettle his current equilibrium.

“I think I’ll be OK in the States next year,” he said. “My schedule won’t be that different. The Ryder Cup gets me into some events. I will have to ask for some invites at events I hope will look kindly upon me. Then I’ll play in those I get straight into. I’m a big believer that, if you play good golf, you’ll find your way to where you want to be. On the other hand, it doesn’t matter what exemptions you have, play poorly and you’ll not be getting what you want in life. It’s that simple.”

And, of course, that complicated. Wish him well, one of the good guys.