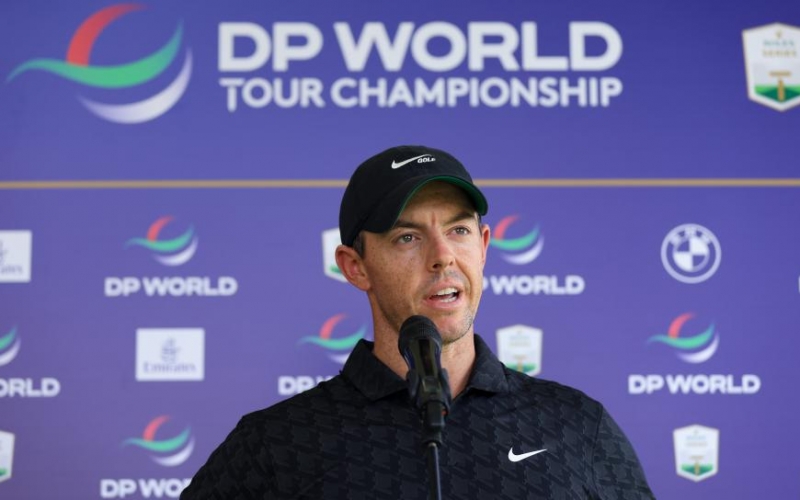 By John Huggan
DUBAI, U.A.E. — It should come as no surprise to anyone to hear that Rory McIlroy—a proud Irishman born and bred—is predisposed to all things green. But, as ever with the four-time major champion, there is more to that aspect in his character than casual preference. One of the most thoughtful members of golf’s elite, the Belfast boy has always been mature beyond his years. Asked about the size of the global footprint someone with his jet-set lifestyle can potentially leave in his wake, McIlroy revealed that he is almost 24 months into positively alleviating that issue.

“Two years ago, after I won in China [at the WGC-HSBC Champions], I flew back home privately,” he said in Dubai, where he will compete this week in the final “European Tour” event, the DP World Tour Championship. “It was just me on the plane and a massive sense of guilt came over me. ‘This can’t be good,’ I thought.

“When the R&A and the USGA brought out their distance insights report, the best thing they spoke about was the sustainability aspect of golf and how to make the footprint of courses smaller. So that is certainly something we can all do. If every other industry in the world is making a push towards going green, why should we be any different?”

Good question. And in search of an answer, McIlroy approached the GEO Foundation, which is involved in the encouragement of sustainability within golf.

“What I was trying to do is make all my travel—I wouldn’t self-profess to be an eco-warrior, but I’m someone that doesn’t want to damage the environment—around the world neutral,” McIlroy said. “How can I neutralise what I do?”

Provided with a few ways in which he could achieve that aim, McIlroy typically took things even further. On top of what it costs him to fly privately, he pays an additional amount (£150,000 this year) to make sure he is carbon neutral by Dec. 31.

“It’s something I have a conscience about and I take it seriously,” he continued. “Especially when you see some of the weather events that are happening. I live in a part of the world where hurricanes are prevalent and becoming more and more prevalent as the years go on. I think we can all play our part in some way or another. We play on big pieces of land that take up a lot of water that some argue could maybe be put to better use. This isn’t something I’ve talked to many of the players about. But for my own peace of mind, I know that when I do travel I’m not doing it to the detriment of the world that we live in.”

As ever, too, McIlroy is likely in the minority in placing so much emphasis on the issues the world’s politicians spent two weeks discussing at the recent COP26 conference in Glasgow, Scotland. Asked to comment, BMW PGA champion Billy Horschel and the defending champion here, Matt Fitzpatrick, had clearly given the matter a lot less headspace.

“It’s a bigger issue than me,” Horschel said. “Do I want to leave this place in a better place than I found it? Yeah. But I think we need to look at all scenarios before we make a decision. At the end of the day, travel is what I do for my job, and I try to do it responsibly. But for me to do what I want to do, I have to travel. Simple as that.”

“It’s not something I think about,” Fitzpatrick said. “It’s my job. If I couldn’t get on planes, I would probably play only about five tournaments a year.”

Moving right along, McIlroy was on more familiar ground when asked about the state of play between himself and long-time coach, Michael Bannon. For the last few months, the pair were—publicly at least—estranged, with McIlroy employing swing guru Pete Cowen. In turn, that relationship has apparently gone less than well, even if, in the wake of McIlroy’s emotional reaction to his poor play at the recent Ryder Cup, he almost immediately went out and won the CJ Cup in Las Vegas. Anyway, as of now, Bannon is back and Cowen is, in soccer parlance, “on the bench” if McIlroy feels any need for his advice. 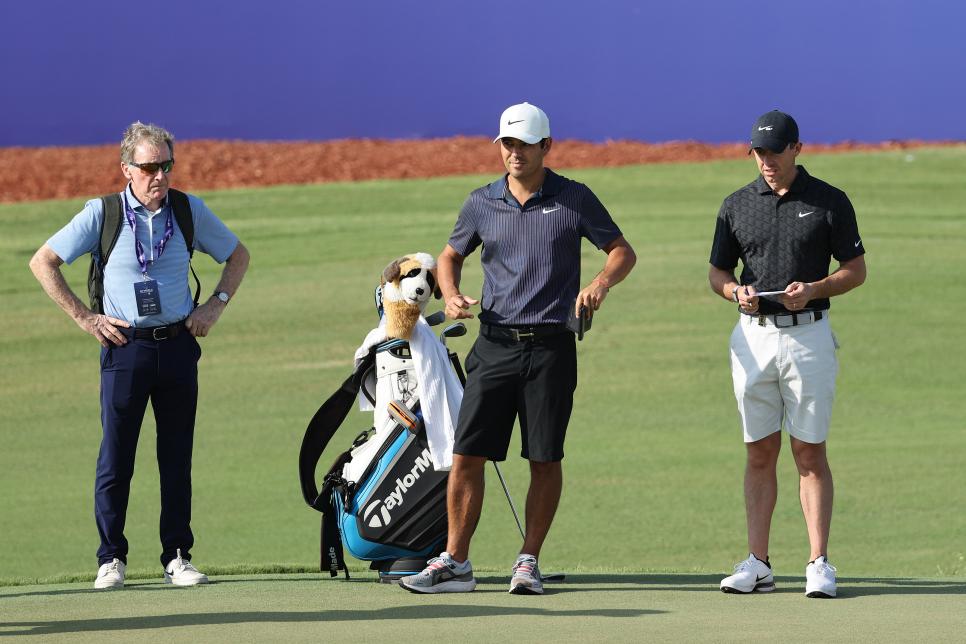 (Photo: Warren Little) Bannon back on the scene in Dubai.

“Michael has always been my coach,” McIlroy said. “He’s coached me since I was eight years old. He knows my swing and my game better than I know it at this point. And he’s always been there, even if he’s been in the background for the last six months. But in those two weeks in between the Ryder Cup and Vegas, I feel like I figured a few things out on my own, which sometimes you need to do. I’m not saying I won’t need help ever again and that I’ve got it figured out. This is about being myself and not trying to do anything other people do or what I can’t do.

“I went to Vegas with a little more self-belief, and I won that tournament, and that gave me even more confidence. So, if anything, Michael is more of a sounding board at this point. I say to him what I’m trying to do. And he tells me if I’m completely not right.”

Amid all of the above, one thing isn’t going to change, however. Yes, McIlroy was quick to acknowledge the benefits to rank-and-file members that will accrue from the overhaul of the “European Tour” brand and the emergence of the new “DP World Tour” that will start later this month in South Africa. But no, it will have little or no effect on his own schedule.

“It’s a great thing for this tour that those who compete here full-time have a place to play long into the future,” he said. “But I’m just going to play the same events I’ve played for the last five years or so. It may encourage me to add an event here or there, but for the most part I’ll probably keep doing what I’ve done the last few years.”

Indeed, sometimes in life you just have to green and bear it. Groan.