Why “Keeping Your Head Down” Is Killing Your Swing 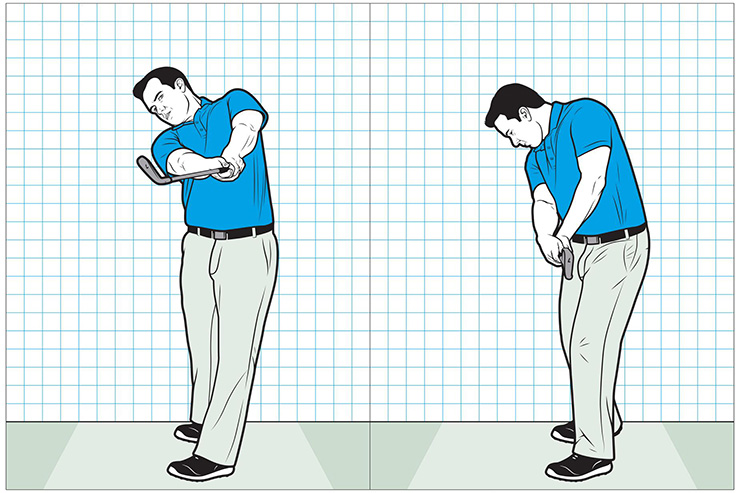 By Nick Clearwater
It’s probably a familiar scene in your foursome. Somebody (maybe even you) tops a shot and immediately offers a boilerplate analysis of why it happened: “I lifted my head.”

Well, maybe, but that isn’t why most shots are topped. In fact, a lot of times it’s the opposite problem. We measure thousands of swings at GolfTEC studios around the country, and we also have an extensive database of tour-player measurements to compare what they do with what you do. What we’ve found is trying to keep your head down is probably doing more harm than good. If you want to learn a skill that will keep you from topping it—and get you closer to hitting the same kinds of consistently good shots the professionals do—develop a tour-pro follow-through that involves a rotation of the head. Here’s how.

Pose like you see here (above, left)— legs straightened, shoulders and hips facing the target, head rotated in that direction, too, and the grip extended as far away from the body as possible—that’s key.

You’ll notice this is a significantly different look to the follow-through we see from many amateurs—especially if you’re trying to keep your head down through impact (above, right). When you’re scrunched up like that, you don’t have room to extend your arms, and that lack of extension puts you in poor position to make solid contact.

Keep rehearsing the tour-pro follow-through you see me demonstrating. Once you’ve burned the feel of it into your memory, hit some soft, slow shots while getting into that same position after impact. The closer you come to copying it, the easier it will be for your swing to bottom out in a predictable place every time.

Then you’ll no longer worry about having to make an excuse for your bad shot before the ball stops rolling. —With Matthew Rudy

Nick Clearwater, GolfTEC’s Vice President of Instruction, is based in Englewood, Colo.