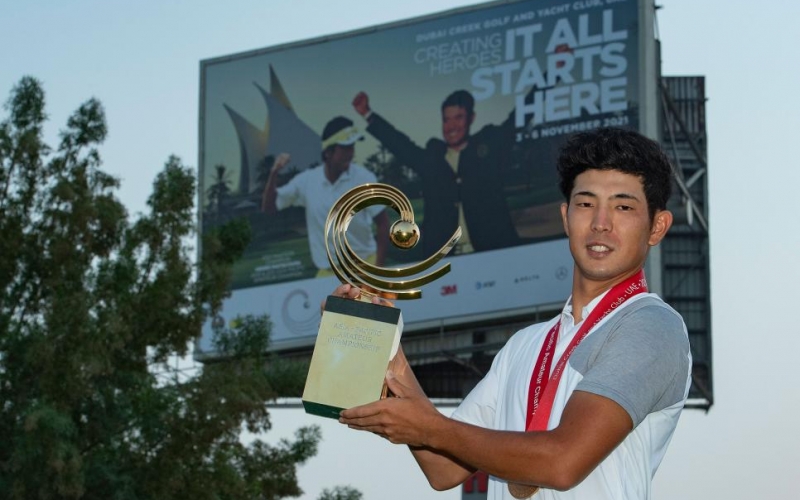 The slogan/motto/legend/promise that dominated just about every aspect of the landscape around the Dubai Creek Golf and Yacht Club is one the Asia-Pacific Amateur Championship can more than justify, no matter the definition of choice. A stepping stone. A life-changing moment. Call it what you will, the premier amateur event in this vast region has, since its inception in 2009, provided the ultimate springboard for any number of successful careers.

Jumping forward from the trips to the Masters and the Open Championship that are the immediate rewards for AAC champions, as many as eight future PGA Tour winners— Cameron Smith, Cameron Davis, Lucas Herbert, Si-Woo Kim, Hideki Matsuyama, C.T. Pan, Satoshi Kodaira and K.H. Lee—are proud alumnus of the tournament that next year will become a teenager.

The most notable name on that list, of course, is that of Matsuyama, the current Masters champion. Winner of the Asia-Pacific Am in 2010 and again in 2011, the now 29-year-old is the first male from his golf-crazy nation to win one of the game’s four most important titles.

But here’s the thing. While the likes of Matsuyama and the latest champion, countryman Keita Nakajima, garner the vast majority of the headlines, the aims and aspirations of the AAC are actually more about the competitive also-rans than those luminaries at the top of the leader board. Together, the tournament organizers—the R&A and Augusta National Golf Club—tick more than that obvious box.

“There were two sets of people in the field here at Dubai Creek this week,” says R&A chief executive Martin Slumbers, who, along with ANGC chairman Fred Ridley, attended all four days of competition. “One contains the players who are ready to win and find out if they are good enough to compete as professionals. But just as important for me and the values of the R&A … we want the game to grow, [and] this gives the rest of the field a glimpse into the level they have to get to. And to see how far off they are from the very best.

“We had countries here with sophisticated development systems, nations like Australia, India and South Korea. But we also had others who don’t have anything like that. For me, the biggest value in this event is seen in that second group, more than the guys who have gone on and won.”

Indeed, there is no doubting the R&A’s commitment. Before the COVID-19 pandemic brought the world to a halt, the St. Andrews-based organization held the inaugural AAC Academy at the Sentosa Golf Club in Singapore. A one-week comprehensive training camp, the aim was to enhance the capabilities of players from developing golf nations in an effort to advance their skills and, in time, create the buzz word used by many associated with this event and its counterpart in the Latin America Amateur Championship—“heroes.”

“We brought some of the best coaches, nutritionists and sports scientists from around the region, and we exposed the players to all of that coaching,” Slumbers says. “Our overall intention was to help them move up and give them the skills to be able to fulfill their own destiny and their own skill level. We are fortunate in that we hail from a country where golf is well-developed. We see the Masters. We see the Open. And we all know players who have played in those big events. But when you come out here to Asia it is as if those majors are on a different planet. Now, through the AAC, we’ve put them on the same planet. All of the things that have taken 100 years back home have happened in 12 years here. We’ve accelerated the process.” 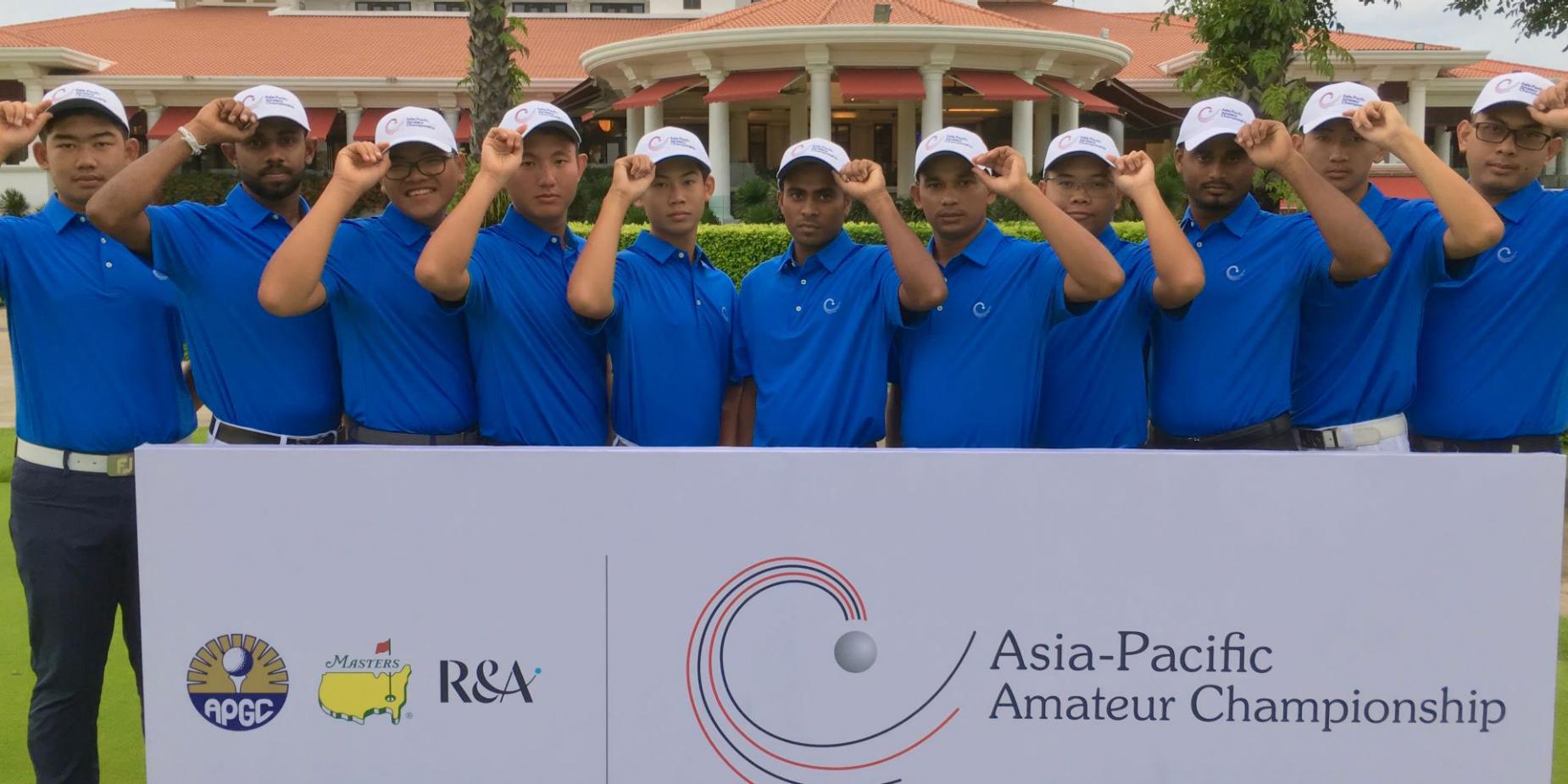 Photo courtesy of the R&A
In addition to holding the championship, the R&A has hosted an AAC Academy to help developing players receive access to better coaching and training.

That much is true, as evidenced by the reactions of Cambodia’s Pich Meta Peou and Vanseiha Seng. Both were part of the Singapore experiment, and both were in Dubai as better people and players as a result. Neither made the 36-hole cut, but the looks on their faces and the enthusiasm in their voices as they described their experience is proof enough of the success of the R&A’s mission.

“The Academy and this event has been so important to my development,” says Seng, 28, the only man who has played in all 12 AACs. “I feel I am a completely different player now. I knew how to hit the golf ball, but playing in the AAC and especially being part of the AAC Academy taught me such crucial elements of the game like course management, warm-up routines, physical training, what can be done with the equipment—the list goes on. Plus, to play at this level is so exciting. They make us feel so special when we play. And it has taken me to so any great places. I have made so many friends with players from other countries like Oman, Bhutan and Mongolia.”

‘We had countries here with sophisticated development systems, nations like Australia, India and South Korea. But we also had others who don’t have anything like that. For me, the biggest value in this event is seen in that second group, more than the guys who have gone on and won.’ —Martin Slumbers, R&A CEO

Elsewhere, definite progress is being made on the playing side. The starting line-up at Dubai Creek contained 93 players from 29 countries. The halfway cut, which fell at a creditable two over par, knocked the number of competitors down to 50. And within them, 15 nations were represented. The usual suspects like Australia, China, Japan and South Korea were still around, as one might expect, but so were Jordan, the United Arab Emirates, Indonesia and the Philippines.

“Any time you get on a plane to go to the AAC is special. It is just such an unbelievable opportunity,” says Leon D’Souza from Hong Kong who finished T-31 on one under par. “This is an unbelievable event, one that helps so many players at so many levels. It is always played on a great course. And outside of the event, what Augusta National and the R&A are doing to grow golf in Asia is amazing. The game is growing in places where it was almost unheard of, say, a decade ago, which is hugely important. I love to look around at this event and see guys who will only ever play in amateur events. For them, this must be such a special tournament and a great week, one that might just change their lives. This is one of the best weeks in amateur golf anywhere.”

That’s message was echoed several times last week. It was impossible to find a player who wasn’t grateful for the chance to play and appreciative of the event’s back-story. Ahmed Skaik from the host UAE was typical.

“It’s pretty inspirational to be playing in the same event Hideki won,” says Skaik, who hit the opening tee shot in Wednesday’s first round. “Now he is Masters champion. It just shows how, if you play big events and keep practicing, how far you can get in the game.”

Slumbers noted that the 2021 tournament was bound for Royal Melbourne but COVID prevented the Australian course from host, with Dubai stepping in to help. The venue change, however, proved inspirational in other ways.

Charles Laberge
The hope is that Nakajima’s win in 2021 can impact future generations of Asian players to follow his path, just as past AAC champ Hideki Matsuyama did for Nakajima.

“We are going to see the platforms develop here at a rapid rate,” Slumbers continues. “For the next generation of players. I’ve had conversations here. They want our help in making golf more than tourism and the European Tour. How can we make it a sport for a wider cross-section of the population. I’m delighted to help with something I’m not sure we would have done quite so readily pre-COVID. Our focus was maybe elsewhere.”

‘It’s pretty inspirational to be playing in the same event Hideki won. … It just shows how, if you play big events and keep practicing, how far you can get in the game.’ —Ahmed Skaik, AAC participant from the U.A.E. 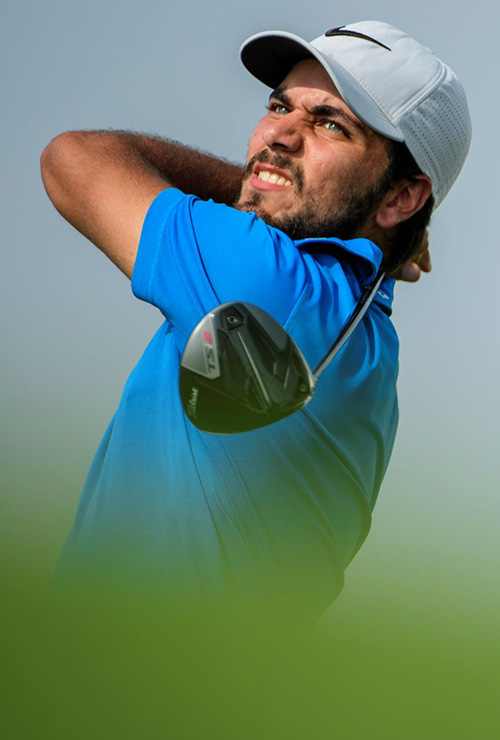 Speaking of which, the third Women’s Amateur Asia-Pacific Championship takes place this week at the Abu Dhabi Golf Club. First played in 2018, the event (in retrospect) got off to something off a flying start. The inaugural winner was Atthaya Thitikul, who topped the Order of Merit on the Ladies European Tour this year, the Thai emerging from a five-way playoff that also included the current U.S. Women’s Open champion Yuka Saso and ANA Inspiration winner, Patty Tavatanakit.

“Women’s golf has always been strong in Asia, but there is another wave of great players on the way,” Slumbers says. “This week will be interesting. The winner gets into the AIG Women’s Open, the Evian Masters and the ANA Inspiration. We have pretty much covered the globe with our event and the Latin America championships. It’s pure, proper golf. Business pays for it, but it is proper golf.”

On and off the course, he could easily have added.