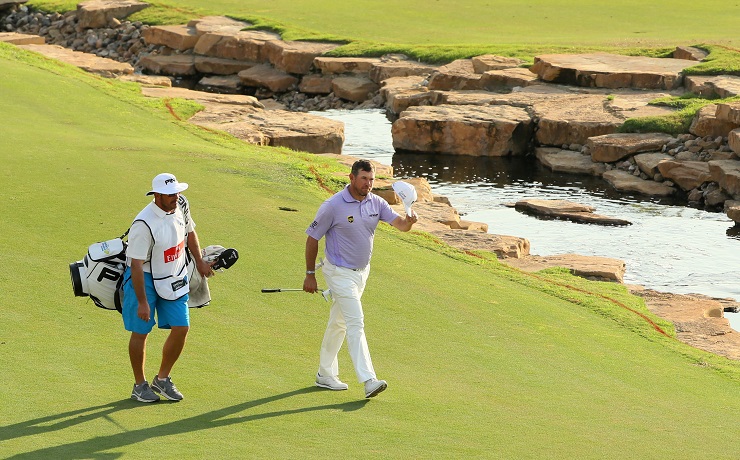 Lee Westwood has had to hastily source a new caddy for the Race to Dubai decider but might have found something even more important – a swing thought or two that could help the former world No.1 repeat his 2009 DP World Tour Championship triumph.

Still, the 43-year-old Englishman will need to re-write history if he is to is to kick-on from his fine opening 66 around Earth on Thursday and join Rory McIlroy (2012 and 2015 ) and Henrik Stenson (2013 and 2014) as a two-time champion at Jumeirah Golf Estates (JGE).

No winner has ever gone wire-to-wire on Earth but Westwood’s seven birdies and eventual signature on a six-under round hints at a serious 2016 title tilt from the inaugural Race to Dubai champion.

“This is as good as I’ve played for quite some time,” said Westwood whose 66 matched his opening round in 2009 when he went on to win by six but remains two strokes shy of the best Thursday score at the DP World Championship, a sizzling 64 carded by Swede Peter Hanson  in 2011.

“I’ve found a couple of keys in different parts of my game and I’ve been working in them hard. It all came together today. 66 is a good round of golf… [it] didn’t seem that easy out there.”

Care to elaborate on the little triggers you’ve found in the last week or so Lee, the tweaks that have you in pole position for a $1.3 million pay day?

“Not really,” said Westwood who went 0-3 in Europe’s 11-17 Ryder Cup reverse at Hazeltine National in October and has enjoyed just one top 10 on each side of the Atlantic Ocean in 2016, a runner-up finish to Danny Willett at the US Masters and third at the British Masters.

“I don’t particularly want to go into it. I’ve been working with a few different people and I’ve been getting clear ideas of what I need to do and I’m doing those and working on them.”

Westwood is also having to work doubly hard at JGE with regular bagman Billy Foster icing his dodgy knees back in England. Foster will be back after treatment for the HSBC Abu Dhabi Golf Championship in late January but for now Westwood is learning to trust Ken Herring, normally the bag man for Scotsman Marc Warren.

“Yeah, I probably have to do more, think a little bit more. Billy normally thinks for me which is probably a good thing,” said Westwood who tees it up at 12.50pm (UAE time) Friday with Frenchman Julien Quesne who was a shot back in a share of second place overnight alongside big hitting Belgian Nicolas Colsaerts.

“Obviously a different caddy doesn’t know my game. He’s only had one round on the bag and that was in the Pro-Am on Tuesday and I wasn’t particularly sharp then.

“He’s sort of making it up as he goes along. I have full confidence in him and his yardages and the way he reads the wind and stuff like that. [I just] put my game to his information.”

Herring will be keen to keep the chemistry going for the next 54 holes but not as much as Westwood who hasn’t won on the European Tour since the 2014 Malaysian Open and has to go back to April last year for his last title, the Indonesian Masters. – Kent Gray