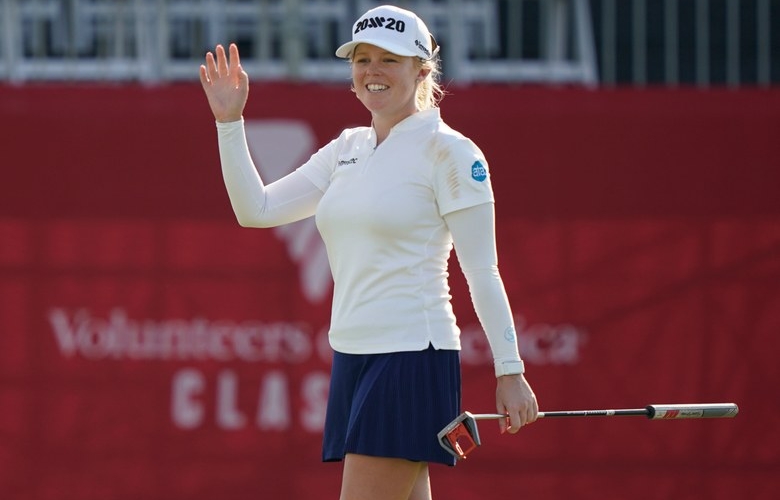 By Ryan Herrington
A standout college career at the University of Alabama and a third-place finish at the 2014 U.S. Women’s Open in her professional debut left Stephanie Meadow with understandably big expectations as she began her LPGA career. But the 27-year-old from Northern Ireland has struggled since her fast start at Pinehurst.

Meadow finished 131st on the LPGA money list in 2015, distracted off the course by the passing of her father and golf mentor, Robert, from pancreatic cancer. It was more of the same in 2016 and 2017, when Meadow finished 115th and 153rd, respectively, as she dealt with back issues that kept her from playing consistent, pain-free golf. She competed on the Symetra Tour in 2018, finishing sixth on the money list to return to the LPGA. Her fortunes on the LPGA Tour in 2019, however, have continued to be mixed, as she had missed 10 cuts in 20 starts and sat in 112th place on the money list entering this week’s Volunteers of America Classic.

As the last full-field event of the 2019 season, Meadow had to find a way to earn enough at the Old American Golf Club outside Dallas to move inside the top 100 on the money list to retain her card for 2020.

Meadow was on track after an opening-round 63 staked her to an early lead and topped her career-best score by three strokes. Rounds of 71-73 kept her on the leader board, knowing she needed an eighth-place finish or better to win enough cash to keep her card.

Playing the first 16 holes on Sunday in two under par, Meadow looked like she’d need two more birdies to accomplish her goal. Painfully, she left a 12-footer for eagle on the 17th three inches short, but at least got her first birdie.

On the 18th hole, Meadow hit her approach to 25 feet for a must-make putt:

Fighting to make Top 100 on the money list, @StephMeadow20 finishes birdie-birdie in Texas.

Watch the conclusion of the @VOAClassic now on @GolfChannel! pic.twitter.com/VfVUqY7ltQ

Suffice it to say, she didn’t leave this one short. That capped a Sunday 67 and a T-6 finish, which moved her into the 99th spot on the money list at the end of the tournament.

Meadow gives Doug Ghim a run for his money for the coolest reaction to a made putt that secures a tour card after Ghim holed this putt in the Korn Ferry Tour Finals to earn a PGA Tour card.