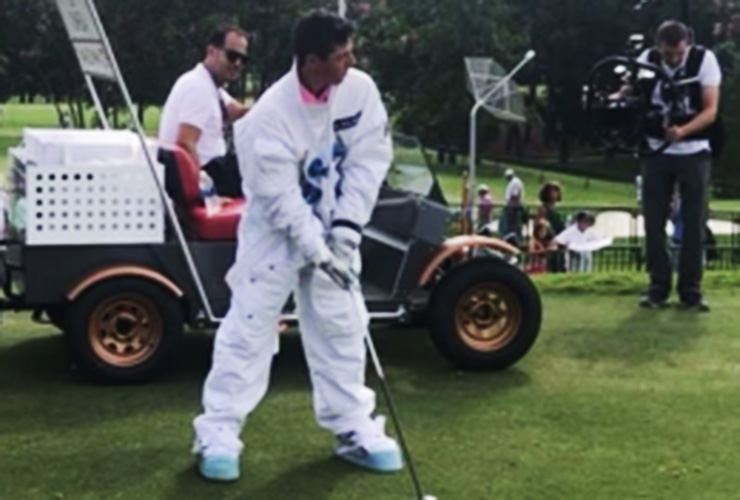 Rory McIlroy averaged a whopping 328.7 yards off the tee at the WGC-Bridgestone Invitational, leading the field by nearly 10 yards and hitting all but four of his tee shots for the week over 300 yards. You might even go as far to say McIlroy’s driving at Firestone was out of this world. But on Monday, that phrase was even more appropriate.

Appearing at a pre-PGA Championship event for Omega at Quail Hollow, McIlroy ripped tee shots while wearing a space suit. And judging by the sound of this shot — and McIlroy’s caption — it seems the four-time major champ still had no problem launching a golf ball past the 300-yard mark. Check it out:

“Houston, we have a problem” #DriverStillGoesOver300 @omega

The most impressive part of the clip is McIlroy saying he was switching to a baseball grip to deal with the restrictions of the space suit. Of course, if we wanted to nitpick, we’d point out that McIlroy wasn’t wearing a space helmet.

Either way, it was a cool stunt and a good way to associate Omega with the PGA Championship in some manner other than that awful “Hall of Fame” commercial that seems to run on a loop during the tournament. Whoops, is that song in your head now? Sorry. . .

RELATED: The PGA Championship is moving to May