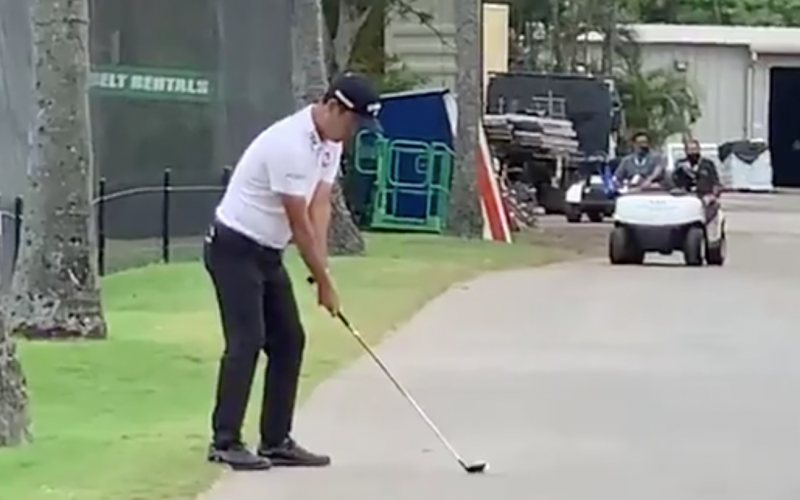 By Ryan Herrington
Kevin Na hit only seven of 14 fairways on Saturday en route to shooting a third-round 61 at the Sony Open in Hawaii that left him two strokes back of leader Brendan Steele with 18 holes remaining. Presumably, then, he’s not one to worry about failing to find the short grass off the tee, a trait that came in handy on the opening hole Sunday at Waialae.

Teeing it up with Steele and Joaquin Niemann in the last group off the first hole, a tricky 491-yard par 4, Na pulled his opening drive well left of the fairway, the ball eventually coming to rest on a cart path that runs down the hole.

Given where the ball ended up, Na could have taken relief left of the path. Yet presumably that would have left him with a more precarious shot then he had if he just played it off the path. We say presumably because Na elected to play the ball as it lied, taking out a fairway wood and doing this.

Kevin Na from the cart path. 💪

He takes a fairway metal off the concrete to save par. He’s just one shot back. pic.twitter.com/qCrwZFWmcm

Just how much swagger does Na possess? Well, look at him walking the shot in second after hitting it just like he does with his putts on the green.

What the video doesn’t show is the fact that Na hit the ball 211 yards off the deck on the concrete. It wasn’t far enough to reach the green, but it was safely in a front bunker where Na was able to safe get up and down to save par. On the next hole, he made a birdie to cut Steele’s lead to one. Before the day was over, Na would make four birdies over his final six holes to shoot a 65 and win the tournament, his fifth career PGA Tour title.

What the video did show is the fact that tour pros are NOT just like us, that they can play shots ordinary golfers wouldn’t dream of.