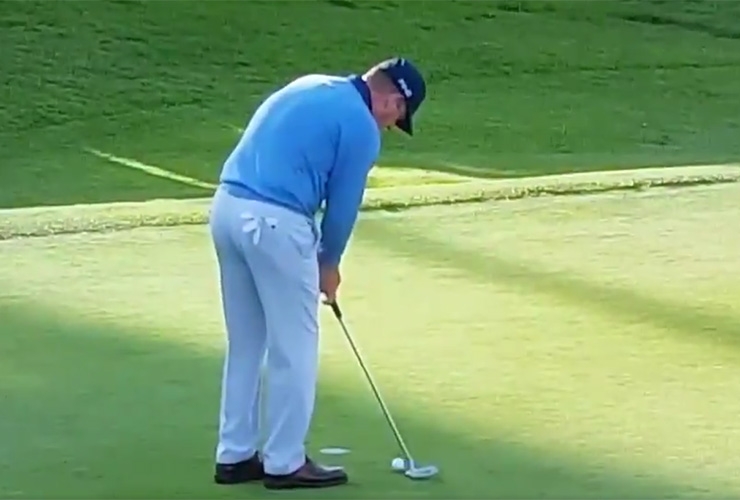 By Christopher Powers
The opening round of the Hoag Classic was a stagnant one for Jeff Maggert, who sat at two-over par through 17 holes. A couple of birdies, couple of bogeys, and very little momentum to speak of. But the short par-5 18th at Newport Beach Country Club presented an opportunity to get one, maybe even two back before heading into the weekend. Worst case, Maggert would settle for par and call it a day … or so he thought.

Maggert, a three-time PGA Tour winner who held the solo 54-hole lead at the 2003 Masters, reached the 18th green in regulation and had less than 10 feet left for his birdie. Would you believe it if we told you he walked off with a triple-bogey 8? Warning — graphic content below:

File this one under things you just hate to see, but not in a sarcastic way like the kids say. You actually really do hate to see that, especially if you’ve ever dipped your toe into a real competitive round before. Suddenly, those five-footers that are “good” on the weekend become the toughest putts in your round, and if you’re not used to them you can find yourself in a similar, nightmarish situation as Maggert’s. One short miss becomes two, two becomes three and the next thing you know you’re in the five-putt club.

Credit to Maggert for remaining calm, though you can tell he’s simmering on the inside. He gave his entire group the quick handshake as he made a b-line for the locker room, and we can’t blame him. Not everybody can just laugh it off like Ernie Els

Maggert finished with a five-over 76, dropping him into a tie for 66th.