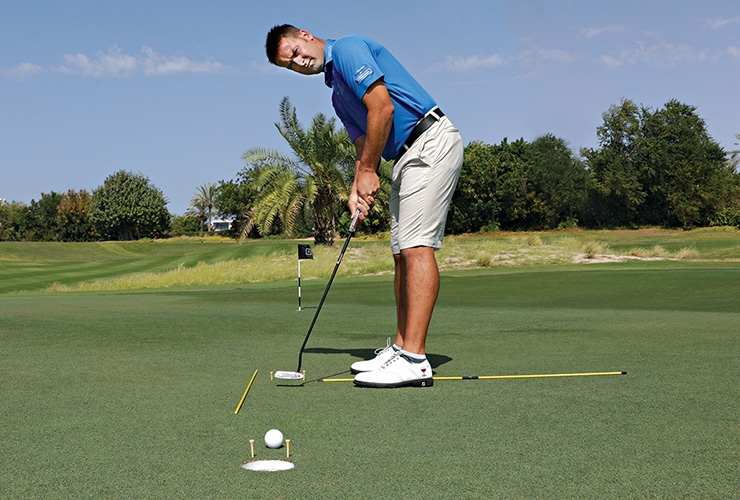 That 300-yard drive is satisfying but counts the same as a three-footer and we bet you find missing a short putt a whole lot more frustrating than just missing a fairway? If so, watch this video to starting holing more putts today.

By Brendan O’Leary
Go on, admit it. You’re desperate to score well but instead of practising the “scoring shots”, you rush to the range and immediately reach for the driver? Who doesn’t love nailing the big stick, right? Sure, but it’s the wrong way to lower scores when you consider stats show that the average amateur will use the driver 13 to 14 times a round – and their putter somewhere between 35 and 40 times. So, let’s head to the practice green and start focusing on one of the most overlooked parts of the game.

The key to becoming a good putter is nailing the basics right from the start of your setup. By sorting your posture, alignment and ball position you’ll give yourself the best chance of achieving a consistent strike.

A lot of players will stand in a taller posture with flat shoulders, causing the putter to travel on a severe arc which ultimately leads to inconsistency at impact due to a lot of toe and heel strikes. In addition, poor putters often don’t get their eye-line directly above the ball at address (see picture 4 in the set-up sequence above right for the correct reference) which is a recipe for consistent miss reads. Follow the techniques illustrated here and you’ll be on your way to sinking more putts and lowering your handicap. Remember, that 300-yard drive has the same value as a three-foot putt but just missing the fairway isn’t half as frustrating as just missing a short putt. – With Kent Gray.

Brendan O’Leary is a PGA Teaching Professional at The Academy by Troon at The Address Montgomerie Dubai. For help with your game, email [email protected], call +971 4 363 1209 or visit www.themontgomerie.com

More distance from the tee starts from the ground up