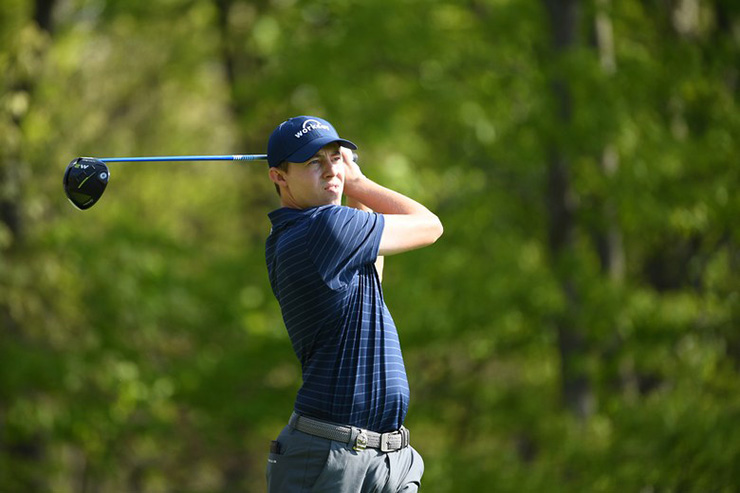 By John Huggan
You won’t find his name or picture under “old-time U.S. Open golfer” in any search engine, but it is a description that hints strongly at Matt Fitzpatrick’s style of play. The 24-year old Englishman hits a lot of fairways, almost as many greens and strength of his game —although not so much so far this year—is his putting. Pebble Beach as it is set up for this week’s U.S. Open? On paper at least, “made” for the former U.S. Amateur champion.

“Matt’s game is so solid,” says Fitzpatrick’s compatriot, Lee Westwood. “His bad shot is rarely that bad so he is best suited to courses where hitting the fairway is a must. Tight and not overly long — where there are a lot of wedges to be hit — are the types of places where he shines.”

Also working in Fitzpatrick’s favour is how predisposed he is to what might be called a traditional U.S. Open course setup. That view puts the former U.S. Amateur champion firmly in the minority if recent comments from so many high-profile members of the professional golf community are anything to go by, but he is unrepentant.

“I actually like U.S. Open setups,” he says with a smile. “It’s tough. The fairways are narrow. The greens are firm. And if you miss, you are going to be in the rough. Which is thick. That’s all fine by me. What’s the aim of the game? You aim to hit the fairway, then you aim to hit the green. Then you try to hole the putt.

“All of that is in complete contrast to what we saw at the PGA Championship last month. They got it so wrong. It was just ‘bomb and gouge’ — hit it as far as you can off the tee. If you hit the fairway, great. But if not, it is still only a wedge to the green. That’s what Brooks Koepka and Dustin Johnson did all week. I’m not saying they are not great players — that would be silly — but there has to be more to the game than that.

Fitzpatrick is first to admit that his preferences — and moans — have as much to do with his own way of navigating around courses as they do with any “big picture” concerns for the state of professional golf in the 21st century. Growing up in Yorkshire at the Hallamshire club in Sheffield, the importance of straight-hitting was drummed into him much more than any need for speed.

“Nowadays it is all about how far you hit the ball,” he says. “Being longer off the tee should provide an advantage but it is disproportionate. I read this recently about the PGA Tour. If you average over 118 mph swing speed, you earn something like $500,000 more than the guy who can’t move the club that fast. That’s ridiculous. There has to be more to the game than that. Brooks is a brilliant player, but I wouldn’t want the game to reach the stage where his way is the only way to play and be successful.”

Fitzpatrick is far from alone in that view and he can cite at least one powerful ally. While playing alongside Tiger Woods in the Players Championship earlier this year, his caddie, Billy Foster, peppered the soon-to-be 15-time major champion with questions. One centred on the distance debate.

“Tiger was saying, ‘why would I ever use cavity-back irons and hit a 9-iron 200-yards when I can use blades and be more consistent?’” says Fitzpatrick. “That hit the nail on the head for me.”

All of which is a roundabout way of saying Fitzpatrick might just be worth a sneaky each-way wager in what will be his fifth U.S. Open. Leading amateur in his debut back in 2014, he has seen steady improvement in three appearances as a professional. Last year at Shinnecock Hills he was a creditable 12th.

Ah yes, Shinnecock. Unlike so many of his peers, Fitzpatrick found no fault with the USGA’s controversial presentation of the famous Long Island links. Their comments were definitely not his cup of Earl Grey.

“It is a bit unprofessional for players to speak in those terms,” he says. “It was a bit childish really, toys out of the pram stuff. I am biased, but I think the USGA does a good job running its events. The U.S. Open is supposed to be hard. And it is hard. Because it is set up to be the toughest test.

“Last year I heard players saying the USGA had ‘lost’ the course. They hadn’t, though. It was just really tough, especially by the end of the third day. Isn’t that why we have practice rounds? That’s when we work out how to play each hole — ‘when the flag is here, don’t hit it over there.’ So to do that, then go out and complain that the course is too hard or too bouncy is just stupid. People saying those things have probably just performed poorly. ‘Play better,’ would be my message.”

As for this year, Fitzpatrick has nothing but good things to say about Pebble Beach and, weather permitting, can’t see the USGA copping any of the flak that has scarred so many National Opens over the last two decades or so. And he sees no reason why someone ranked 159th in driving distance – but 45th in driving accuracy – on the PGA Tour cannot find a way into contention on a course measuring “only” 7,075-yards. Even in a world where the odds are stacked so steeply against him, this is a week with big possibilities.

“I think someone like me can win here,” he claims. “Graeme McDowell showed that in 2010. Which is good in a game where a player like me would have to play almost perfectly for a year to be world number one (a position Fitzpatrick fieldrf as an amateur). I’d have to hit a lot of great approach shots and make almost every putt over a sustained period. So yes, I could conceivably get there. But I’d have a hard time staying there. The guy who hits it 330 yards through the air has way more chance than me.”