Tiger Then VS Now 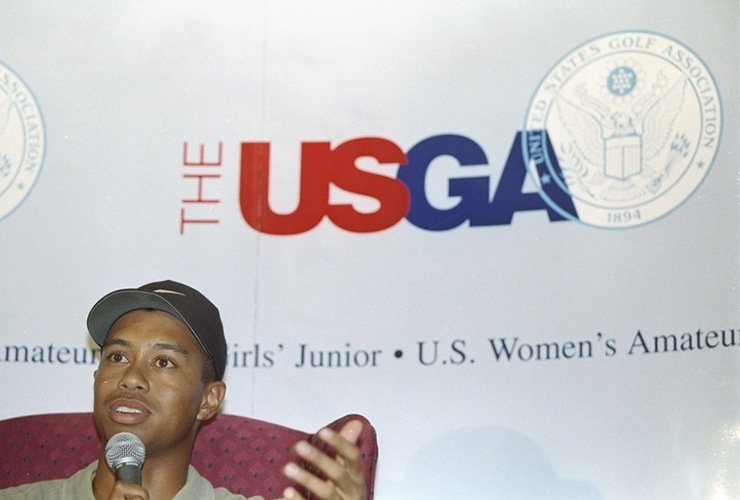 By Sam Weinman
We could list all the substantial ways Tiger Woods has changed in the 19 years since he won the U.S. Open at Pebble Beach: broader shoulders, less hair, a few additional cubic centimetres to the head of his driver. The list goes on. But another way to look at the way Woods has changed since that landmark win nearly two decades ago is by way of words.

On Tuesday, Woods spoke to the media, just as he did on the Tuesday prior to his 15-stroke win at Pebble Beach in 2000. Broadly, the two sessions were constructed the same: a golfer, a moderator, a room full of writers and broadcasters posing questions by way of a shared microphone, with one query having little to do with the next.

Understandably two days before the start of the national Open, Woods this year faced an array of questions similar to the ones he faced then. Of course, Woods was asked about the state of the game. In 2000, before embarking on the greatest stretch of golf in the game’s history, Woods hinted at his confidence by saying he was “heading in the right direction.”

On Tuesday, two months after his comeback win at the Masters but coming off a missed cut in the PGA, Woods said, “I feel like I’m trending in the right direction.”

On a few occasions, Woods’ memory proved imprecise. In 2000, he was asked about his first time playing Pebble Beach and suggested it was while in middle school. “When I first played on it —I played on it when I was 13— I just remember coming out here and finding the golf course so long,” he said in 2000.

On Tuesday, Woods remembered the same challenge but coming at an earlier age. “I must have been 9 or 10,” he said. “It was a long, soft, wet golf course to me.”

Certain questions underscored altered circumstances. For instance, in 2000, Woods was asked about Steve Williams, who at that point was a little more than a year into a highly-successful tenure on Woods’ bag. “Stevie obviously has been a tremendous help for me. He’s very upbeat, very positive,” Woods said then. “He’s won everywhere. And I think that’s because of his attitude. He’s always prepared, and I think that has rubbed off on me, being so upbeat and positive.”

Asked on Tuesday about Williams, who split with Woods in 2011 and is debuting on Jason Day’s bag this week, one could detect a more detached response. “Stevie has been around for a very long time, well before my career,” Woods said. “And obviously we won a bunch of tournaments together. He’s got a wealth of knowledge.”

Another benchmark question pertained to Woods’ pursuit of Jack Nicklaus’ record of 18 majors. It was a seemingly vague concept back in 2000 when he was 24, with a modest two major titles to his credit. “I’ve had a pretty good run lately, and hopefully, I’ll continue to play well, and chalk up some more majors, as well,” he said.

His responses on Tuesday spoke as much to the remarkable career he’s compiled, as well as the obstacles that have briefly derailed it. At one point, Woods presented a simple mathematical response. He’s won 15 majors by age 43. If he can stay healthy over the next decade, he’ll have a chance to win more.

More telling, though, was when Woods was asked the value he now placed on Nicklaus’ record. When he was 24, Woods couldn’t have anticipated everything that was still to come—13 more majors, sure, but also scandal, injury, and the shifting priorities of fatherhood. To hear Woods now is to hear a golfer on the brink of history, but less willing to define himself so narrowly.

“What’s important to me is that I’m back playing again. This game was taken away from me for a few years there. And I miss competing, I miss playing. Now I have an opportunity to do that again, and also to be able to share it with my kids,” he said.