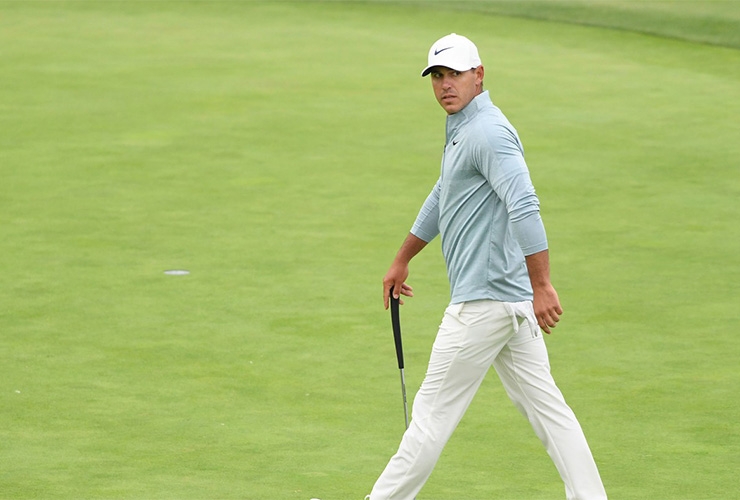 By Brian Wacker
Brooks Koepka is human after all. We think.

“He’s like a cockroach,” Xander Schauffele said. “He just won’t go away.”

Koepka did not win on Sunday at Pebble Beach to join Willie Anderson as the only other player ever to claim three straight U.S. Open titles.

So what? He doesn’t know much about Anderson, or Google, anyway. And he doesn’t even like golf, remember?

Koepka, who finished second three strokes behind winner Gary Woodland, is the best player in the world and that much he does know. He just wasn’t the best for four days along the Monterey Peninsula, though he was close.

The 29-year-old four-time major winner did, however, become the only player in the 119 editions of the championship to shoot four rounds in the 60s and not win. Koepka was also the first player to record five straight rounds in the 60s at a U.S. Open, dating back to last year’s triumph at Shinnecock Hills, in case he needs an extra chip for his shoulders.

“It doesn’t sting,” he said after a final-round 68. “I played great. Nothing I could do. I gave it my all. I give it my all every time and sometimes, like this week—it happened at Augusta—it’s not meant to be. I hit every shot that I wanted to. And sometimes no matter how good your good is, it isn’t there.”

In the last four majors, Koepka has now finished first, second, first, second. Had he not rinsed his tee shot on the par-3 12th at Augusta National earlier this year, we might still be wondering when (or if) Tiger Woods was going to win his 15th major.

Speaking of Woods, those results by Koepka sound a lot like someone else’s. While it’s a futile—and foolish—exercise to compare anyone in the current game to Tiger, Koepka is the closest thing to him, both physically with the athleticism he brings to his trade and more importantly mentally—the separator between the great and the all-time. 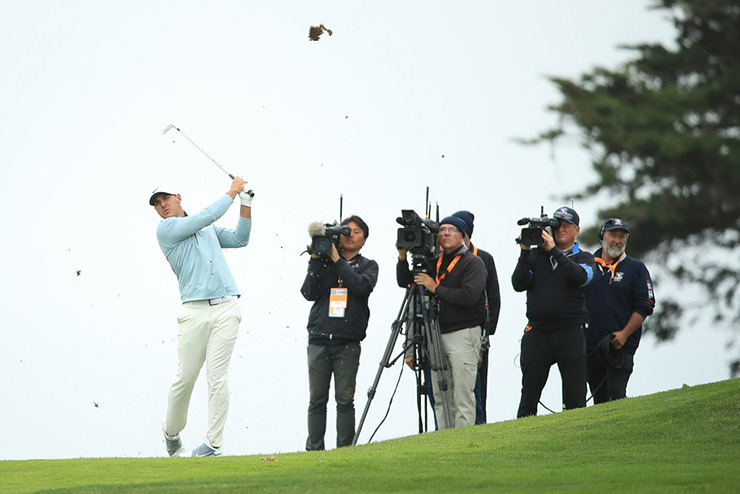 Koepka plays his approach shot on the ninth hole during the final round on Sunday. (Andrew Redington/Getty Images)

Is there any question that Koepka will go down as the latter? As someone once said of Woods, only a bad marriage or a bad back can stop him.

“They are more similar than anybody is talking about,” said sports psychologist Gio Valiante of Koepka and Woods. “It goes very deep. It even shows up in their patterns of speech and use of language, their pauses, their beliefs. In a psychological sense, if not performance, of him alone he’s the most Tiger Woods we’ve ever seen.”

When it comes to comparisons, here is another one: Woods won his fourth career major in his 15th major as a professional. It took Koepka 22 to total that many. Not bad. And since he won his first at the 2017 U.S. Open at Erin Hills, Koepka has finished outside the top 10 in majors just twice, with a tie for 13th at the 2017 PGA at Quail Hollow and a tie for 39th at last year’s Open at Carnoustie.

“Brooks, he’s unbelievable,” Woodland said of Koepka. “He lives for this moment.”

Only this time the moment belonged to someone else for a change. Don’t get used to it.

“Nothing I could do,” Koepka said. “Gary played a great four days.”

Before this week, Woodland, a three-time PGA Tour winner, had just two top-10s in 30 career majors and was a fat 0-for-7 in his career when leading after 54 holes.

And in some ways, it was like Koepka was playing against a Costco version of himself, both physically and stylistically. Like Koepka, Woodland was an athlete of another sport in a former life, a Division II basketball standout at Washburn University before he transferred to Kansas to focus full time on golf. Once on tour, he was viewed mostly as a one-dimensional player known for his power. But he revamped his practice habits under coach Pete Cowen (who also works with Koepka) and improved his putting under Phil Kenyon—two skills that have also served Koepka well during his run.

Woodland even exhibited the sort of mental toughness that has become a hallmark of Koepka’s game, not flinching when Koepka opened with four birdies in his first five holes on Sunday to cut a four-stroke deficit at the start of the day in half and responding with two birdies of his own on the second and third.

Still, Koepka persisted. Even when a few loose swings crept in during the middle of his round, he seemed unfazed and bounced back with a birdie at the 11th to trim the margin to a single stroke.

“Part of his mental makeup is that he doesn’t try too hard because baseball was his dream,” Valiante said. “Golf was his concession. Like going on a date to the prom with your backup girl.”

This time it was Koepka who got left behind. A bogey followed on the 12th and he failed to post a red number the rest of the way.

“On 18, I realized I was that close to accomplishing something that has not been done in 100-plus years,” Koepka said. “That’s special. But I don’t think anybody in the world played as good as Gary did.”

That was never more evident than with Woodland’s 3-wood approach over a bunker on the par-5 14th that narrowly cleared the sand and trickled just off the green. It was a shot that will go down in Pebble Beach lore alongside Nicklaus’ 1-iron on 17. Then there was his wedge from on the green at 17. It didn’t go in like Tom Watson’s chip but it didn’t have to. It was a gutsy decision and the execution of the shot even better.

“You knew Brooks was going to make a run,” Woodland said of Koepka’s attempt to chase him down. “I just tried to stay within myself.”

Hope he enjoys it. Because Brooks will be back. The Open Championship is only a month away.