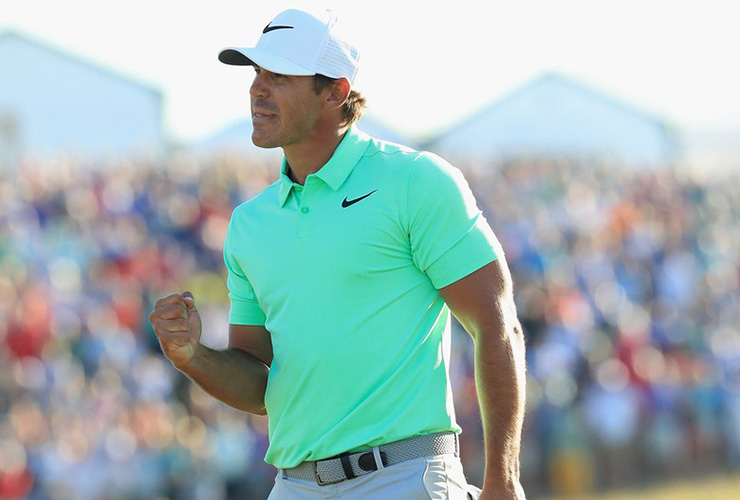 Brooks Koepka reacts after finishing on the 18th green and winning the 2017 U.S. Open title. (Photo by Andrew Redington/Getty Images)

There hasn’t been a repeat winner in the U.S. Open in nearly 30 years, since Curtis Strange in 1989, but it sure looked like the same guy won the championship for a second year in a row.

Brooks Koepka, a golfing pugilist in the mold of 2016 champion Dustin Johnson and with the same high expectations—and low blood pressure—captured the 117th U.S. Open Sunday at Erin Hills with a combination of power and timely putting for his first major title. Koepka blasted his way to a five-under-par 67 on a breezy day on the linksy first-time U.S. Open site to win by four strokes over third-round leader Brian Harman and Japan’s Hideki Matsuyama.

Navigating tricky conditions with pure ball-striking, Koepka pulled away from a battle with Harman to complete 72 holes in 16-under 272, tying the championship scoring record in relation to par that Rory McIlroy set in 2011 at Congressional Country Club.

Harman began the day one stroke ahead of Koepka, England’s Tommy Fleetwood and Justin Thomas—who set the scoring record in relation to par Saturday with a nine-under 63—but endured an uneven round of 72 to share runner-up honors at 12 under with Matsuyama, whose inward 32 yielded a 66.

Koepka, who has the same swing coach as Johnson, Claude Harmon III, and who often works out with DJ in Jupiter, Fla., used the term “chill” to describe his mood all week in the biggest ball park in U.S. Open history. “I felt like I was playing some of the best golf I’ve ever played,” said the Florida native, who had just one bogey (a three-putt) and hit 12 fairways and 17 greens in regulation the final day. “All around, my game was pretty solid, and if you can go around here without making a double bogey, then you’re doing all right.”

Ranked 22nd in the world entering the week, Koepka, 27, emerged from a leader board that was crowded with contenders who never had won a major title. He became the eighth champion in the past 11 years to make the U.S. Open his first major victory. It was just his fourth professional title and second in America, but it yielded the biggest first prize in golf history, $2.16 million.

Tommy Fleetwood, also shooting 72, ended up fourth at 277, while first-round sensation Xander Schauffele, a PGA Tour rookie playing in his first major, closed with a 69 to share fifth place at 278 with Bill Haas, who also had 69, and Rickie Fowler, the first-round leader, who settled for 72. Thomas, meanwhile bogeyed three of his first five holes and made only one birdie in a 75 to fall to T-9. He had made nine birdies and an eagle the day before.

“I just didn’t have it today,” said Thomas, who is part of the Jupiter crowd that plays together, a group that includes Koepka, Johnson and Fowler. “But it made me feel a lot better seeing Brooks shoot five under. I would have had to play some pretty spectacular golf to catch him.”

Koepka and Harman were tied through 11 holes until the left-hander suffered consecutive bogeys. Then Koepka pulled away with a brilliant stretch of putting that started when he saved par at the 13th with a nine-footer. “I built on that putt on 13,” he said.

A five-footer at the par-5 14th after Koepka reached a greenside bunker in two on the 588-yard hole started a run of three birdies in a row that essentially clinched it. He followed with a 10-footer at 15 after a “chipped” 8-iron from 155 yards and then nailed a 17-footer at 16 to tie McIlroy at 16 under. And Koepka had the reachable par-5 18th in front of him.

Koepka, evokes much of the same detached demeanor as Johnson, and on the 72nd hole, he exhibited the same kind of power and self-assurance as that Dustin did a year ago at Oakmont. With a 3-wood in hand, Koepka nuked a 379-yard drive down the middle on the finisher that was set up to play 681 yards on Sunday. His second came up just short of the green, however, and his ball rolled down the front slope into an awkward lie next to a bunker. He almost muffed the third, leaving it 41 feet away, but calmly two-putted for the title.

Heck, his fist pump after the final putt dropped, strong but restrained, even conjured memories of Johnson at Oakmont. 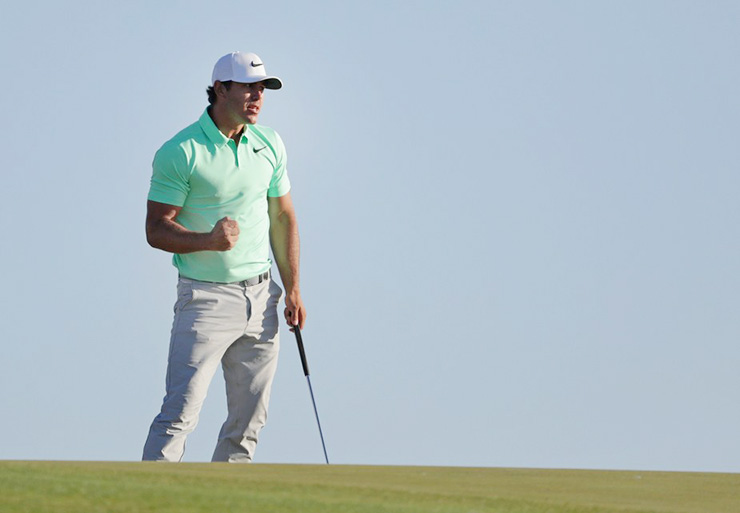 Coincidentally, Koepka credited Johnson, who missed the cut, with helping him—albeit in absentia—on the closing stretch. Johnson had called him on Saturday night, and Koepka thought back to their brief conversation. “It was a long phone call. For us, it was like two minutes,” Koepka joked, as the pressure started to build.

“That meant a lot,” Koepka said. “He just told me to keep doing what I’m doing, stick to my game plan, not get ahead of myself. I thought about that phone call on 14 today. I tried not to get ahead of myself and stay in the moment. And it worked.”

“I played with him at the Memorial two weeks ago. He’s just really impressive physically. Just pounds the ball,” Haas said, warming up to make the comparison to DJ. “He’s got a lot of Dustin Johnson in him—just long and straight. And he’s going to overpower golf courses, and he’s got a great demeanor. He’s just like Dustin, I would say. They’re very much a similar player, where nothing seems to bother them. And it’s no surprise. You watch him hit, it’s a little different than most of us out here.”

There’s certainly something different about him now. Koepka is the seventh first-time major winner in a row, a run that started with Jason Day at the 2015 PGA Championship.

After signing his scorecard, Koepka was seen holding his head in his hands, overcome with emotion, as he rode in a golf cart to a televised interview on FOX and the presentation of the U.S. Open trophy and the Jack Nicklaus gold medal, before the traditional 18th-hole ceremony.

He was finding it difficult to grasp what he had accomplished.

“What I’ve done this week is amazing,” Koepka said when he read some of the names on the trophy. “To have my name associated with players like that … this is truly special.”

More than anything, it was special because he felt like he had been an underachiever, that he wasn’t a closer, that he only had a single PGA Tour win, the 2015 Waste Management Phoenix Open. A one-time baseball prodigy, he was striking out.

“I just felt like I should be winning more,” he said, explaining frustrations that he now has exorcised, at least for the time being. “I don’t know why. It’s one of those things, not a big fan of losing; I don’t think anyone out here is. And I just couldn’t stand the fact that I’d only won once.”

Well, he certainly took care of that.