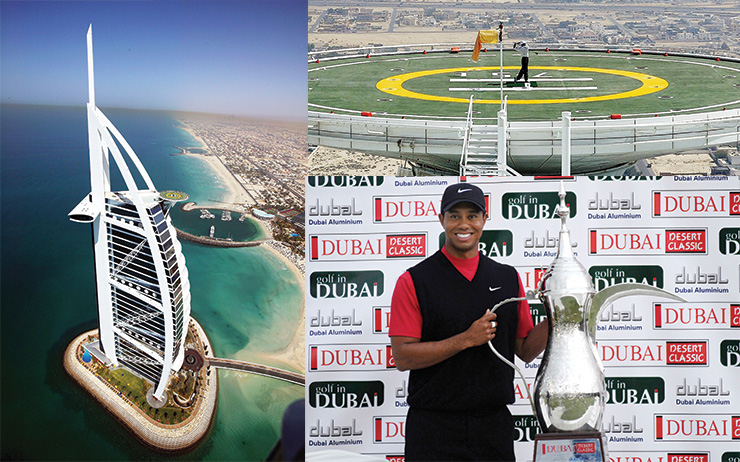 Dubai, UAE (January 5, 2017) — From a sensational debut to his starring appearance in the 25th anniversary birthday bash in 2014, Tiger Woods has added great drama to the Omega Dubai Desert Classic. We push rewind on the former world No.1’s countless moments of Majlis magic ahead of his eighth appearance at Emirates Golf Club from February 2-5.

2001 – Duel in the Desert
T2 (64-64-68-72)
Woods shoots 64 in the Pro-Am and promptly matches the eight under round twice more to set what remains today as the lowest 36-hole total of 128. Played with eventual champion Thomas Bjorn all four rounds in what become known as the ‘Duel in the Desert’, eventually finishing two shots adrift of the Great Dane in a tie for second with Padraig Harrington on -20.

2004 – Burj Al Arab
T5 (70-69-69-68)
Mentor and mate Mark O’Meara, who first introduced Woods to the charms of the Desert Classic, wins at -17, his first title since capturing the 1998 Open Championship at Royal Birkdale. Woods finished tied fifth, five shots back, but made his biggest impact by hitting balls off the helipad at the iconic Burj Al Arab, a promotional stunt that ensured the ‘Major of the Middle East’ reached a truly global audience for the first time. 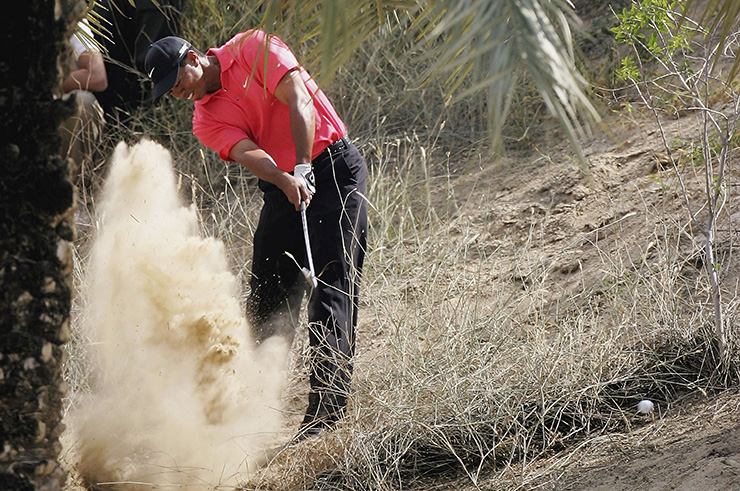 2006 – Third time lucky
CHAMPION (67-66-67-69)
Ernie Els had secured an unprecedented third title the previous year and wasn’t about to give up the famed silver coffee pot easily. Woods took the lead, alongside Dane Anders Hansen, after 54 holes with Els two back. Tiger drove it all over the Majlis in the final round but his powers of recovery – “shades of Severiano Ballesteros” as Rodney J. Bogg wrote in his book, The Desert Miracle – kept him in it. Two back on the 17th tee, Woods’ drove the par 4 for a two-putt birdie and then birdied 18 to force just the fourth of five Desert Classic playoffs. Els drove it into the sand in extra time en-route to a bogey, allowing Woods to win at the third time of asking with a regulation par.

2007 – Stout defence
T3 (68-67-67-69)
Woods produced four sub 70 rounds in a credible defence of his title and was part of an exciting five-player battle on the final day including eventual winner Henrik Stenson, Els, Niclas Fasth and Ross Fisher. Woods finished -17, two behind Stenson.

2008 – Mesmerising final round
CHAMPION (65-71-73-65)
Woods, 32 at the time, entered the 2008 event in a rich vein of form despite having gone through multiple swing changes. His closing 65, which matched Robert-Jan Derksen’s record as the lowest round by a winner five years earlier, saw him come back from a record four shots to pip Martin Kaymer by one. Astonishingly it was Woods’ seventh win in eight outings at the time and he went on to win the WGC-Accenture Matchplay, finish second at the U.S. Masters before winning the U.S. Open in a memorable playoff with Rocco Mediate at Torrey Pines, the last of his 14-major victories.

2011 – Fading finish
T20 (71-66-72-75)
Woods faded with a closing 75, one of just three over par rounds the American has record during 28 competitive loops of the Majlis. Spain’s Alvaro Quiros recorded a hole in one on the 11th in the final round, just after running up a triple bogey on the 8th when three clear, to beat Dane Anders Hansen and South African James Kingston by a stroke. 2014 – 25th Anniversary
T41 (68-73-70-71)
Tiger raised hopes of a truly memorable silver anniversary with an opening 68. It wasn’t to be with Scot Stephen Gallacher going on to become the first back-to-back Desert Classic champion and join Els, Woods and McIlroy as multiple winners of the Coffee Pot. Still, Woods more than played his part in a party involving all past champions save for the late, great Seve, who was represented by his son Javier.