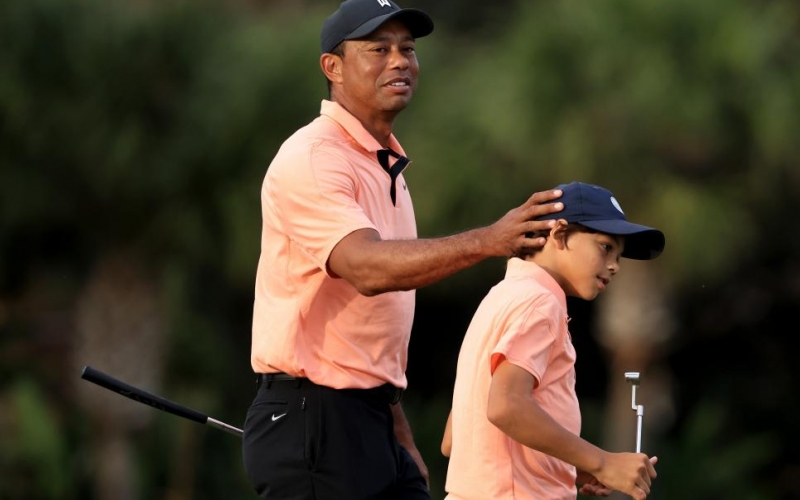 Sam Greenwood
Tiger Woods pats Charlie Woods on the head after they made birdie on the 15th hole during the first round of the PNC Championship.

By Dan Rapaport
ORLANDO —This is Charlie Woods’ favourite week of the year. He’s the reason, it should be noted, that his dad is here. Tiger Woods cannot walk even a perfectly flat golf course right now. Tour-level competition is miles away. But he is here, wincing and carting and grimacing because Charlie wants to be here.

The pair shot 10-under 62 on Saturday, the same score as their close family pals and playing partners, Justin and Mike Thomas. Stewart Cink and his son, Reagan, took the lead by shooting 59. Charlie drove the ball on a string and continues to thoroughly impress with his wedge distance control. With Tiger, you wouldn’t notice anything odd from 160 yards and in. The ball flight with the short irons is the same, his wedges look terrific, and Ol’ Faithful Scotty’s cooperating. “I can still putt,” he said with a wry smile, “that hasn’t left me.”

On the other hand, any shot that requires physical exertion is a bit dicier. Wood struggled to find the bottom with his driver, often clipping the grass and mishitting it. There were, however, hugely encouraging signs: TrackMan clocked one of Woods’ drives at 171 mph ball speed, which is around tour average, and he hit a soaring, 250-yard 3-wood into the par-4 14th. JT, for what it’s worth, loved what he saw.

“I was so impressed by the speed that he had and the shots he was hitting,” Thomas said. “At least from my perspective, it looked like a lot of the moves and everything were there. It just was, if anything, a little short. … Naturally you would think he’s not going to hit it as far, but, man, like that 4-iron he hit into three today, that was just ridiculous. I looked at him and as soon as he sat in the cart; he just kind of looked at me and smiles, and I knew exactly that that’s the kind of shots that he hits when he’s healthy.”

Woods can hit the shots, but he cannot walk the walk. Not yet. At present, he can’t walk even a flat golf course for nine holes, let alone a hilly one, for four straight days, while having to hit shots out of tour-thick rough. He hasn’t had to do that once this week given the shamble format. And so, as he’s reminded us ad nausem, tournament competition is miles away.

“Charlie and I had a blast playing together again, playing with the Thomas family; again, we’re extremely close so it was a bunch of fun there, was a lot of needling going on the entire day,” Tiger said. “We’re pulling pranks on each other and giving each other some under-the-breath remarks that I’m glad they didn’t capture. We had a great time. It was just a blast, and we had a blast last year on the first year it was the same. We had so much fun out there.”

The highlight of the day came away from the cameras, outside competition. After putting out on the 12th, the Woodses and Thomases were told about the traffic jam on the 13th tee. So they stuck around for an impromptu putting competition, just like you did with your pop as the sun set way back when. All four players dropped balls 60 feet from the hole. The greatest player of his generation, if not all time, went first. Two feet. Next, his son. Bucket. JT next. Bucket. Mike Thomas. Bucket.

“I’ve never seen anything like it,” Woods said after the round. “I don’t think any one of us has, right? Three 60-footers going down.”

The internet loved Charlie’s celebration; he raised his putter as it tracked toward the hole, spun around and did a little Johnny Manziel money gesture at his pop. It quickly flooded the web because everything Team Woods does floods the web. Tiger so famously kept his emotions and his private life hidden; now his deep adoration for his son is on display. Fans can’t get enough. Neither can fellow tour pros.

Ian Poulter, who lives about a 20-minute drive away at Lake Nona, made the trip to the Ritz-Carlton Golf Club with his younger son, Joshua. (His older boy, Luke, will be a freshman on Florida’s golf team next fall.) Ian looks up to Tiger. Joshua looks up to Charlie.

“Respect is Respect,” Poulter wrote on Twitter, “and so wonderful to see the relationship between Tiger and Charlie growing. I relate and want Joshua to be as inspired to continue to grow. As parents it’s all we want.”