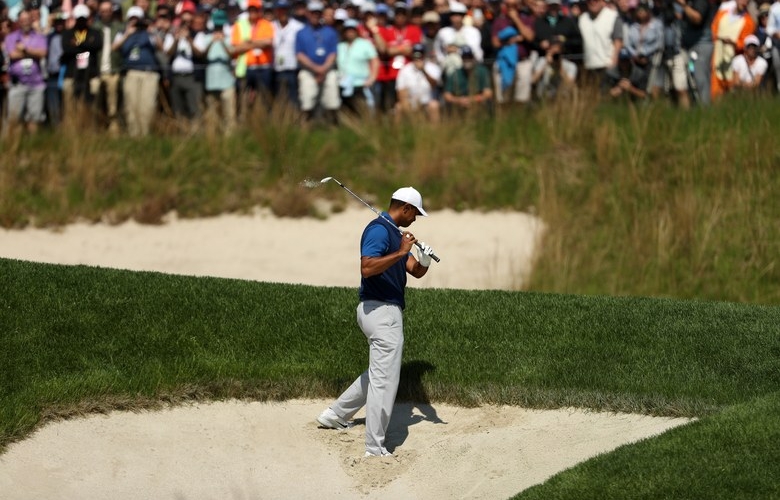 Tiger Woods plays from a bunker on the 17th hole during the first round of the 2019 PGA Championship at the Bethpage Black course on May 16, 2019 in Farmingdale, New York. (Photo by Patrick Smith/Getty Images)

By Dave Shedloski
FARMINGDALE, N.Y.— He appeared slightly subdued, and his play, in stretches, was substandard. Tiger Woods’ opening round of the 101st PGA Championship Thursday possessed more than a hint of rust that simply was too much for him to overcome.

Having not competed since his emotion-laden victory in the Masters and fighting an unknown ailment that limited his practice this week to nine holes, Woods stumbled early, rallied with some familiar brilliance and then receded, surprisingly, as his short game let him down. The result was a two-over-par 72, more than a little disappointing at rigorous Bethpage Black but downright dyspeptic playing alongside defending champion Brooks Koepka, who evinced a veneer of impermeability in firing a bogey-free 63.

Woods knows that game well. He’s just used to being the guy playing it.

“It wasn’t as clean as I’d like to have it, for sure,” Woods conceded after making two double bogeys and three bogeys. “Didn’t get off to a very good start. … And then found my way back around. Got it back under par for the day, and let a couple slip away with a couple of bad putts and a couple of mistakes at the end.”

Indeed, the 15-time major winner did not get off to a good start, his opening tee shot at the par-4 10th missing the fairway by one unfortunate yard and burrowing to the bottom of the thick rough. He flew the green with a wedge after laying up and missed an eight-foot putt resulting in a double bogey.

It marked the fourth time Woods, a four-time PGA champion, has opened with a double bogey or worse in a major. Just last year he started with a triple bogey at the U.S. Open at Shinnecock Hills, also on Long Island, and missed the cut.

He flew the green with another wedge at the par-5 13th, but got up and down for par. Still, he was not looking like Masters-winning Tiger. And things only got worse when he doubled the par-4 17th after burying his tee shot under the lip of a bunker and then three-putting from 30 feet, nullifying what seemed like a steadying birdie at the tough 15th.

He turned in three over par. Four holes later he was one under and T-5 on the leader board with a vintage run. An eagle putt from 31 feet at the fourth hole sent the New York crowd howling and capped a rally that included birdies at Nos. 1 and 2.

“I felt like I was getting back into the round,” said Woods, 43, who admitted he didn’t practice on Wednesday because he was feeling ill. “I fought my way back, and I had two double bogeys in through there and was still able to get it to under par for the day.”

Inexplicably, he quickly stalled. Three-putt bogeys at Nos. 5 and 7, and a poor chip that led to another bogey at the par-3 eighth left Woods with his fourth opening round over par in his last five starts in the PGA.

He insisted afterwards that he felt fine. But it was clear he ran out of gas and wasn’t as sharp as he needed to be with key parts of his game.

“I fought my way back around there, and, unfortunately. I just didn’t keep it together at the end,” Woods said.

“Yeah, his wedges might have been a little off, and then there were the three-putts, so you could certainly make that argument that he might be a bit rusty,” said Woods’s caddie Joe LaCava. “But he hit a lot of good long iron shots and the swing was there. Just some cleaning up to do is all.”

This championship has barely begun, but he’ll need to gear up as well as clean it up in Round 2 and at least get himself in the mix. Fortunately, he has a long history of doing that very thing.