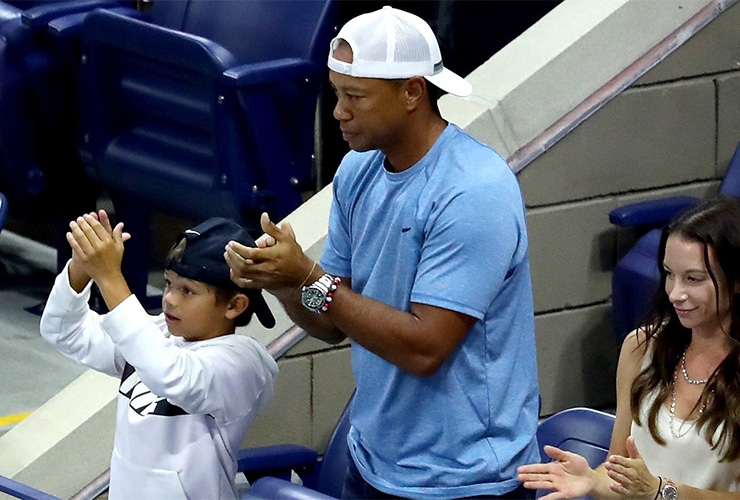 By Alex Myers
Welcome to another edition of The Grind, where we are sadder than anyone to see the end of summer. For others, fall golf is a real thrill—OH, LOOK! FOLIAGE!—but the temps are way too cold for my delicate taste. Heck, on Sunday it wasn’t even 60 degrees when I teed off at 7:27 a.m. I had to wear a vest AND a jacket! On Sept. 1! The horror! Anyway, bundle up, everyone. And in the meantime, let’s talk about everything else happening in the world of golf.

Korn Ferry Tour Championship: I’m not one of these golf purists who is going to tell you the KFT season finale was better than the Tour Championship, but it contained incredible drama in its own way, as usual. Watching guys go back and forth from having a job on the PGA Tour next season to being on the outs was riveting, and Doug Ghim provided the event’s lasting moment when he sunk this tester for par on 18 to graduate to the big leagues:

What a fantastic reaction by Ghim, who was one of nine players to jump into the all-important top 25 of the Korn Ferry Tour Finals points list. Of course, there were others who wound up outside the bubble. But let’s stay positive here. Putting up with the end of summer is sad enough.

Tom Lewis: This 28-year-old Brit needed no such drama at Victoria National. The former can’t-miss prospect couldn’t miss all week, winning by five shots to earn his PGA Tour card for the first time. Even more impressive is this was Lewis’ first start on the Korn Ferry Tour this season. And we don’t just mean since the Web.com Tour switched to being called the Korn Ferry Tour. No, this dude just carpetbagged his way to a PGA Tour card. 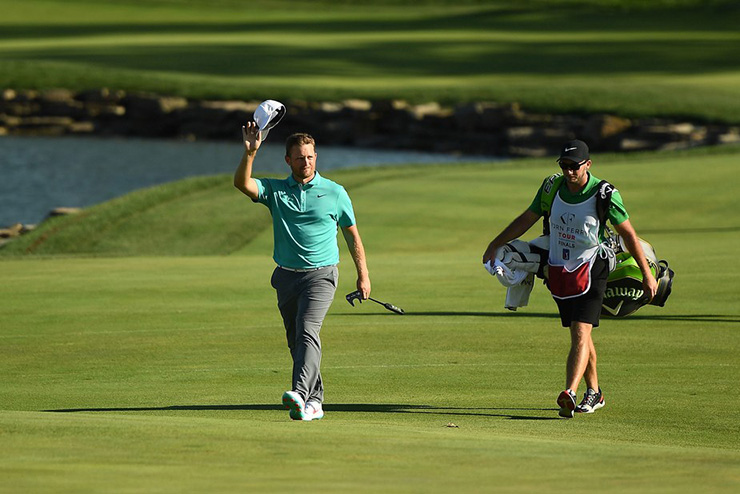 But good for him. And now he has the “good problem” of choosing whether to play predominantly on the European Tour or PGA Tour next season. Just a gue$$, but Lewi$ will play more in the U$A.

Sebastian Soderberg: The 28-year-old Swede (It was a good week to be 28) won a five-man playoff at the Omega European Masters that included Rory McIlroy. Not a bad way to pick up his first European Tour title. 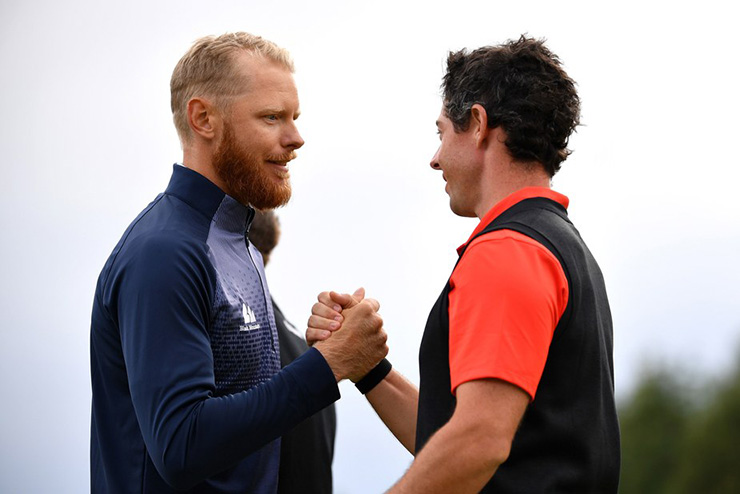 Lucky bounces: Especially when you haven’t won in nearly five years. Wes Short Jr. looked like he’d come up short again when his final approach shot came up short, but he used the rocks in the hazard to his advantage (Savvy!) and wound up two-putting for birdie and the win at the Shaw Charity Classic.

Can’t make this stuff up …

Wes Short Jr.’s second shot into the par-5 18th looked like it was heading into the hazard.

Thanks to the help of a rock, the ball landed on the green and Wes went on to make birdie for the @ShawClassic win. pic.twitter.com/KAQY6KDobi

“Good, clean living!” as my friend Roks used to say.

(My) unlucky weather: For important events, that is. Three weeks after playing only three holes in my first PGA Tour Pro-Am, I played a total of four holes in the only member-guest I was invited to this year. Womp-womp. This time, I managed to show up to lovely Aspetuck Valley Country Club on the one part of the one day that it stormed amid two weeks of perfectly glorious weather. At least it wasn’t raining (torrentially) when we took our group photo. That happened seconds later. 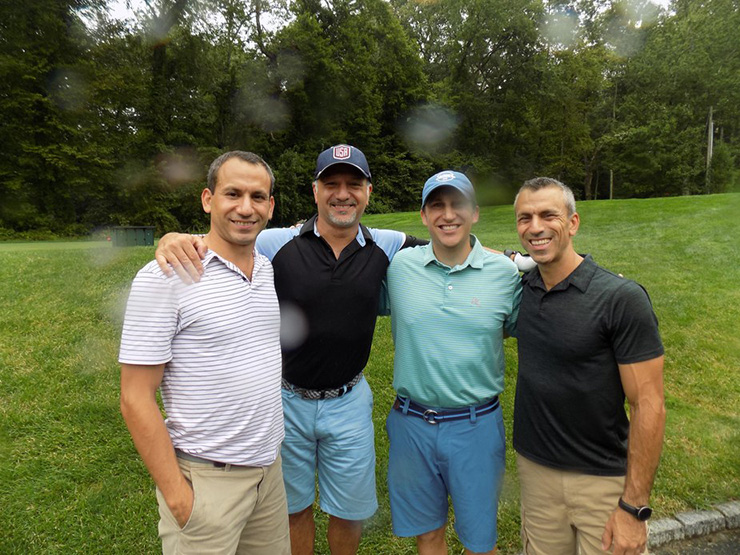 Thanks to my buddy Al for the look, but seriously, everyone, do NOT invite me to any important golf function going forward.

Paragliding: We’ve seen people doing this at places like Torrey Pines, but in Switzerland, Rory McIlroy had to back away from a shot because he was worried about hitting them:

How rude! Also, this looks dangerous! You couldn’t pay me Rory McIlroy FedEx Cup money to go up on one of those.

Brandel vs. Bob: Brooks Koepka’s dad, Bob, went after Brandel Chamblee on Twitter over the weekend. I love seeing someone stick up for his sons, and the back-and-forth was entertaining, but it was also a bit silly considering how much crow Chamblee has eaten regarding his Koepka commentary:

They say the NBA offseason has become more interesting than the season. If this is how golf’s offseason is about to go, sign me the hell up.

Not that I’m complaining. Keep this Twitter beef going, guys!

—There will be another five-man playoff on the European Tour: 1 MILLION-to-1 odds
—Tiger will win another major: 3-to-1 odds (Actual odds. Um … tempting.)
—I will never go paragliding: LOCK

Like father, like son. 💪@TigerWoods and his family attended the men's singles match between Rafael Nadal and Marin Cilic at the U.S. Open on Monday. pic.twitter.com/mREsyxTPir

Good to see. That surgically repaired knee must be feeling better.

Introducing Silvia Rosenberger. She’s from Germany and she can putt the freaking lights out. At last week’s World Amateur Handicap Championship, Rosenberger won a $5 putting contest and got one crack from 60 feet for $25,000. You can guess what happened:

ICYMI: Epic moment at the Myrtle Beach World Am last night when this German golfer casually drains a 100 footer to win $25,000!

“To have it all come down to one putt is pretty surreal. It’s one of those things where if you make the putt, it does wonders for you, and if you miss it, it could go the opposite way. Now that I’ve finally made the putt, it feels like I have the opportunity to make some noise on the big tour and I’m just really, really excited.” —Doug Ghim after earning his PGA Tour card on the 18th at Victoria National on Monday.

Good to hear, Doug. Because you only get one week off before the PGA Tour season starts.

THIS WEEK IN CELEBRITIES PLAYING GOLF

When Justin Timberlake needs a bunker lesson, he goes to one of the best: Rory McIlroy.

And how about the Green Bay Packers dressing up as “Happy Gilmore” characters?

Impressive. But … where the heck is Shooter?!

Phil had Justin Thomas on an episode of “Phireside with Phil” to tell another great story about Phil (although, we’re still waiting for that second part … ):

One of my favorite people on Tour …

My man JT (@JustinThomas34) joins me for a 2-part series to tell stories when we first played together. #PhiresideWithPhil pic.twitter.com/e0OhAcVYow

And Mickelson reminded everyone how great his calves are:

Running on the beach while holding weights is going to be featured prominently in his “Body By Phil” fitness series.

It looks like Patrick Reed has a sweet new ride:

Great to be back in Hamburg, Germany for the Porsche European Open! Before I left, I broke in my commemorative Masters GT2RS! Excited to play the next three events on the @EuropeanTour. #PEO @KLMOpen, @BMWPGA #1of1 pic.twitter.com/SP5XGIzJcb

It’s good to be a Masters champ. … Congrats to Hannah Green for winning her second LPGA title by one shot over Monday qualifier Yealimi Noh. Congrats to the 18-year-old Noh for even coming close. She’ll be back. … Shout-out to Golf Digest Executive Producer of Video Christian Iooss, who broke his leg in a surfing accident over the weekend. Yet another reminder of why you should retire from all sports and activities other than golf once you turn 25. Feel better, Iooss. … And finally, my daughter is convinced I’m Tim Robbins/Andy Dufresne from “The Shawshank Redemption”:

My daughter is convinced I’m @TimRobbins1 as Andy Dufresne (🐐), so, yeah, it’s a great day… pic.twitter.com/7tOSsyjFPC

And I don’t plan on correcting her anytime soon! Also, Tim Robbins liked this tweet. Man, I love Twitter.

What’s the best movie of all time (Other than Shawshank)?
Does Silvia lose her amateur status after winning the $25K in the putting contest?
How do you say “Quid pro quo” in German?