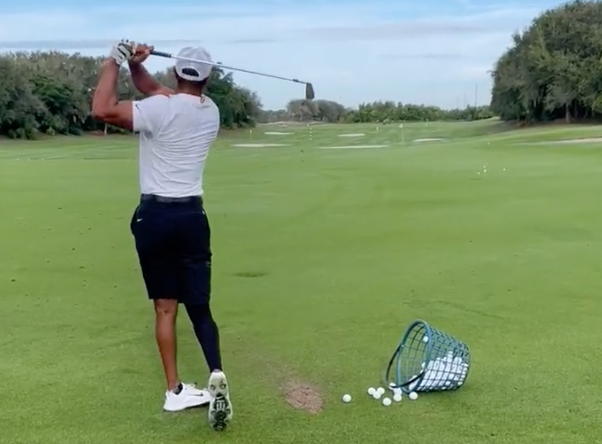 By Dan Rapaport
Tiger Woods gave fans an early holiday present by posting a video of him hitting a golf shot on Sunday morning. It is the clearest sign yet that Woods, 45, is planning to at least attempt a return to golf after his traumatic single-car accident on Feb. 23.

The video, which appears to be shot on the driving range of Medalist Golf Club near his home in South Florida, shows Woods flushing a short iron. He is wearing a sleeve on his right leg, which suffered the brunt of the damage from the crash, but his movement looks mostly uninhibited. Woods also has a bucket of balls next to him and appears to have taken multiple divots before the video, which would seem to point to a practice session rather than an isolated shot for the camera.

Woods suffered comminuted open fractures to the tibia and fibia of his right leg in the accident, which happened just outside Los Angeles. He was speeding down a windy stretch of Hawthorne Avenue when he lost control of his vehicle, which crossed over onto the wrong side before tumbling onto a hillside. He has stayed mostly quiet since February, providing only sporadic and vague updates as to his physical progress.

Videos have surfaced in recent months showing Woods walking under his own power but with a noticeable limp. He is expected to make an appearance and speak publicly at the Hero World Challenge, the exhibition in the Bahamas that benefits his foundation and begins Dec. 2.

At the time of the accident, Woods was recovering from a microdiscectomy procedure he underwent last December to alleviate nerve pain. It was the fifth procedure he’d had on his back but the first since his career-saving spinal fusion surgery in 2017.

Woods has posted similar videos in the past, opting to show himself swinging a club rather than give any detailed accounts of his recovery process. He told Golf Digest in May that he was focusing on walking on his own and declined to speculate on a return to competition.

Justin Thomas on a possible Tiger Woods comeback: ‘I know that he’s going to try’