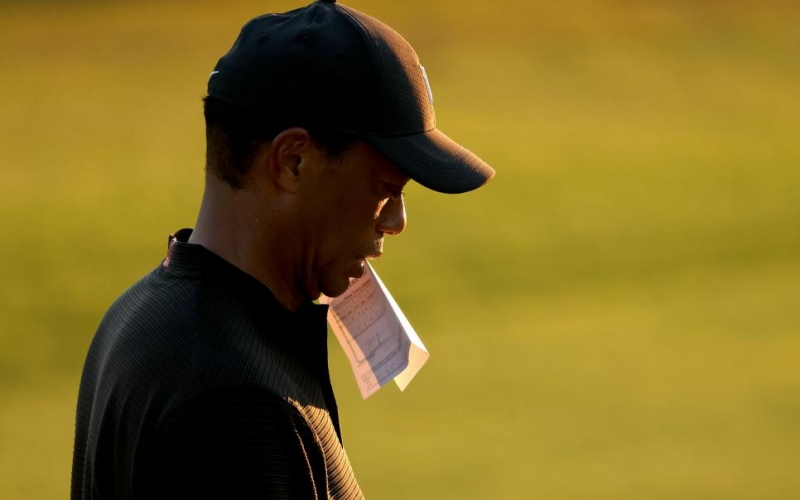 By Daniel Rapaport
AUGUSTA, Ga. — The scene wasn’t just set—it was straight out of a painting. Augusta National at Golden Hour. Perhaps the greatest player in the history of golf, wholly immersed in his craft. Hardly a breath of wind. A crowd of 40 or so people, at least 15 of whom have their own Wikipedia page, their permanent smiles suggesting they realized how lucky they were simply to be there.

The only thing missing? Birdies.

Tiger Woods strolled to a four-under 68 on Thursday. It was a breeze. Friday was a battle. Only able to get 10-and-a-half holes in before darkness—a downpour from Thursday morning has this entire tournament still playing catch-up—Woods played them in even par. At four under overall, he is not out of the Masters, not even close. But he likely won’t see friendlier scoring conditions all week, and he failed to gain ground on the leaders he trails by five.

Woods did not speak with media, because it was dark out and he has to get up early. Really, really early. Woods needs close to three hours before his tee time to warm his 44-year-old body, and he will resume second round at 7:30 a.m. on Saturday morning at Amen Corner. (You do the math on the wake-up time). He will face a 203-yard downhill approach, from the rough, to the 11th green. But he has a good angle, and assuming he can make par, he will have the tastiest holes of the course in front of him.

It boils down to this: over the course of a 72-hole tournament, you can afford one meh nine-hole stretch. The key is playing those nine holes in even par or one under, to avoid disaster. Woods knows he can absolutely still win this tournament, but he also knows he’ll have to play a lot closer to how he did on Thursday than Friday.

It started well enough. Back in the old days, the first hole’s tee shot gave Woods serious problems. It now seems like no big deal. He split the first fairway with a high cut but needed an up-and-down from right of the green to save par. He did exactly that with a delightful spinner off a tight lie. Woods’ short game has been extremely sharp through 27 holes—he thought he holed his bunker shot at the par-5 2nd for eagle, settling for a tap-in and the type of stress-free birdies he made so often in his prime.

He took a long look at the leader board behind the 2nd green before heading to the third tee, and you had the sense he felt he could get within arm’s distance in the two-plus hours of daylight that remained. He striped an iron down the fairway and his wedge was right on line, spinning back to the front edge but leaving an uphill birdie putt of 15 feet. It missed on the low side, which Woods will tell you is an absolute no-go at Augusta, because low-side misses like that one trickle out to four feet. The par effort caught the lip and his bogey effort was longer than the par putt.

He holed that one, but the tenor of the round had shifted. He needed an eight-footer to save par at 6 and made bogey from the front bunker at 7. But he birdied the par-5 8th after a nifty punch-hook 3-wood finished just short of the putting surface. That’s how you keep yourself in tournaments—you birdie the par 5s.

Woods will also be encouraged by his last five swings of the day, which produced two stress-free pars at 9 and 10 and a good-enough drive at 11.

Good-enough won’t get it done this weekend—not with the calibre of players between Woods and the top of the board. But he’s won this thing five times. He knows this.

More from Friday at the 2020 Masters
• Tiger Woods loses momentum, but holds on to his green jacket chances
• Abraham Ancer continues to prove that he’s a big-time player, he’s just missing one thing
• Bryson DeChambeau in danger of missing cut after disastrous third hole
• Jon Rahm hilariously (perhaps inadvertently) burns Bryson DeChambeau with two simple words
• Rory McIlroy had about as terrible a Friday morning as you could imagine at Augusta National
• Why these five guys are going to have an especially restless Friday night in Augusta
• Brooks Koepka’s play has been ‘super sloppy’ and he can still win
• Alert! Augusta National legend Jeff Knox has been called into action earlier than usual this week!
• Justin Thomas broke his odd Masters curse
• Bernhard Langer keeps building on the sneakiest good record in Masters history
• Bryson DeChambeau lost his ball in Augusta’s second cut, which we all figured was impossible
• Why you shouldn’t be surprised about Rory McIlroy’s up-and-down start at Augusta
• What you think about Dustin Johnson says more about you than him
• Who needs a driver at Augusta? Danny Willett cracks his, uses 3-wood off tee and shoots career low
• How the 36-hole cut is determined at Augusta National
• Bernhard Langer has become the oldest golfer to make the cut in the Masters