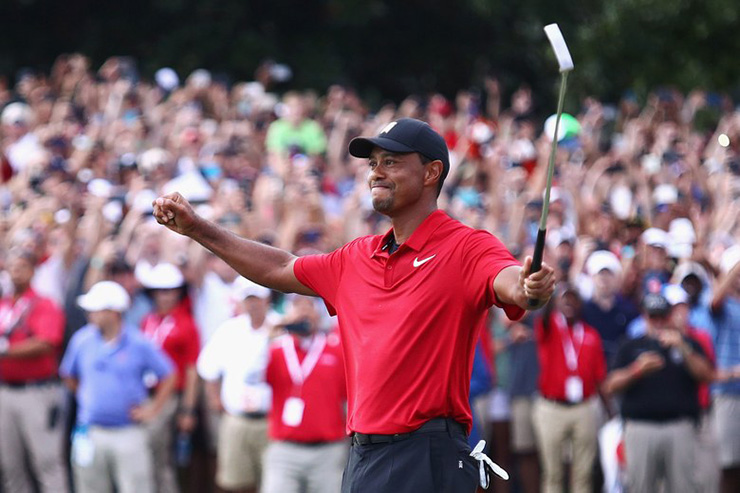 By Alex Myers
Tiger Woods is arguably the most-written about athlete in history. But now, the 15-time major champ will finally tell his own story.

HarperCollins Publishers announced on Tuesday it has acquired the world rights to the first-ever memoir by Woods. And the title is succinctly perfect: Back.

It’s an obvious nod to Woods’ remarkable comeback, but, of course, it also references the part of the body that plagued the legendary golfer to the point of wondering whether he’d ever return to competitive golf. After four back surgeries, including a last-ditch fusion procedure, Woods returned to action in December of 2017. He won the 2018 Tour Championship, his first PGA Tour title in more than five years, before winning the 2019 Masters, his first major in more than a decade and his first green jacket since 2005.

Back is described by HarperCollins as “a candid and intimate narrative of an outsize American life: from growing up a celebrated golfing prodigy to shattering centuries-old racial barriers as a young pro; from rising to unprecedented fame and global icon status to battling devastating injuries and personal issues; from enduring years of physical anguish to mounting an astonishing comeback at 43 years old, culminating with the 2019 Masters, where his thrillingly impossible victory captured the imagination and hearts of people around the world.” It will be the first Woods biography by Woods with full cooperation from his family and inner circle, although, he collaborated with writer Lorne Rubenstein on The 1997 Masters: My Story in a 2017 book chronicling his landmark first Masters win.

“I’ve been in the spotlight for a long time, and because of that, there have been books and articles and TV shows about me, most filled with errors, speculative and wrong. This book is my definitive story,” Woods said in a statement. “It’s in my words and expresses my thoughts. It describes how I feel and what’s happened in my life. I’ve been working at it steadily, and I’m looking forward to continuing the process and creating a book that people will want to read.”

I’ve been in the spotlight for a long time, and because of that, there have been books and articles and TV shows about me, most filled with errors, speculative and wrong. This book is my definitive story. Link in bio for more information.

Woods has been recovering from arthroscopic surgery on his left knee, but will return to action at next week’s “The Challenge: Japan Skins” and at the PGA Tour’s inaugural Zozo Championship.

No timetable on when the book will be released was given.

“Meeting with Tiger, speaking with him at length about the process of writing a memoir, I was delighted to discover how much he has to say, and how ready, how eager, he is to say it,” said HarperCollins executive editor Shannon Welch, who will edit the book. “He’s at a place in his career and his life where he’s thinking deeply about his story, the highs and the lows, and how it all relates and connects. I think the result will be extraordinary.”

When I started my Instagram account, I was just a regular 15-year-old girl who lived in San Diego, went to high school, had friends and played golf.