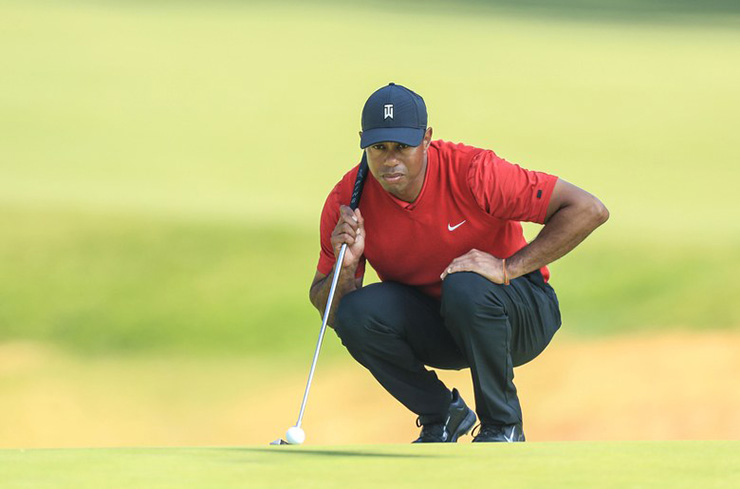 Tiger Woods lines up a putt on the par-4 12th hole during the final round of the 2020 Genesis Invitational. (David Cannon/Getty Images)

By Daniel Rapaport
Tiger Woods finished off the Genesis Invitational on Sunday with a six-over 77, his third straight over-par round after opening with a promising two-under 69 three days earlier.

“I did not do much well today,” Woods said with an easy smile (more on that in just a bit). “Good news, I hit every ball forward, not backwards, a couple sideways. But overall, I’m done.”

It was a disappointing performance at Riviera, where Woods has now competed in the tournament 13 times without a victory—the most he’s played an event on the PGA Tour and not won. He struggled with the Poa annua greens all week, finishing second-to-last in strokes gained/putting among players who made the cut, and was not able to control distances with his irons.

Interestingly enough, Woods’ week included two eagles, both of which came on the par-5 first, including one on Sunday. But he also made seven bogeys and a double on a golf course that grew firmer and more difficult as the afternoon wore on. All that adds up to a 10-over total that saw Woods finish in last place among players who made the 36-hole cut.

It was not his week on the course, obviously. But Woods’ time here was about more than how he fared inside the ropes. He has hosted this event for the last three years in conjunction with his TGR Live venture, but this was the first year the tournament formerly known as the L.A. Open was no longer an open. It’s an Invitational now, which means a reduced field size to 120, an increased purse and an elevated status.

And the first year was, by any measure, a marked success—four cloudless days, a challenging Riviera that flashed its teeth all week and a bunched leader board that didn’t sort itself until late Sunday afternoon, when Adam Scott prevailed for a two-shot victory. 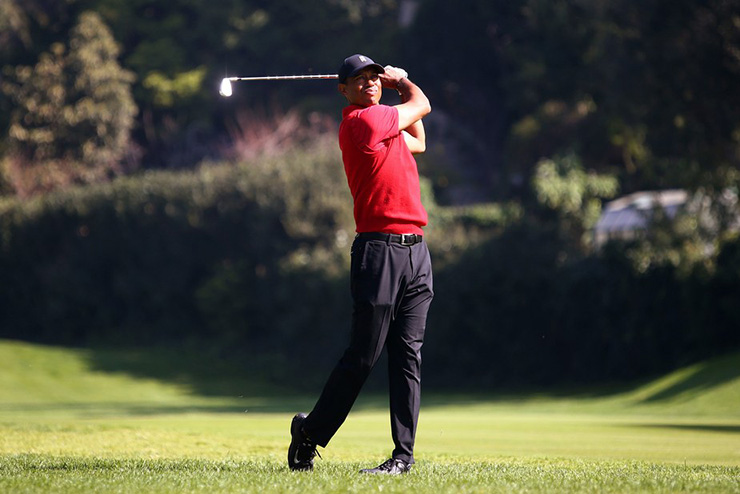 Woods plays a shot on the 12th hole during the final round at Riviera. (Tim Bradbury/Getty Images)

And on a more macro level, weeks like these where his game is off appear to bother him way less than they used to. He’ll head home to Florida, catch up on sleep, rest his body and begin training for his next tournament, whenever that may be. Woods will not be playing in next week’s WGC-Mexico Championship, but he’ll be back soon enough, and that reality alone is enough to make him smile. Playing poorly still beats not being able to play at all.

“Considering the fact that I look at it that this part of my career really didn’t exist a few years ago, to be able to do this—no matter what I shoot,” Woods said.

“It’s still disappointing, it’s still frustrating, I’m still a little ticked. But I also look at it from a perspective which I didn’t do most of my career: I have a chance to play going down the road. A few years ago that wasn’t the case.”