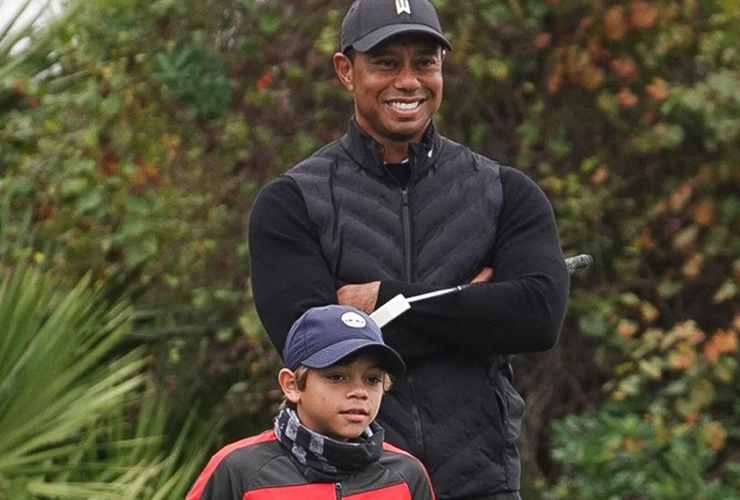 By Daniel Rapaport
ORLANDO — For once, Tiger Woods wasn’t the main attraction on a driving range. That honour went to a sweet-swinging 11-year-old who shares his last name.

All eyes at the Ritz-Carlton Golf Club, and on the golf interwebs, were fixed Thursday on Charlie Woods. He teed it up for a full 18 alongside his 15-time major winning father in the pro-am for this weekend’s PNC Championship, where Team Woods will make its debut in the event formerly known as the Father-Son Challenge.

The first thing you notice is the size difference. Charlie comes up to his dad’s belly button, a reminder that while he’s becoming a household name, the pre-teen remains a half-decade away from a driver’s license. The next thing that jumps out are the uncanny similarities—in their swings, yes, but more so in their mannerisms. The way they twirl their club after a striped drive. The way they recoil after going after one extra hard. The way they let their right arm dangle after an approach shot. Even the way they toss golf balls to each other, flicking the wrist as if shooting a three-pointer.

One thing is clear: Charlie has been watching his dad as closely as the rest of us.

“It’s so much fun for me to see him enjoying the game,” Woods said. He uses the word enjoy rather frequently when talking about his son’s golfing journey. Fun first, everything else a very distant second. “That’s the whole idea. Just enjoying it, hitting shots, creating those shots. Some of the shots he hit on the front nine, the back nine, it’s just so cool for me to see him enjoying the sport.”

The younger Woods has drawn attention this year for his strong play in junior tournaments over the summer, having won multiple nine-hole events in Florida with under-par scores. You needed to see only one swing on the range to understand why—his move is, simply put, breathtakingly good. Athletic and free, natural and powerful. He striped his TaylorMade driver down the centre of the first fairway, seemingly impervious to the 30-person crowd watching his every move. Such is life for Tiger Woods’ only son. 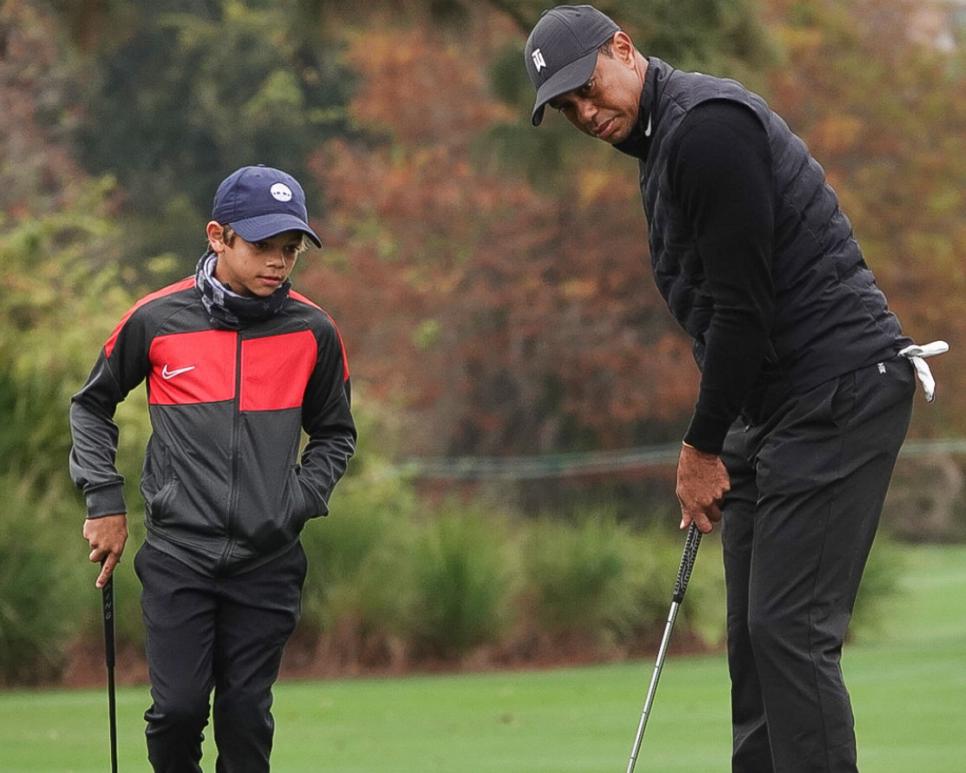 Twitter/PGA Tour Charlie and Tiger Woods practice their putting on Thursday ahead of this weekend’s PNC Championship.

“He’s been playing junior golf tournaments, and he’s been out in front, having people video him,” Tiger said. “This is a different world that we live in now. Everyone has a phone, everyone has an opportunity to video. He’s been out there. He’s enjoying it, and that’s the whole idea.”

Enjoying it, but also laser-focused. The competitive gene runs strong in the Woods clan, and Charlie did not seem to be in exhibition mode. He closely studied his yardage book on each tee. He discussed start lines and wind directions with his pop. He plotted his way around on a blustery morning, reaching the par-5 fifth hole in two (from a forward tee) and sticking his approach on the par-4 11th to kick-in range. And he even needled his father, imploring him to take aggressive lines and “fly it over the trees, dad!”

Team Woods will play another pro-am practice round on Friday before beginning the two-day scramble event alongside Justin Thomas and his dad, Mike, at 11:48 a.m. local time Saturday. There will be a third father-son duo in the group: Tiger’s caddie Joe LaCava and his son, Joe LaCava Jr., who is on Charlie’s bag this week.

Surely there will be more than a little trash talk in that group. Woods and Thomas have grown close over the years, and Charlie has hung around JT quite a bit back home in Southeastern Florida.

“He likes to needle me a little bit,” Thomas said with a smile, “I was joking with [Golf Channel’s Steve Burkowski], I have to remind myself that he’s 11-year-old sometimes and I need to watch what I say.

“They’re very similar. I mean, who wouldn’t want to be like your dad if your dad is Tiger Woods?”