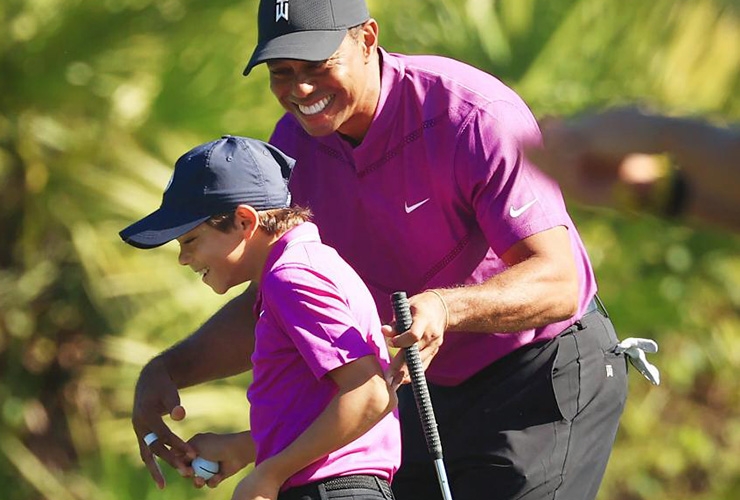 Mike Ehrmann
Tiger Woods and Charlie Woods react to an eagle on the third green during the first round of the PNC Championship.

By Daniel Rapaport
ORLANDO — Let’s get this out of the way first: Charlie Woods is 11 years old. He could wake up next Thursday and decide golf is for nerds. (And his father, for the record, would be perfectly cool with that.) It’s vital to keep that in mind in the days and months and years ahead. He’s a kid. A kid with a mega-famous dad, but a kid all the same. Team Woods is playing in this thing for fun. Nothing more, nothing less.

With enjoyment as the one and only goal this week, Day 1 cannot be considered anything but a smashing success.

“We had so much fun being around one another,” Woods said. “Cheering each other on. It was perfect.”

Oh, and the kid can play.

Tiger Woods and his mini-me shot 10-under 62 on Saturday at the PNC Championship. With one day left in the scramble competition they sit four behind Matt Kuchar and his son, Cameron, who shot 14-under 58 to take the lead at the halfway point.

Not that anyone really cares about scores this week. This is about memories, about those moments where you cannot help but smile. Charlie didn’t wait long to produce one. On the par-5 third, the younger Woods pulled his drive a bit, a set of trees standing between his ball and the hole. Team Woods still opted to use that ball, which meant Charlie would have to hook a 3- wood right of the tree and have it curve left of a bunker guarding the green. 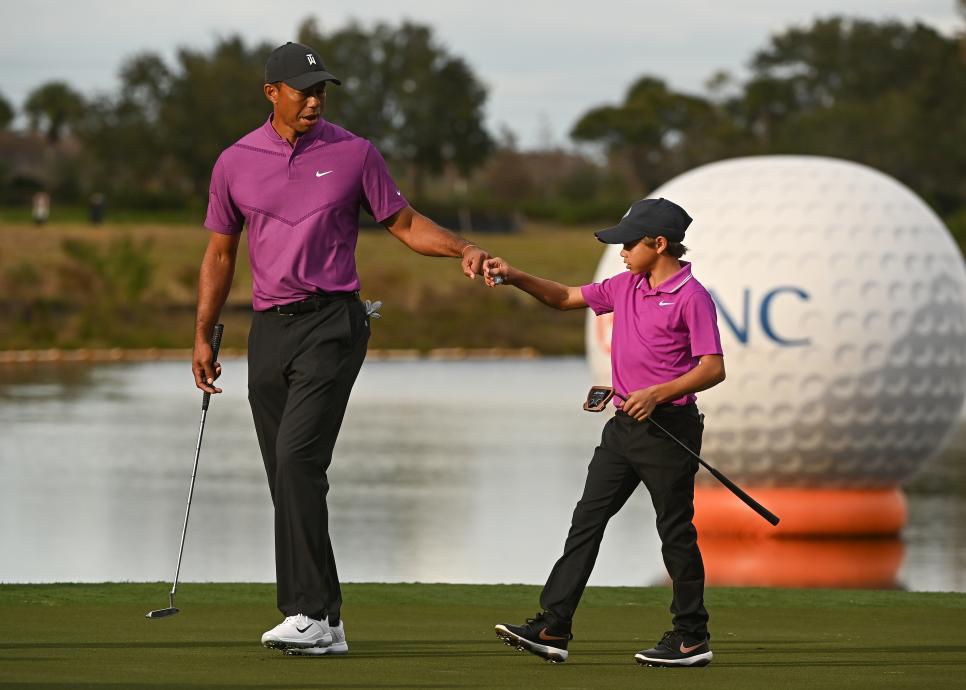 Ben Jared
Tiger Woods fist bumps his son Charlie Woods after making a putt on the 16th green during the first round of the PNC Championship.

As with every shot Charlie hits, it was his idea. Tiger is the furthest thing from a helicopter parent on the golf course. If Charlie wants to discuss a shot, great. If not, great. So after Charlie told him he thought he could pull it off, Tiger’s advice was simple. “Just hit it.”

He took a mighty lash—at least by pre-teen standards—and contorted his arms on the follow-through. A page out of dad’s book. It finished four feet from the cup, and he poured the putt right in the middle. An eagle. His eagle. First one ever.

It was the signature moment of a day every golfing father and son dream about. The weather was mostly perfect, as were the matching purple-and black outfits. A beautifully conditioned course, not too difficult, and a late-morning team time with another father-son they’re close to.

With the Woodses, closeness means competitiveness. They traded barbs with the Thomases all day. On the fifth hole, after Charlie ripped a tight draw down the center, Justin Thomas told him, “You’re so much better than your dad, it hurts.” Charlie returned the favor on 13, where JT pushed his drive into a bunker down the right. He arrived to find a note by his ball:” DRAW HOLE! Love, Charlie.

“Having the entire Thomas family out there, to share all these moments. The conversation we had all day, amongst each other—priceless.”

Yes, Tiger and Charlie will never forget the first time they teamed up, and especially the magical first nine holes, which they played in eight-under 28. Six birdies, and Charlie’s eagle. The younger Woods hit such a groove midway through the round that, particularly off the tee, that Tiger didn’t even bother hitting his shot from 100 yards back. He wasn’t going to do any better than his son. Often times in this event, the major champion is responsible for 80 percent of a team’s score. Today, it was genuinely close to 50/50.

Think about that for a second. Charlie Woods is no stranger to cameras or attention. Photos and videos seem to pop up on the internet any time he plays junior event. But this was another level. A solid 100 people watching his every step. Multiple television cameras. He was, to use an age-appropriate word, awesome. Tiger wasn’t surprised.

“I’ve seen this all along,” Woods said. “Probably not a lot of people have. But a lot of the shots he’s hit, I’ve seen them back home at Medalist this entire year. This entire pandemic, he’s hit these shots. The junior events he’s played in, he’s hit a lot of these. Just a matter of stringing these out for 3.5 hours, it’s a totally different deal.”

After the final birdie dropped at 18, Tiger trudged along to his media obligations while Charlie darted to the practice range.

“Trying to make sure that Charlie has the right environment. He’s sheltered, he’s away from all of this,” Woods said in front of a microphone. “What I have to do—making sure I do all of it, so he can practice and play, and enjoy the golf side of it. I’ll take care of all this stuff.

“A lot of people are trying to use him to build up, or write, or talk about things. Just making sure he’s able to have fun playing the game of golf.”