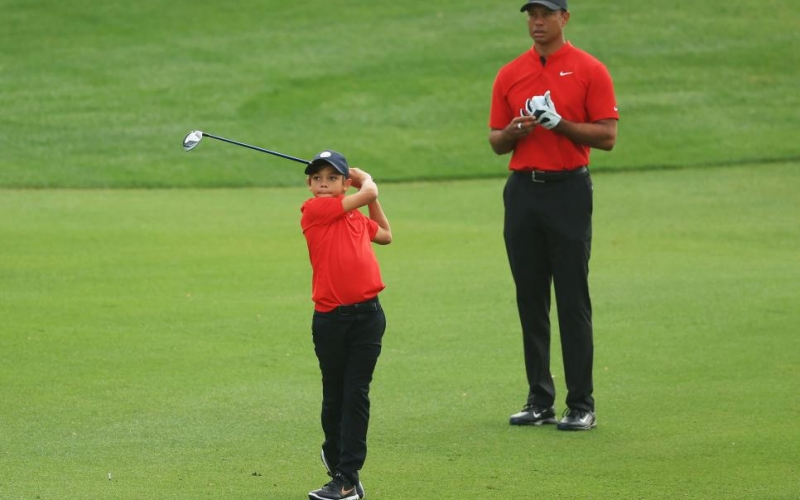 Mike Ehrmann
Tiger Woods watches son Charlie plays a shot on the third hole during the final round of the 2020 PNC Championship.

By Daniel Rapaport
ORLANDO — They say every golf tournament has one winner and a whole bunch of losers. Whoever said that has clearly never watched Tiger Woods play golf with his son.

“I don’t think words can describe it,” Woods said. “The fact that we were able to have this experience together, Charlie and I. It’s memories for a lifetime.”

On Sunday, Team Woods shot a second-straight 62 to finish the PNC Championship at 20 under, seventh place overall, five shots behind their buddies, Justin and Mike Thomas, who closed with 57 for a one-shot victory. Had the Woodses holed a few more putts on their front nine, perhaps they could have made a run for the title. They made too many pars, and pars simply don’t cut it in a scramble format.

But who cares? This week was never about a trophy. Tiger has plenty of those; he only has one son. This was about making sure Charlie had the time of his life playing alongside his dad. The actual golf—that part was extra.

Extra, and spectacular. The younger Woods impressed throughout the week, from his first striped tee shot in Thursday’s pro-am round to the one on the 18th tee on Sunday. He made the first eagle of his life on Saturday, a moment he’ll never forget. A day later, after pouring in a 10-footer, he unleashed a fist pump straight out of pop’s playbook. A moment we’ll never forget

“[He] made a good putt there,” Tiger said. “His tee shot, my ball hit the flag and it was just an uphill putt. Poured it right in the middle.”

A day after setting the Internet on fire with a front-nine 28, Team Woods got off to a slow start Sunday playing alongside David Duval and his son, Brady. Woods and his old rival enjoyed catching up some two decades after they wrestled each other at the summit of the sport.

“We played the World Cup down in Argentina, in Japan. Our teamwork. Playing with each other in the Ryder Cup, all our experiences battling each other for number one in the world,” Tiger recalled. “We were both talking about it—we miss this. To be able to do it together again, take it all in. We haven’t been able to perform like this together in jeez, what, 20 years?”

Charlie bear-hugged his dad on the 18th green on Sunday then could not wipe the smile off his face as he walked away from the scorer’s tent, gushing about the Thomases’ round and smiling so brightly you couldn’t help but join him. After congratulating Justin Thomas on his victory, the first thing Charlie told him: “Dad and I hit it to 23 feet on 8 … and three-putted!” He is, after all, his father’s son. 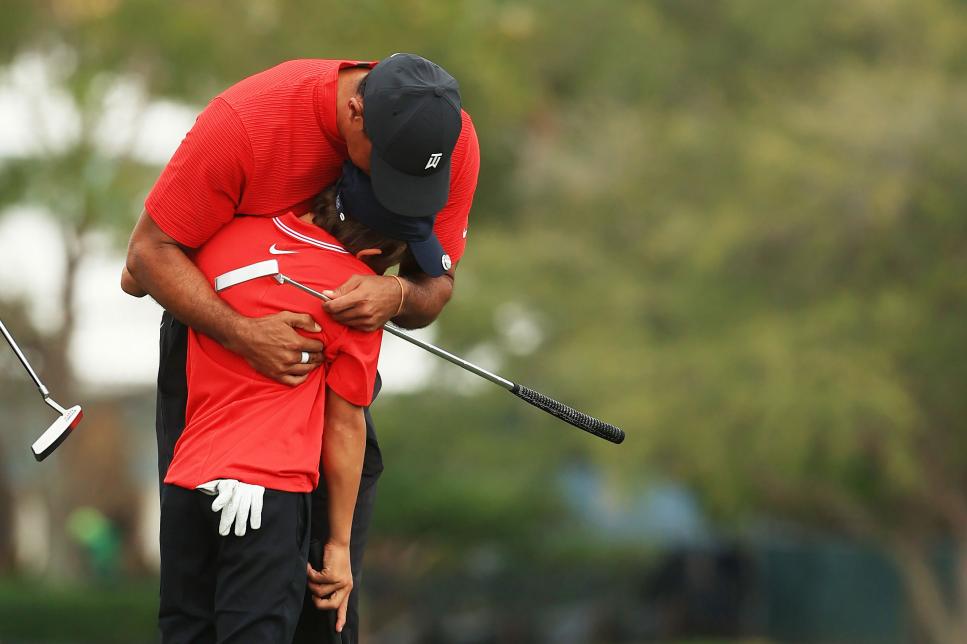 Mike Ehrmann
Tiger Woods and his son Charlie hug on the 18th green at the conclusion of play on Sunday.

That was the lone bogey of a day that included two eagles, both the product of Charlie’s drives and Tiger’s approaches. For the second straight day, there were a number of holes where Charlie played first, pumped his tee shot down the middle of the fairway, picked up his tee before the ball landed, turned and gave Tiger the “thumbs up,” and Tiger didn’t bother hitting. Dad was proud as hell, every time. Even after the bad shots, which were sparse. Charlie never seemed to notice any of the 200-or-so people watching his every move, nor the bulky TV cameras that were never far from his little face. Not bad for a sixth-grader.

“Charlie did great,” Tiger said. “It’s just like being at home at Medalist. Get into your own world. Hit the shot you see and execute.”

Notice the way he phrased that: Charlie did great. Not “we did great.” Tiger lets his son breathe on the golf course, lets him work his way around. Of course, Tiger is there to answer any and all inquiries, but they have to originate from Charlie. Tiger simply will not push him.

Ask Tiger any question about his son’s development as a golfer and you’ll get basically the same answer: It’s about making sure he enjoys it. That was the theme of this week. All the philosophical debates over how this event was covered, all the side-by-side swing comparisons—none of that stuff matters to Team Woods. Not this week, and not ever. They’re too busy enjoying themselves. 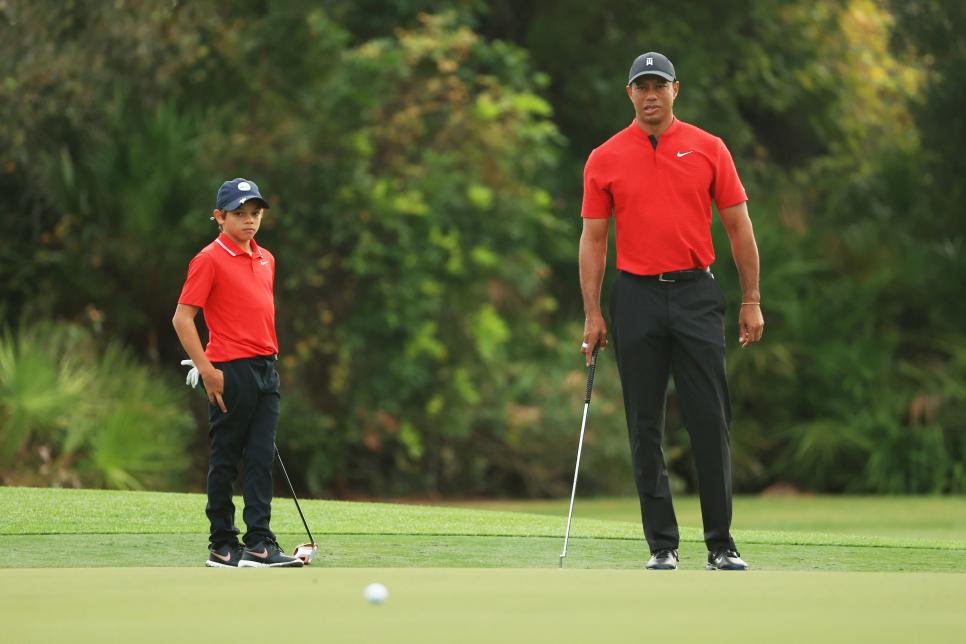 Mike Ehrmann
For Tiger, the week was a success because it was all about having fun with his son.

“Golf is fun,” Tiger said, and you could tell he meant it. Sounds simple enough, but we’re not sure he’d have said the same thing 15 years ago. Or, at least, whether he’d have meant it.

“That’s why we play. It’s because of enjoyment. And doing it together.”