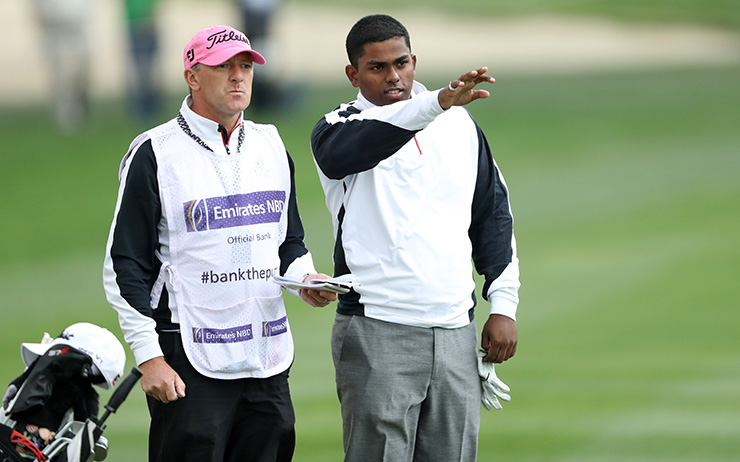 By Kent Gray
Following his historic run to the semifinals of the U.S. Junior Amateur Champion in Kansas last month, Rayhan Thomas admitted that he was “progressing nicely” but needed to keep putting himself under the blowtorch to continue his development.

“I’m trying to compete more in the US and in Europe and in big amateur events around the world, which is essential for me to put myself in pressure situations and see how I react, get feedback from it, learn from it and move on and improve,” the 17-year-old told The National’s John McAuley at the time.

It’s fair to surmise the MENA Tour member is ready to move on from the 115th Western Amateur after missing the initial 36-hole cut at the prestigious event in Glencoe, Ilinois on Wednesday. There will be plenty of lessons to reflect upon too as he eyes a busy second half of 2017.

Starting his second round from the 10th tee at Skokie Country Club in a share of 49th and just outside the top-44 and ties cut-line (following an opening even par 71), Thomas got to three under for the tournament with an eagle three on 13 and a birdie on 16.

But from the relative comfort of his brief T17 position, Thomas bogeyed 18 and then mixed two birdies with four bogeys and two doubles in a homeward six-over score of 41. The Dubai-based teen eventually signed for a 75 to finish +4 for the championship, five shots shy of the cut and 16 shots adrift of Australian pace-setter Ruben Sondjaja (66-64 for a -12 aggregate of 130).

They say you learn more from losses and that will inevitably be the case for the level headed Thomas who moved up to 66th in the amateur world rankings following his Kansas bronze medal.

Awesome week at the #usjunioram this week at Flint Hills National, Kansas. Thanks to the club and the @usga for their warm hospitality and amazing golf course. Also huge thanks to everyone for all the support this week. #progress #dubaicreek #titleist #silverback

Thomas certainly has plenty to look forward with the highlight being the Junior Presidents Cup, to be played on the eve of the senior event at Liberty National in Jesery City, New Jesery from September 26-October 1.

The Indian teen is a lock for Trevor Immelman’s International team for the Jnr event at nearby Plainfield Country Club on September 25-26. The 2008 Masters champion has enlisted nine-time major champion Gary Player as an honourary captain while U.S. captain David Toms, the 2001 US PGA Champion, will have Jack Nicklaus in a similar role, promising the likes of Thomas extraordinary insight into big time performance.

Beforehand, Thomas will be out to defend his home Dubai Creek Open MENA Tour title (September 11-13) and has indicated he will also have a tilt at the developmental tour’s Golf Citizen Classic at the Els Club, Dubai the following week.

There is also a chance Thomas could contest the 91st (British) Boys’ Amateur Championship with the under-18 event to be hosted at Nairn and Nairn Dunbar on the shores of the Moray Firth from August 15-20.