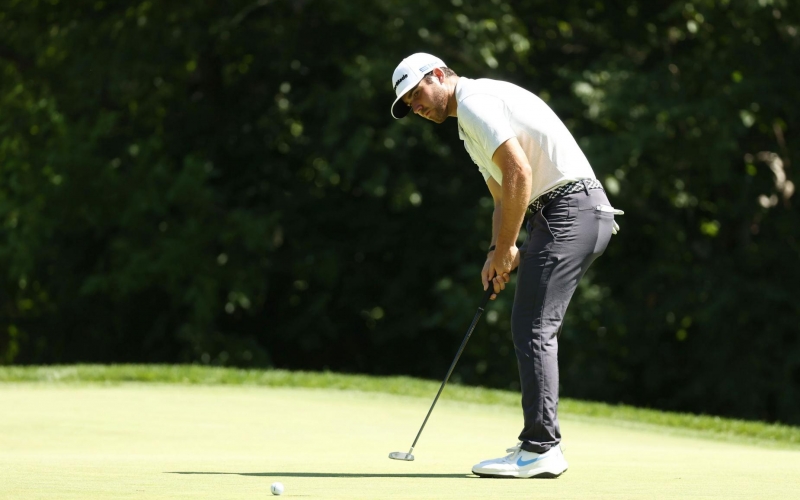 Matthew Wolff’s second-round 64 at the 2020 Rocket Mortgage Classic was the second-lowest of his still nascent PGA Tour career. (Gregory Shamus)

By Ryan Herrington
Matthew Wolff, age 21, had never met Vijay Singh, age 57, prior this week’s Rocket Mortgage Classic, and says he didn’t know much about the 34-time PGA Tour winner before being paired with him (and C.T. Pan) for the opening two rounds at Detroit Golf Club.

“I think he was a little before my time,” Wolff said on Friday. “No, I’m just kidding. Don’t tell him I said that.”

There’s more truth, however, to that statement then either of the two might like to admit. Wolff was born in April 1999, nine months after Singh won the first of his three major titles at the 1998 PGA Championship. Wolff was only 5 in 2004, the best statistical season of Singh’s PGA Tour career.

Yet playing with the World Golf Hall of Famer proved anything but a stressful experience for Wolff. After posting an opening-round 69 on Thursday, Wolff shot a second-round 64 to take a share of the lead at 11 under through the morning wave of play on Friday.

A run of six-straight birdies in the middle of the round—in which no made-putt came from longer than 11 feet—helped fuel Friday morning’s effort for the 2019 NCAA champ at Oklahoma State. Even with a bogey on his second-to-last hole of the day, Wolff’s 64 was the second-lowest he had shot in 75 career rounds on the PGA Tour.

Wolff’s lowest score came a year ago when he shot a third-round 62 en route to his breakthrough victory at the 3M Open. For that round, Wolff was paired with another PGA Tour Champions golfer, Tom Lehman, age 60, something that wasn’t lost on the young phenom.

“Maybe it’s something about the old greats, me feeling like I need to impress them or something like that,” Wolff said.

Wolff said that getting off to a solid start, a birdie on his first hole, then five more to make the turn in a six-under 30, was critical in terms of clearing his mind.

“I just felt like, you know, I wasn’t really worrying about the cut at that point, I was worrying about putting myself in the best spot and keep on making more birdies,” Wolff said. “It was nice to not be around the cut this time and to put myself into a good spot going into the weekend because as I’ve learned the last couple weeks you definitely can’t win on the first two days, but you can sure as heck lose.”

Of course, following up his good play with two more solid rounds is equally important for Wolff’s psyche. Wolff has broken par in a weekend round only once since February.