The Sunday pairings come out amid slight tension between Tiger & Ernie 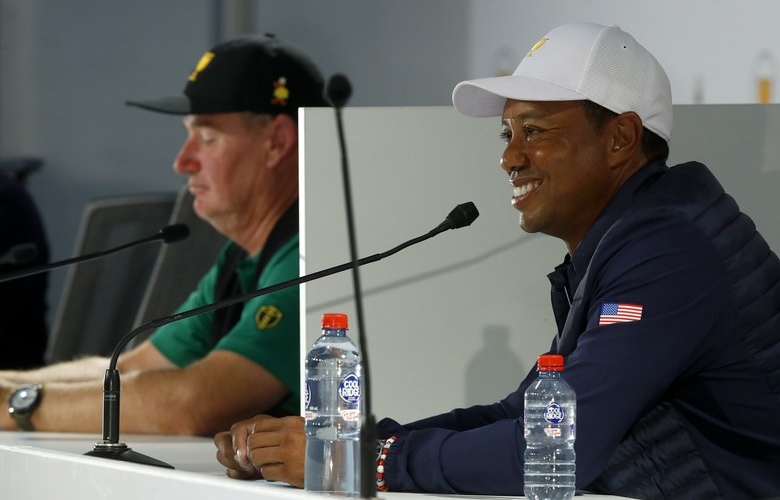 By Shane Ryan
MELBOURNE — There are many engaging and positive storylines coming out of the 2019 Presidents Cup, and there will be many more to come as the teams head into Sunday singles in an outright duel, with the Internationals holding a slim 10-8 lead. Slim, but meaningful—it’s the first time they’ve held a lead before the final session since 2003.

Despite the terrific captaincy of Ernie Els, the late surge of the Americans, and the increasing involvement of a rabid Aussie crowd, it’s also true that this particular Presidents Cup can’t escape the spectre of Patrick Reed. He ensured that he’d be a central figure the minute he swept the sand at Tiger Woods’ Hero World Challenge in the Bahamas, and when his caddie and brother-in-law, Kessler Karain, had an altercation with a fan on Saturday and was subsequently barred from participating in Sunday singles, it was a guarantee that his presence would pervade the final pairings press conference, too.

When asked about the crowds in that presser, Tiger said that some “have had a lot to drink and have gone over the top,” while adding that, “it’s part of the deal. As long as, you know, the fans are respectful, and that’s all we ask is for them to be respectful, and hopefully, they will be excited tomorrow and into the matches and be very respectful of all the players.”

The words don’t quite capture the tone, or the mood. Tiger has been terse in general at these press conferences, but before Saturday night the terseness seemed to mark a kind of competitive defiance, where Saturday he seemed irritated. As he spoke about the Australian crowd, he was emphatic, as though he was lecturing a misbehaving pupil. The presser wore on after his response, but after a question unrelated to the crowd, Ernie couldn’t keep his silence any longer:

“I just want to say one thing about the crowd,” he began. “I’ve played in many Presidents Cups. I’ve played in the U.S. many times. If you look back at New York and how these players were treated in New York, this crowd is pretty quiet.”

He proceeded to compliment Tiger on his own professionalism, how he’s handled heckling, and then returned to his point: “But I must say, this Aussie crowd, OK, they got a little bit boisterous this afternoon with a couple of beers, but which crowd doesn’t? You take it and you move on.”

He was polite, he was respectful of Tiger, but it was an unmistakable crack back at what he perceived as slander against the Australian fans who have supported his team. He was telling them, I thought, that he appreciated them, but simultaneously delivering a message to the Americans: Quit whining.

They shook hands after, and all was cordial, but it was an interesting moment of tension between two great champions.

These are the Sunday singles pairings:

And some very brief thoughts on each…

Abraham Ancer vs. Tiger Woods: The interesting thing here is that Ernie picked first, knowing—as he allowed later—that whoever he picked would likely be playing Tiger, with a slim chance of Justin Thomas. To pick Ancer, one of his toughest players this week, is an aggressive play when it must have been tempting to put a weak player out early and force Tiger to either waste himself against a Haotong Li type, or play further down a lineup. Instead, Els led with confidence, and this will be a huge blow against a top player for whichever player wins.

Hideki Matsuyama vs. Tony Finau: Hideki is 2-1 and Finau is 0-1-2, but both have been in strong form. Two of a kind here and a compelling second match.

C.T. Pan vs. Patrick Reed: Putting Reed out against Pan was Tiger’s choice, and the idea was clearly to not saddle the put-upon Reed with too strong a personality. That said, Pan has already met Reed twice this week, and beat him both times.

Haitong Li vs. Dustin Johnson: Li has been the worst golfer on either team, and Els seemed to see an opportunity to sacrifice him here against DJ.

Adam Hadwin vs. Bryson DeChambeau: Bryson has struggled for the Americans, and his confidence can’t be high after being benched all day Saturday by Tiger. Hadwin was benched twice too, but it was because he was sick.

Sungjae Im vs. Gary Woodland: They tied in Friday foursomes, but Im has been slightly stronger overall, with a 2-1-1 record. Advantage to the Internationals here.

Joaquin Niemann vs. Patrick Cantlay: Niemann’s last shot on Saturday afternoon was a gorgeous approach from difficulty that set up a winning birdie putt … that his partner missed. But after a so-so Presidents Cup, he should be coming in with confidence. Cantlay beat him on Friday, though, and is also coming off a win.

Adam Scott vs. Xander Schauffele: Scott’s putter was abysmal on Saturday afternoon; without that, he’ll struggle.

Byeong Hun An vs. Webb Simpson: Massive advantage to the Internationals. Simpson has struggled mightily with Patrick Reed, going 0-3 before sitting the last session.

Cameron Smith vs. Justin Thomas: Els had a conundrum when Tiger put Thomas out—Smith, Oosthuizen, or Leishman. He chose the weakest of the three players, perhaps wanting to save his best for slightly weaker opponents.

Louis Oosthuizen vs. Matt Kuchar: Oosthuizen has never lost in Presidents Cup singles (1-0-2) and Kuchar has never won (0-4-0). Hard not to think the advantage goes to the South African here.

Marc Leishman vs. Rickie Fowler: Leishman hasn’t looked especially great, but he hit a clutch shot on the 18th Friday to take down Fowler and Thomas after a massive comeback. Rickie has been solid, but not spectacular. A final match where it’s hard to find an edge.