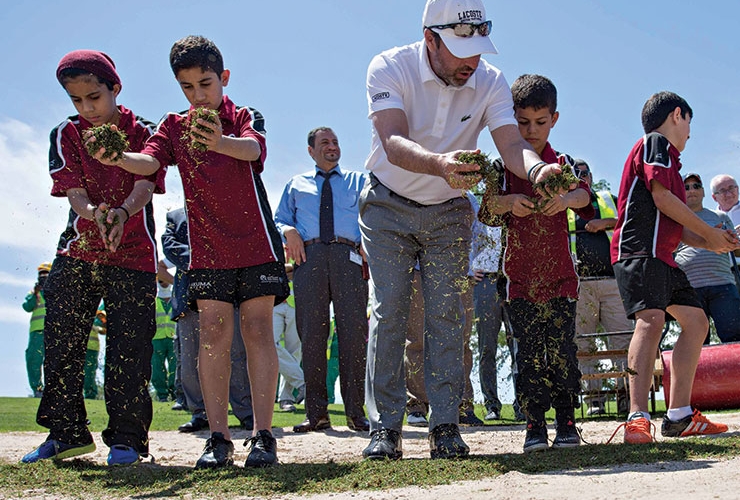 As it nears completion, the Qatar International Golf Club is promising to bring a golf revolution to Doha and emerge as one of the best facilities in the entire region. We sat down last month with the man at the creative helm of this ambitious project, two-time Masters champion José María Olazábal

It may have hosted a top European Tour event for nearly 20 years now, but the growth of golf in Qatar has effectively been dormant for the duration of this time.

That is set to change in a big way this year however, as the Qatar International Golf Club facility (with its Pearl Coaching Programme featuring SNAG Golf already in full swing) is well on schedule to open for play in early 2017.

Golf Digest Middle East travelled to Qatar to check out the progress of the course and meet with its famous designer, José María Olazábal, an accomplished architect as well as one of the game’s legends, and a man who prides himself on leaving a legacy – and not just a signature – on the design projects he undertakes.

We arrived to find Qatar not just rising from its golfing slumber, but positioning itself at vanguard of the game’s future. Not only is the QIGC a globally unique concept, but how many other courses under construction have invited a large group of school kids already signed to their junior programme to help a two-time Masters champion seed the greens?

Energised by the welcoming committee, Olazábal strode the immaculate turf of the 13th fairway, stopping to offer chipping advice to youngsters and encouraging a group of other kids and parents to help him evenly disperse the sprigs of paspallum grass across the newly shaped putting surface. 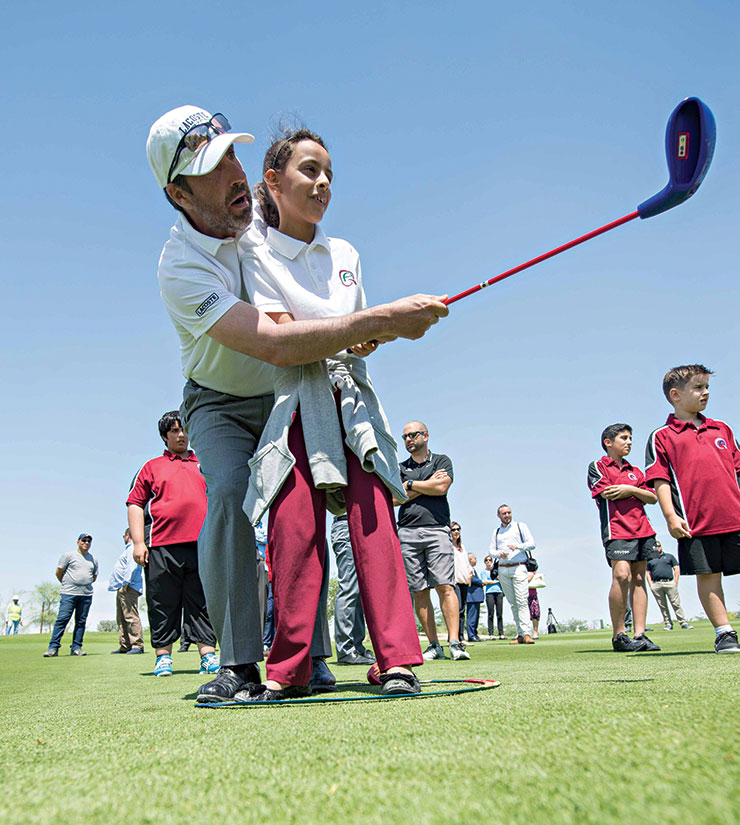 Even in this constructional phase, it is clear that when open, the Qatar International Golf Club will be a very high calibre proposition. The turf is already among the finest we have seen in the region. Paspallum has always been the ecologically preferred choice, but scientific improvements now mean it’s no longer a compromise as a playing surface.

Located in Education City and comprising of an academy, a state-of-the-art practice area, par 3 course, unique six-hole course and the championship course itself, the QIGC promises to provide a worthy home for every level of player, and bring many more new recruits into the game on a local level.

With his impromptu lesson on golf course construction complete, we had the chance to sit down with Olazábal and find out more about the project.

This is no ordinary golf course project, is it? how have you found your experience here in Qatar so far?
JMO: It’s been interesting. Obviously it has taken a little bit of time, but the progress has been good, especially over the last few months. The grass has taken really well on the back nine. We’ve already started seeding the greens, and in that regard it has been remarkable to see things start coming together. To hear that 2,000 kids have already signed on for the golf, I’m extremely happy with how the Pearl Programme is taking shape.

The idea of the golf course here in Education City was to incorporate the entire journey, from the very beginning when you start with your first lesson, to the chipping area, to the par three course and the six-hole golf course and finally onto the championship course. On top of that, we’ve taken it a step farther by going to the schools and bringing the game to more people. Our goal is to reach 4,000 kids by the time the club opens. We are bringing professionals to teach those kids the basics of golf, and I’ve heard that some of the schools have taken golf into their own programs, which is a huge step, considering that there are less than 100 active Qatari golfers. Have you ever come across a golf project like this one?
To the best of my knowledge, what we are doing here in Qatar is unique on a global level. For a club to go to the schools before even opening for play and actually take the game outside of its boundaries, and then to provide such a thorough path of development from within the game, that is an exciting thing to be involved with.

Was the idea for a six-hole course born out of the current focus on speeding up the game?
Everyone in golf now is fixated on solving the issues of slow play, and cutting the time it takes to play golf recreationally, but our concept for the six-hole course began way before this was topical. The idea behind it is the fact there are a lot of business people or family members who don’t have five hours of spare time.

Playing a six-hole course gives you the chance to experience all those elements of a full course, but at the same time you could bring your family and finish the round in a reasonable amount of time. On top of that, if you’re working and you have a break of a couple of hours, the six-hole course is there for you. Maybe it’s not as demanding as the championship course, but it’s very close.

What type of layout is this going to be? There looks to be plenty of sand and water, as you would expect with a course in the Middle East.
While there are plenty of bunkers and water hazards to contend with on the course, in general the playing surfaces are generous. We have big fairways and big greens. It’s not like you need to have pinpoint accuracy. On the greens there will be plenty of different pin positions to choose from. In this part of the world, where there are a lot of beginner golfers, or players that just want to relax and have fun, we don’t want a golf course that is going to be too difficult. At the same time, we have the room here to bring a championship, by letting the rough grow in and making it much more demanding off the tee.

What features stand out for you?
The wadi area of the course is going to be the highlight. It runs through the fourth, fifth and sixth holes and used to be a palm garden in the old days. We are trying to keep it as close as possible to its original form. That will be the only area of the course that will have palm trees, to maintain that heritage. The 13th on the back nine will also stand out, as a par 5 with two distinct fairway options from the tee. Everything we’ve done is in line with Education City’s focus on sustainability. The grass we have used is not only the best strain of paspallum, but it copes well with poor quality water.