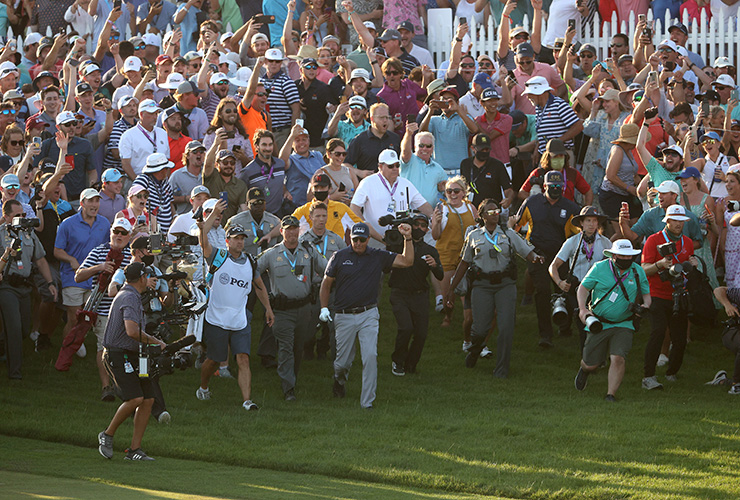 By Christopher Powers
After the events of the last year, it didn’t seem possible that we’d ever see a scene like the one Tiger Woods produced at East Lake in 2018, or the one Shane Lowry produced at Royal Portrush in 2019. Those days were long gone. A distant memory of a much different time in sports history.

Fortunately, our country is slowly returning to normal, normal enough for another one of those wild scenes to crop up on Sunday at the 2021 PGA Championship at Kiawah Island. Here’s the thing, though, only one man in the field could have made such a scene possible – Phil Mickelson, who became the oldest major winner in golf history with his final-round 73.

The people were, understandably, excited. After Mickelson all but secured victory with a well-struck 9 iron into the 72nd green, it was utter chaos:

Was there for Tiger in 2018 and 2019. This is right there with it. History. Goosebumps. Phil thrills again. pic.twitter.com/Jye2dTfxaa

One of those sportswriter moments where you feel legitimately high. Like, probably won’t remember tweeting this tomorrow. I am sober, for the record, Mother. #Sports hit sooooo different. pic.twitter.com/wk84HzzQy9

Among the hooligans on 18… pic.twitter.com/CnmHrxtKmt

All eyes on Phil. pic.twitter.com/7pspQIFpni

Straight out of a movie, and something only Phil or Tiger could produce, or Shane Lowry in Ireland, which is understandable. That said, would anybody be upset if fans running up the fairway like they did back in the day become the new normal?

Mickelson, to the surprise of no one, perfectly summed up the scene. “It was slightly unnerving but exceptionally awesome.”

Spot on, as always, Lefty.