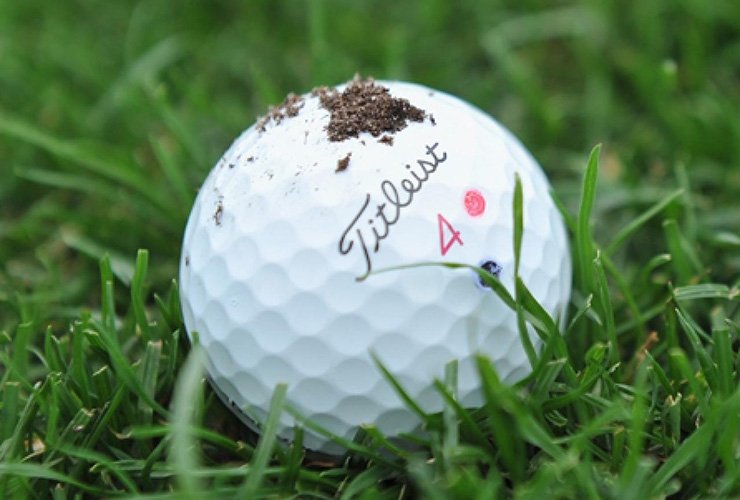 By Mike Stachura
Often times on the PGA Tour, we see players allowed to lift, clean and place the ball on the fairway when a local rule is employed during wet conditions on the PGA Tour, which means conditions are ripe for tee shots that find the fairway to leave the ball with an extra passenger of dirt, mud or debris. We haven’t seen that condition at Augusta National this week, though there’ve been a couple instances of players commenting about mud balls in the fairways. Mud on a ball can have a significant effect on trajectory, distance and in-flight curvature—as we’ve seen with a couple of players hitting errant shots and immediately blaming the mud on their balls.

The trouble is no one can really predict what that effect just might be. We even asked bright minds in the golf ball technology business, and our own Hot List team of Ph.D.’s. Nobody’s quite sure.

Rock Ishii, formerly the director of golf ball research and development at Nike and on the R&D team at Callaway, has studied the mud ball conundrum for years. He has some specific answers, but concedes, “It all depends on how much mud is on the ball,” he says, indicating the distance loss on a 200-yard shot might be as much as eight yards and that if there’s mud on top of the ball a shot will tend to spin too much and balloon up in the air. He also believes the ball will curve in the opposite direction of the side of the ball the mud is on. “That’s the basic tendency, but if there is too much mud, the ball starts going the same direction as the side the mud gets on. We don’t have enough knowledge what amount of mud turns it to the opposite.”

The main problem with the physics of a mud ball is that there are so many variables, and several of these variables conflict with each other. As John Axe, a Ph.D., member of the Golf Digest Hot List Technical Panel, former associate director of the Brookhaven National Laboratory and a former golf ball research scientist, explains, “I’m not surprised that people cannot agree upon a single answer.”

Here are the issues:

First, if the mud gathers on only one side of the ball it will slightly change the ball’s centre of gravity toward that side (assuming the ball lies flat on the ground with the mud only on one side), making it off-centre compared to a clean ball or, more simply, lop-sided. That off-centre effect means the ball is going to rotate and curve in the direction of where the extra weight is, all things being equal.

However, all things are not equal. Because while the rotational effect is in the direction of the mud, the aerodynamic effect of having mud on one side is theoretically the opposite. It has to do with how the air flows around the ball as it flies through the air. In a perfectly struck shot the mud would stay on one side and the air would flow more unsteadily around the mud side and more cleanly around the non-mud side, causing to the ball’s flight to drift toward the non-mud side.

Says Martin Broulliette, a Ph.D. in aeronautics and professor of mechanical engineering at Canada’s Universite de Sherbrooke, “Conventional wisdom says that the ball would curve in a direction opposite the side where the mud is. This would be caused by early flow separation on the mud side which would cause an asymmetric flow pattern resulting in a higher average pressure on the backside of the ball on the mud side and thus a side force opposite the mud side.”

When Axe conducted experiments with a small amount of lead tape on one side of the ball, the results were inconclusive to the players in the test. “Everyone, including myself, agreed that the shots went less reliably straight than control balls with no tape. But there was not a consistent pattern that we all agreed upon.”

Axe raises a further variable: “The relative importance of these two opposite tendencies on a real mud-coated ball is hard for me to predict,” he says. “For example, how much of the mud is left behind immediately following impact?”

The argument can be made as well that a mud ball is slightly heavier, and a slightly heavier golf ball, all things being equal, would fly farther. But conversely a ball with a larger surface area, created by a lop-sided mud passenger, would likely fly shorter.

Confused yet? Try hitting your approach shot to these ultra-difficult Augusta National putting surfaces with a giblet of dirt-goo on the side of the ball.