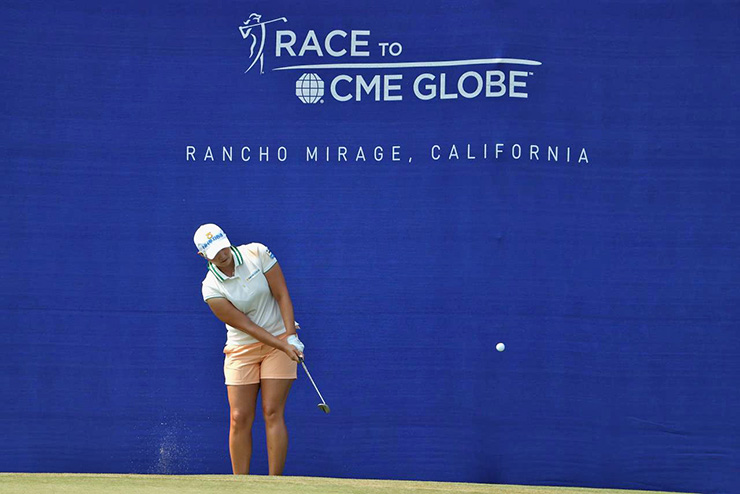 By John Strege
The 18th green on the Dinah Shore Tournament Course that unexpectedly took a starring turn in the 2020 ANA Inspiration will again garner attention this week, but this time for reasons that aren’t likely to invite controversy.

For the second straight year, the ANA Inspiration that begins on Thursday will be played without spectators and thus without the grandstand that, pre-pandemic, was always erected behind the 18th green. Last September, a structure, dubbed by Golfweek’s Beth Ann Nichols “the Great Wall of Dinah,” was put there to replicate the grandstand.

Several players, including the winner Mirim Lee, used the structure as a backstop for their second shots on the par 5 to prevent their golf balls from running through the green and into the water behind it.

The structure is not there this year, which will force longer hitters, at least, to decide between laying up short of the water or going for the green in two and running the risk of the ball reaching the penalty area.

MORE: How the ‘Great Wall of Dinah’ played a controversial role in the outcome of the ANA Inspiration

“When they have the tee back, I won’t be going for it, especially with this wind, with it being into,” Lexi Thompson, a past champion here, said on Tuesday. “But once they move the tee up, if I get a good number, I hit 4-iron in today and just placed the ball there and it stopped. It has to be a really good number for me to go for it.”

Sponsor signage that appears to be immovable has been erected behind the 485-yard tee box at 18, and word is that the hole will play at that length of shorter all four rounds. Wherever the LPGA decides to place the tees, they are likely to create even more interest on a hole that already historically proved interesting.

The greens here this time of year play firm and fast, adding to the challenge.

“It’s pretty firm,” Canada’s Brooke Henderson said of the 18th green, “so I think 3-wood is definitely out. If I can hit maybe a high 7-wood into the wind it will hold and a hybrid will hold for sure.”

Nelly Korda, who had a chance to win last September but fell to Lee in extra holes, summed up the dilemma based on her practise rounds this week.

Last September, Lee used the backboard to stop her second shot there on the 72nd hole of the tournament, then chipped in for eagle to erase a two-stroke deficit. In a playoff with Korda and Henderson, Lee again used the backboard, leading to a winning birdie.

A tradition unlike any other became a traditional line for CBS’ Jim Nantz before he even covered...