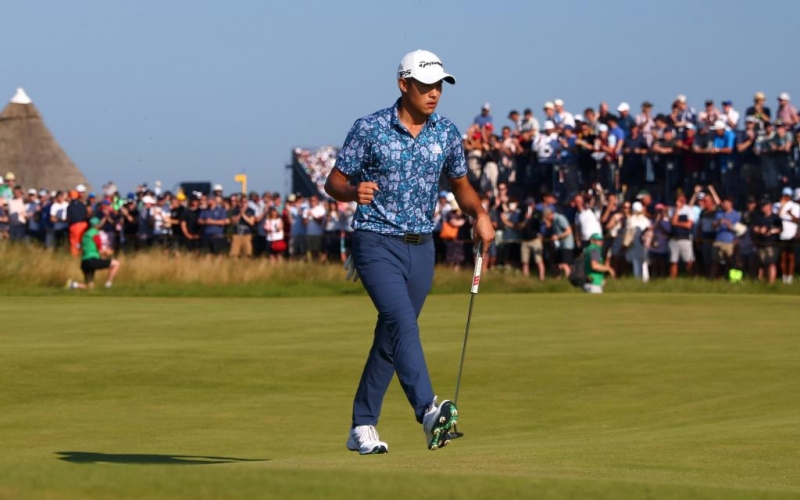 By E. Michael Johnson
Collin Morikawa won his second major championship on Sunday at Royal St. George’s, going bogey-free over his final 31 holes with some incredible scrambling and putting to edge Jordan Spieth by two shots with a final-round 66.

Morikawa thrust himself into the mix with a seven-birdie, one-bogey 64 in the second round and won the game’s oldest championship simply by playing a restrained game that belies his mere 24 years of age. While Oosthuizen made an early bogey at the fourth and then compounded matters with a skulled sand shot on the easy par-5 seventh that led to a damaging bogey 6 (only the fifth made on the hole all day), Morikawa stitched together a parade of pars early and then made Oosthuizen pay even more for his transgressions by nipping a nifty little pitch shot to within inches of the hole on the seventh for a tap-in birdie, turning a tie into a two-shot advantage. Another birdie on the eighth pushed the lead to three, and though Spieth cut the lead to one on the back nine, Morikawa made timely up and downs time and again, including a long birdie putt over the mound on the 14th green.

Morikawa made a number of key equipment changes before The Open. Chief among them was switching his TaylorMade P730 7-iron through 9-iron to the company’s P7MC model. The change was made specifically because the soles of the P7MC short irons produced better turf interaction on the firm links fairways. Sunday after playing in the Scottish Open Morikawa called Adrian Rietveld, senior manager, tour for TaylorMade, to try to figure out why his irons were behaving the way they were. “He felt he was not striking his short irons as flush as he usually does,” said Reitveld. For a superb ball-striker such as Morikawa, that’s an issue. After thinking about the issue, Reitveld came to the conclusion it might be the sole geometry on the P730 blades versus the P7MC.

“The P7MC has marginally less heel relief on the leading edge and a touch less bounce,” said Reitveld. “That should help deliver the club more flush.

“Collin got here Monday and we started testing. The MCs were launching higher but the sound was noticeably different on the strike. It is apparent with a ball-striker like Collin. He was able to shape his shots and get more control and consistency until the pitching wedge. That was working fine so he didn’t change that club. But on the 7-, 8-, 9-irons if you closed your eyes and just listened to the strike you could hear the difference.”

Morikawa’s TP Juno putter also received a tweak. Morikawa noticed how much slower the greens are versus a typical week on the PGA Tour and was struggling to get the ball to the hole last week in Scotland. As such, he tested different putter head weights and ended up removing the pair of 2.5-gram sole weights and replaced them with two 7.5-gram weights in his TP Juno blade, providing 10 grams more heft to help get the ball rolling more.

A lot of changes that added up to a winning combination.

The clubs Collin Morikawa used at the Open Championship: