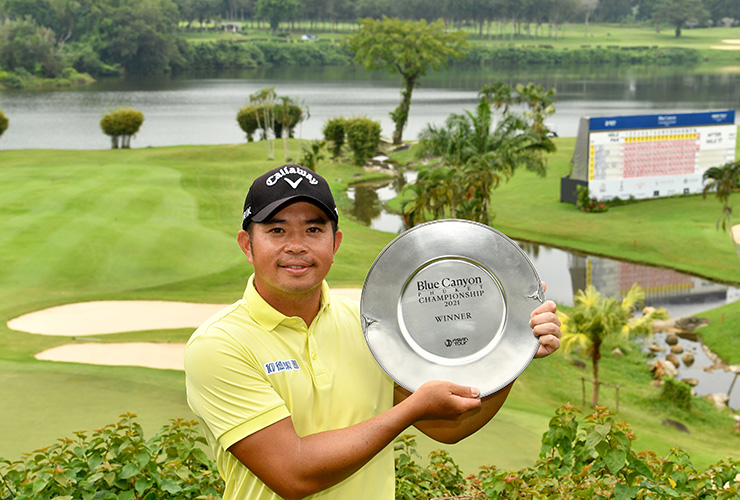 The victories at Thailand’s King’s Cup in June (then co-sanctioned by the European Tour) and two months later at the Asia-Pacific Diamond Cup (a tournament still co-sanctioned by the Japan Golf Tour) propelled the pint-sized Taiwanese player to a career-high 164th in the OWGR by years end. In between those two heady weeks, Chan made the trek to the OMEGA European Masters in Switzerland for another duel Asian-European Tour stop at famed Crans Sur Sierre, the useful T-49 finish contributing to an eventual fourth-place finish on the 2016 Asian Tour Order of Merit with $542,820 in earnings.

Golf was easy and life was good. With five (of now six) Asian Development Tour wins, Chan had served his apprenticeship and was on his way at the elite level, the world his oyster. Until golf happened that was. You know, that sport where the only guarantee is absolutely no guarantees whatsoever.

Fast-forward 1890 days bouncing between various circuits with varying success and Chan became an Asian Tour winner once again on Sunday. A fittingly topsy-turvy closing 68 got the job done at the $1 million Blue Canyon Phuket Championship, securing victory by a stroke from exciting Korean 19-year-old Joohyung Kim and Thailand’s Sadom Kaewkanjana who might just be the fastest player in professional golf, a trait that should be celebrated nearly as much as Chan’s brilliant Sunday display.

The Asian Tour was paused the best part of 20 months by the pandemic and this absorbing Phuket comeback  – including a noteworthy T-15 finish for 14-year-old Thai amateur Ratchanon Chantananuwat – almost made the enforced wait worth it. For Chan, who recovered from two bogeys in his opening seven holes on the Canyon course Sunday to eventually post a winning score of 270 (-18), there was no almost about it. What’s an extra 20 months when you’ve been waiting, grinding and hoping for five years?

“I am so happy to be back after the problems everyone has had with COVID. My front nine was not very good but an eagle on nine turned things around.”

That deftly drained eagle putt on the reachable par-5 saw Chan turn in 36 strokes – even par for Canyon’s outward nine – but still three shots adrift of playing partner Sihwan Kim, the lanky American who played a pivotal role in Sunday’s narrative before slipping to a share of fourth. 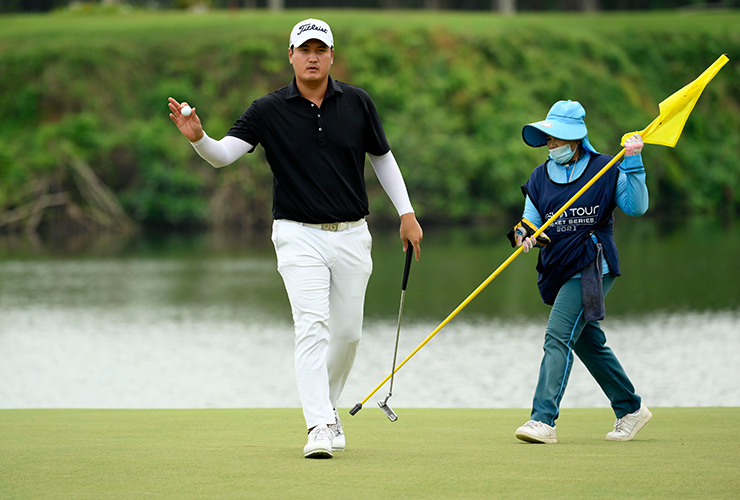 At least Chan’s backwards momentum had been reversed though, the eagle triggering a run of four successive birdies from the 13th. There was shot after impressive shot down the cliched stretch, the most impressive of them a laser beam to five-feet on the nerve-jangling 14th where water overpowers grass on the island green par-3, at least to the naked eye from an elevated tee pushed back to an extra intimidating 197 yards on Sunday. 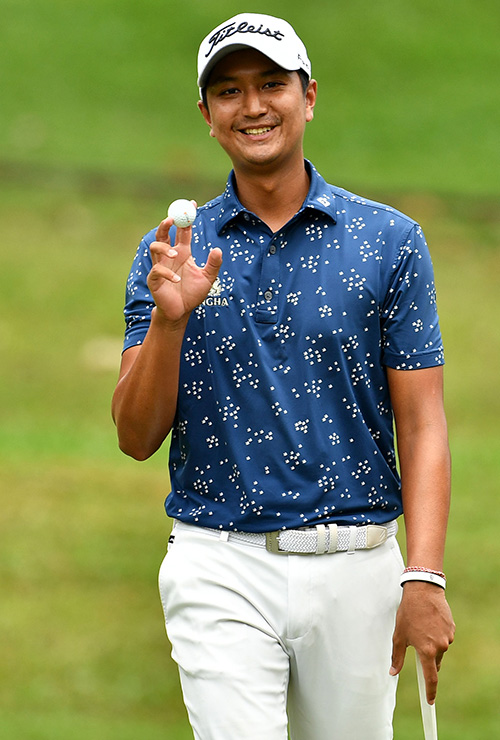 Chan had a decent look for a fifth straight birdie on 17 as Sihwan Kim’s challenge ended with a bogey and Kaewkanjana, who contributed so much so quickly to the final threesome, hung tough with a gritty par save. It sent the final round drama to the 72nd hole where a pulled drive and resulting tree trouble saw Kaewkanjana send his approach long and left of the green. Chan, meanwhile, also tugged his tee shot left to avoid the water right, and was only able to advance his second shot to just shy of the green from a gnarly, ball-swallowing lie. From there (after Kim missed a decent birdie attempt that might have forced a playoff had Chan and Kim both bogeyed) Kaewkanjana slightly undercooked another knee-knocking par save following a delicate chip across and down the final green. The stage was set for Chan who had pitched to three feet and he didn’t disappoint, calmly nailing the putt to avoid any chance of overtime. The lottery of extra holes is not something you spend five years grinding for. The door was opened and Chan quickly slammed it shut, leaving all challengers behind him.

“I always enjoy coming to Thailand. I feel very relaxed playing here. Actually, I feel less pressure playing here than playing back home,” said Chan who warmed up for the season resumption by finishing second at the Yeangder TPC on home soil last week, an event normally part of the Asian Tour schedule but this year scuppered by COVID-19 restrictions.

“It’s my second win since my baby boy arrived eight months ago. I guess its baby luck!”

Fatherhood has indeed been kind to Chan who has risen from 1366th to 428th in the latest world rankings and has taken his season earnings to $211, 775. That’s just a whisker more than $25,000 behind Ormsby (T-23 at Blue Canyon) as the field contemplate the 19km journey sou-west to this week’s $1 million Laguna Phuket Championship. It’s the second of four events the Asian Tour has been able to tack onto its 2020-21 schedule to deliver a meaningful season that, ironically, won’t climax until early January 2022 after the just confirmed $1 million Singapore International (Jan. 14-17 at Tanah Merah Country Club) and the $1.25 million SMBC Singapore Open (Jan. 20-23, Sentosa Golf Club).

The great news for Chan? A top-30 finish in the OOM is now guaranteed, meaning a start in February’s Saudi International, the Asian Tour’s new $5 million “flagship” and 2022 season opener, is assured. The world, though vastly different from five years ago, is at Chan’s feet once more.