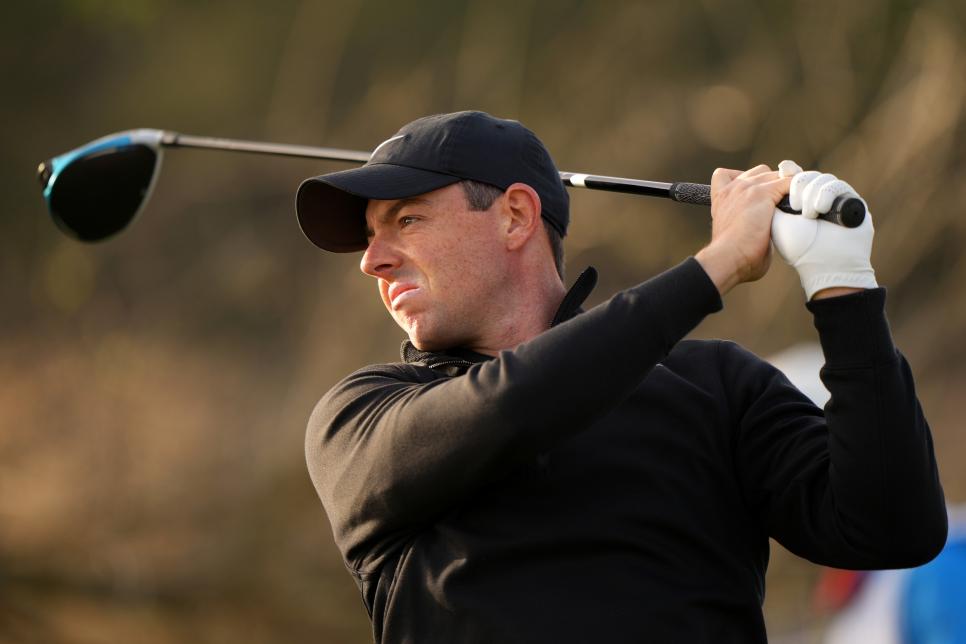 By Joel Beall
It wasn’t so much that it happened. The man himself telegraphed as much two weeks ago when reflecting on his ill-fated pursuit of chasing distance that had wrecked his swing, saying “It’ll take a bit of time” to get right. That his opponent is a player whose reputation is almost singularly shaped by match-play success didn’t help, and as the broadcast likes to remind the audience every four minutes, “anything can happen” in this event.

Still, it was how it happened that made Rory McIlroy’s 6-and-5 beatdown at the hands of Ian Poulter a head-scratcher. Because, in all due respect to Poulter—a living legend who lives up to the legend when it comes to match play—it sure seemed like this was a match Rory lost rather than Poulter won. Here were the five decisive mistakes from McIlroy on Wednesday at the WGC-Dell Match Play.

Putting woes at the 4th
A three-putt is like Robitussin; no matter how you take it, it ain’t going down smooth. But some three-jacks are harder to swallow than others.

Both Poulter and McIlroy hit marvellous tee shots to 15 feet at the 185-yard par 3, with Poulter just outside McIlroy. Poulter’s putt ran out of gas, giving McIlroy a chance to even the match (Poulter won the first with a birdie). However, despite getting a read off Poutler’s line, McIlroy saw his birdie attempt dive hard, leaving four feet and change. Exactly the type of length you don’t want to leave yourself in match play, especially if you’re McIlroy, who has been one of the worst putters from such distance this season (190th in 4′ putting). It showed on his next stroke, the putt ricocheting off the lip.

It was the type of putt that can have a residual effect, as evidenced on the next tee box.

Drive at the fifth
For those who missed his Friday comments at the Players Championship, McIlroy admitted that toying with more distance had a detrimental upshot to his game. “Obviously I added some speed and am hitting the ball longer, but what that did to my swing as a whole probably wasn’t a good thing, so I’m sort of fighting to get back out of that,” McIlroy said after missing the cut at TPC Sawgrass. “That’s what I’m frustrated with.” The effort hasn’t been for naught, McIlroy entering the week third in distance and strokes gained/off-the-tee, but those faster swings have produced some mighty foul balls.

That’s what happened at the fifth, as McIlroy’s drive found a backyard pool to launch dozens of “How’s McIlroy’s matchplay pool looking?” jokes on Twitter.

With Poulter in play, the Englishman put his approach just off the green, with a nifty chip earning a concession. Down three thru five, it was getting late early for McIlroy. To the Ulsterman’s credit, he answered by winning the sixth and eighth holes, and though Poulter responded with a birdie at the ninth, this was shaping up to be an exchange of haymakers over the back nine. Alas, not quite.

Short game woes at the 10th
The wedge game has never been McIlroy’s forte. This season the output has been particularly brutal, ranking 198th in approaches from 75-100 yards. From 94 yards out, McIlroy’s second did not find the green. It wasn’t a dreadful miss, some 36 feet to the hole, and it should have been an easy up-and-down, but with Poulter inside 20 feet, McIlroy needed a dart.

Rory compounded the issue with his third scooting 10 feet by. Poulter gave him an opening by missing his birdie attempt, but McIlroy could not clean up his mess. Poulter, now 3 up, then went 4 up after rolling in a 15-foot birdie at the par-3 11th (McIlroy had missed the green). Big of a hole as this seemed, McIlroy at least had a par 5 on the next to try and begin a comeback …

A wasted bomb at the 12th
The 12th doesn’t so much go downhill as it falls off a mountain, which is why it annually produces some of the longest drives on tour. So McIlroy’s 404-yard effort, while impressive, needs to be slightly tempered. But it was still 80-something yards ahead of Poulter, leaving the Poulter with a 3-wood in a green surrounded by water.

Now, above we mentioned this was a match Rory lost, and while that sentiment is true, you have to give it up to Poulter here. From 264 yards, Poulter went full send with a long iron and did so with vigor, his approach finishing seven feet from the hole. That is getting it done.

Desperately needing a rebuttal, McIlroy instead pushed his approach from 176 yards well right of the green. McIlroy at least gave himself a chance at birdie, but the birdie didn’t drop. Poulter had the hammer, 5 up with six to go. But it was Rory who nailed himself in the coffin.

Watery End
The par-4 13th played less than 300 yards Wednesday, and though there’s a lake on the left, grandstands behind and to the right of the green give the green-light to most players. While Poulter took the (understandably) conservative route, McIlroy fired his drive over the green. An iffy approach from Poulter opened the door, but the door soon closed as McIlroy’s chip never stopped, crashing into the water to end the match.

The round-robin format lets McIlroy see tomorrow, and as much as Poulter excels in this environment, he’s also struggled this year (139th in sg/tee-to-green), making him more vulnerable than his stature conveys. Again, “anything can happen” in match play. Unfortunately for McIlroy, that phrase left him on the business end of Day 1.