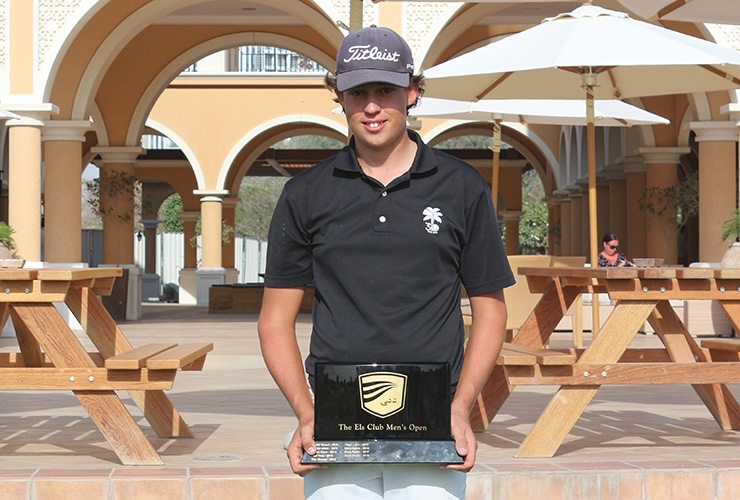 By Kent Gray
Josh Hill won’t repeat as Emirates Golf Federation Order of Merit (OOM) champion later this month – he’s been far too busy making waves in his rookie MENA Tour campaign for that – but has made a late-season statement anyway.

The 15-year-old made it back-to-back wins on the EGF circuit at the weekend when he waltzed to a five-stroke victory over Ziang Xu (SGSC) in the Els Club Men’s Open. Hill carded rounds of 68-69 for a seven-under total of 137 to avenge his runner-up finish 12 months ago and back up his victory in the Al Ain Equestrian, Shooting and Golf Club Open in late March.

The England age-group international is now headed to his homeland for the start of another European summer season and goes in fine fettle. The win at The Els, where he trains under Senior Instruction Joe Marshall at the new Claude Harmon 3 Performance Golf Academy, was his 10th EGF title in just 17 starts. And no, that’s not a misprint.

Hill has spent the opening months of 2019 working his way into second place behind countryman Curtis Knipes on the MENA Tour amateur order of merit. He’s placed no worse than T-39 in the five events on the regional Pro-Am circuit so far and will be most buoyed by his T-9 at the Ghala Golf Club Open as he eyes the resumption of the season in September.

For further evidence of the gains Hill has made this winter, check out this post from his father Russell (and some sage advice from Dad too!):

To finish off the pre-summer vids, I love this one, Josh has put in so much work this winter and it shows in the swing speeds! 112mph in September and 128 mph now (fairway finder is 120mph) Good luck to @j.hill_golf over the summer but just remember to enjoy, you are going in the right direction and one summer at 15 years old does not change a golf career! Thanks to @alipargolffitness @jmarshallgolf @superspeedgolf

For the record, Hill’s Trump International Golf Club Dubai club-mate Steven Kelbrick leads the OOM race with 205 points heading into the 54-hole EGF OOM Championship at AESGC from April 18-20. With his runner-up finish at The Els, Xu closed the gap on Kelbrick – he has 144 points provisionally to be third behind UAE rep Ahmad Skaik (148 pts) – heading into the decider where World Amateur Golf Ranking points will be available for the first time.

Kelbrick, still chasing his first title of the EFG season, bypassed the penultimate event at The Els after earning an invite to the new Jordan Mixed Open where players from the Ladies European Tour, Challenge Tour and Staysure (Senior) Tours played on the same course for the same prize money.

Kelbrick missed the cut at Ayla Golf Club after scores of 73-75. Dutchman Daan Huizing won the title by two shots from Meghan MacLaren, the daughter of LET chief David MacLaren.