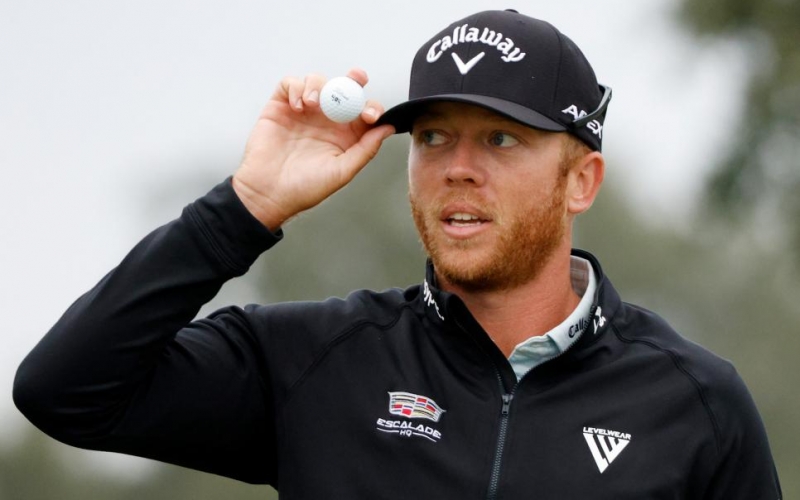 Cliff Hawkins
Talor Gooch reacts on the 18th green during the third round of the RSM Classic.

By Shane Ryan
ST. SIMONS ISLAND, Ga.—The moment Talor Gooch can’t forget came at TPC Craig Ranch in 2016, at the second stage of the Web.com Tour’s Q-School. He entered the third round on the qualifying number and proceeded to bogey three of his first four holes. The negative thoughts poured in, and the most alarming for Gooch, who had never held a job beyond golf, was that he might have to join the working world. For reasons he can’t explain, Best Buy came into his head—he was flat broke, and in order to finance his golf career, he started thinking that he’d have to join the Geek Squad.

When he finds himself in pressure-packed moments now, he always thinks back to that day, when he was fighting for more than just money and status. That day, he was fighting for his career, and the memory is already making the pressure this weekend easier as Gooch sits on a three-shot lead heading into the final round of the RSM Classic.

Gooch turned things around at Q-School, earned his status on the Korn Ferry Tour, and was playing with the big boys of the PGA Tour just a year later. He survived inside the top 150 his first two years, improved in 2020 and 2021, and now he’s playing the best golf of his career.

First birdie on the back nine. 🐦@TalorGooch leads by 2. pic.twitter.com/oQEcb67LDB

Last week, we called Gooch one of the unsung heroes of the fall for his unerring consistency. He’s notched two top-fives and two T-11 finishes in five starts, and now has the chance to finish the calendar year with an exclamation point. With a third-round 67 on Saturday in overcast, cold, windy conditions reminiscent of his Oklahoma childhood, Gooch kept ahead of Seamus Power (67) and Sebastian Munoz (69) at the tournament where five of the last six winners have been outright 54-hole leaders.

The conditions required Gooch to hit a low, Tiger Woods-style stinger on several tee shots, and his drive on 18 stayed so low that another caddie in his group felt compelled to ask where he grew up.

“Oklahoma,” Gooch said. “We’ve got to learn how to hit that one like that.”

Seamus with the sand wedge. 👀@Power4Seamus ties the lead with an eagle. pic.twitter.com/XbR4r0tAzG

“It’s one part of the game I’ve always really enjoyed practicing,” Power said of his eagle. “I love chipping. I could spend hours chipping all different shots.”

Power’s game, and his career, began to turn around in March, after a heartbreaking 151st place finish in the 2019 FedExCup standings. Despite not securing full status, he managed to overcome a COVID-19 diagnosis and play his way into enough tournaments to take advantage of his improving form. And starting at the Byron Nelson in May, Power strung together five straight top-20s before winning at the Barracuda. He hopes this is not his true peak as a player but knows he’s on an upward trajectory and playing the best golf of his life.

“Everyone wants to be the guy right out of college winning right away,” he said, “but that wasn’t meant to be for me. I wasn’t at the level I needed to be. So for me the journey was a little different. I didn’t lose hope or anything like that. I always said if I didn’t think I could win, I wouldn’t have continued to play. I love playing golf, but the best part of golf is being up in contention, making putts that matter, hitting shots that matter.”

The star of the early afternoon was Denny McCarthy, arguably the best putter on tour for the last five years, having finished No. 1 in strokes gained/putting in both 2019 and 2020, and top 20 in 2018 and 2021. His best club had gone cold thus far in the fall, and he was waiting for a day like Saturday, when on his front nine—the Seaside Course’s back nine—he made putts of 28 feet, 23 feet, 31 feet, and 23 feet again to post only the seventh 29 on the back in the tournament’s competitive history. In all, McCarthy gained 4.83 strokes on the field putting just in those nine holes, and finished with his highest total ever in that category—5.761. For a player with his skill on the greens, that’s a remarkable achievement.

“I have my own kind of art form, if you will,” the Virginia alum said. “I just work on trying to perfect my own little system, and I don’t try and let too many people tell me what to do because I know what I do really works. … I’m not looking at the hole, I’m seeing something tracking along that line whether it be ball marks or poa annua spots or something that sticks out in my way and kind of visualizing something along those spots.”

When asked if he sees a line representing the path of his putt, McCarthy laughed.

“I don’t like to think about it that much,” he said. “You’re making me think.”

McCarthy made a late double bogey to drop him to nine under and off the first page of the leader board, likely too far from Gooch to make a serious run.

In fact, the task of catching the leader will be tough even for the men in his group. As the sun went down Saturday night, Gooch fielded the media’s questions—serious and shallow alike—with total equanimity. His first name doesn’t contain the letter “y,” he said, because his mom’s side of the family had a penchant for creative name spelling, like Ambre, his mom, and Cassidi, his sister. (For the record, Gooch said he wouldn’t subject his own children to this quirk.)

He spoke about a golf trip he takes every year with his buddies in early January, and how he hopes he’ll have to reschedule if he wins on Sunday and earns a berth in the Tournament of Champions in Kapalua. And he spoke about the chip on his shoulder that has driven him from his early days, and through Oklahoma State and into the tough days of his early pro career. Even now, he wants to be thought of as the best Cowboys player on tour, a tough task when that group includes players like Viktor Hovland.

He’ll need that chip Sunday when nature lets its guard down and his competitors inevitably go low. But while he knows closing out his first PGA Tour win will be a great challenge, Gooch also knows he’s faced worse. Whatever else happens, he won’t lack perspective.