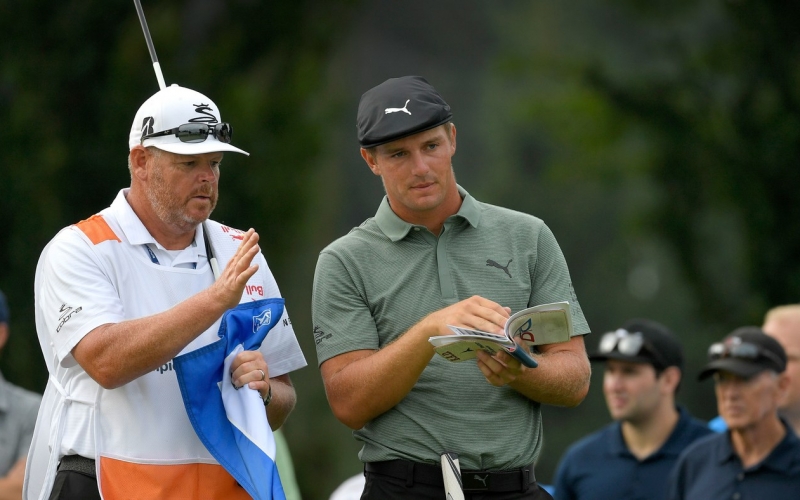 By John Feinstein
In 1994, playing his final U.S. Open, Arnold Palmer had a late tee time for the first round at Oakmont. More than five hours later, with the sun fading fast, Palmer and fellow competitors John Mahaffey and Rocco Mediate finally walked off the 18th green.

Jack Nicklaus was maddeningly slow, especially early in his career. Ben Hogan was probably just as bad. Slow play is anything but a new issue in golf.

The ongoing debate might have been best summed up years ago by Mark Russell, who has been a PGA Tour rules official for more than 30 years. “The problem’s simple,” he said. “We got some guys out here who want to play at 70 miles an hour, and we got other guys who want to play at 40. If we could get everybody to play at 55, we’d be fine.”

But they can’t. For every Rory McIlroy, Rickie Fowler and Rory Sabbatini—who are quite comfortable at 70—we have Bryson DeChambeau, J.B. Holmes and Jason Day, who have to hit the gas to get to 40.

The problem’s not new, but it has worsened in recent years. Though DeChambeau has become the poster boy for the slow-play issue—thanks to the viral videos of his meanderings at the Northern Trust—he’s far from alone. The rules officials know exactly who plays 70; who plays 55 and who plays 40. Their nickname back in the day for Bernhard Langer was Herr Sundial. Ben Crane went by The Anchor. Glen Day was labelled All—as in “All Day”—within weeks of making it to the tour in 1994. There are others.

RELATED: Top instructors on the root of golf’s slow-play problem and how to fix it

Fixing the issue might be impossible, but making the situation better shouldn’t be that difficult. As with any problem in life, the first step is admitting you have one. PGA Tour commissioner Jay Monahan and predecessor Tim Finchem always have been reluctant to publicly concede that slow play is an issue because as the leaders of an ultra-image-conscious sport, they know that most golfers view slow play as a pox.

Now, though, the tour has finally acknowledged that it needs to look at ways to speed up play, announcing eight days ago that it would explore changing its pace of play policy to consider penalizing golfers beyond those who are “out of position.” Technology makes monitoring individual players’ pace of play much easier than it once was. In fact, technology is a major reason the whole notion of “being out of position” is outdated and should be abandoned.

In the past, the only way to really tell if a group was slow was when they dropped behind the group in front of them. Because officials couldn’t be certain which player (or players) were responsible for the slow pace, the entire group would be put on the clock. That often infuriated faster players who didn’t like being labelled as slow when they knew one of their fellow competitors was the reason they were being timed.

Now, the tour can know precisely who is responsible for a group falling behind and can monitor that individual.

But the “out of position” argument doesn’t get to the heart of the problem. Rules officials will tell you that most players play better when they’re put on the clock. They’re almost forced to stop over-thinking the game. It’s worth noting that DeChambeau missed an eight-foot putt by a wide margin after his infamous two-minutes-plus walkabout in Jersey City.

Beyond that, it isn’t that hard for a group to fix itself once it has been warned. Once players pick up the pace for a hole or two, they easily get back into position because no one ahead of them is playing that quickly. That’s why the one-stroke penalty that’s supposed to be assessed for a second bad time almost never happens. Players know they’re on the clock so they play faster and—voila!—they’re back in position.

The European Tour is several months ahead of the PGA Tour on this issue. Sort of. On Monday, it issued a four-step plan to address slow play—pointing out that it began studying the issue in May and that this was not a response to the DeChambeau controversy.

Unfortunately, the new rules—which will go into effect for the 2020 season—while a step forward, lack teeth. The most important is to tighten the rule regarding a stroke penalty. Now, a player can be penalized after two bad times, rather than three. All that does is bring the Euro Tour into line with the PGA Tour’s current rule.

The European Tour also will increase fines for being put on the clock on a regular basis during the season, and players will have to go through an educational seminar on the rules of the game every three years. Finally, the tour says it will reduce field sizes from 156 to 144 as long as everyone ranked in their top 125 is guaranteed a spot in the smaller field.

The PGA Tour has been fining players for bad times for years. These days, 10 bad times in a year will get you fined $25,000, and any bad times after that will draw additional fines. For most successful players, this is pocket money, and because the tour doesn’t announce fines, there’s no public embarrassment attached to the fine. Ben Jared
Public comments from the likes of Koepka have helped bring the slow-play issue to prominence once more.

The best way to speed up play is to use modern technology to monitor every shot played. After one bad time, the next bad time costs you a stroke—regardless of whether your group is in position. If the first group walks onto the first tee knowing it’s on the clock at that moment, it will play faster from the start. That will allow everyone playing behind them also to play faster.

What’s more, unlike the fine system, stroke penalties will be in the public domain the minute they happen. The embarrassment of being called out publicly for slow play will do almost as much to force players to pick up the pace as being told to add one to your scorecard. If a player is consistently slow and consistently receiving stroke penalties, it will be difficult for him to compete.

This issue goes beyond fitting into a television window, or players and fans being frustrated seeing slow players on tour. Golfers at every level and of all ages watch the best players in the world. Younger golfers copy what they see when watching the best players. Slow play has become an issue not only on all tours but on the college and junior levels. If Jason Day isn’t moving toward his ball until he’s visualized his shot, that’s what 15-year-olds are going to do. If Bryson DeChambeau is going to analyse shots from 11 angles and then re-consult his yardage book, why shouldn’t they do the same thing?

It isn’t as if some in golf’s leadership haven’t tried to speed up play at all levels. Remember the USGA’s “While we’re young” campaign? It was a good idea, but, ultimately, amateur golfers are going to mimic today’s best players.

In the end, DeChambeau might go down as the man who finally forced the tour to admit it has a problem and do something about it. There’s no doubt that social media played a role in the most recent outcry. There was never a video that went viral of Nicklaus or Hogan or, for that matter, Nick Faldo when he was the world’s No. 1 player and was a lot closer to Russell’s 40 miles per hour than 70.

The fact that players can use social media to express discontent is also a factor. When Justin Thomas—who was paired with DeChambeau at Liberty National—and Brooks Koepka, both major champions, talk publicly about slow play being an issue, it’s difficult for PGA Tour officials not to react.

The tour has—at last—acknowledged it has a problem. The question now is whether it will come up with real solutions or artificial ones.