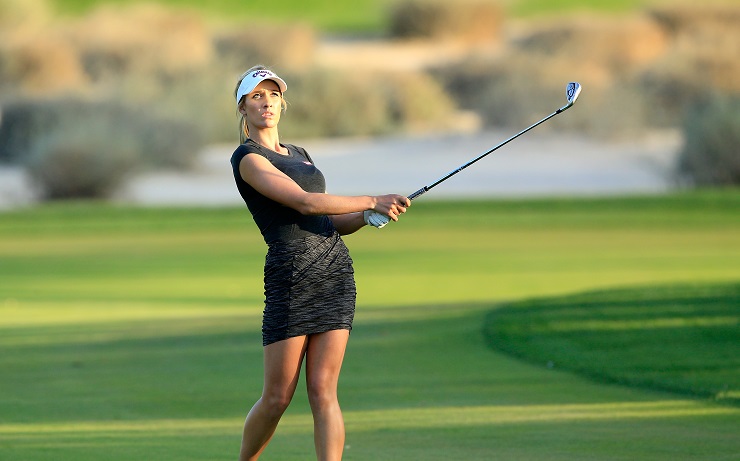 The “About” blurb on Paige Spiranac’s official website pronounces her as a “professional golfer, media personality and online influencer who’s on a mission to show the world how much fun golf can be”.

Spiranac will be hoping her golf game does more of the heavy lifting in that regard when she returns for a second tilt at the €500,000 Omega Dubai Ladies Masters at Emirates Golf Club (EGC) from December 7-10.

The Scottsdale, Arizona-based 23-year-old made her professional debut at the 10th anniversary edition of the season-ending European Ladies Tour (ELT) event last year and more than justified her sponsors’ invite by sharing the experience – the highs and lows – with her one million plus social media followers across Instagram, Facebook and Twitter.

But it is no secret Spiranac will want to up the fun factor inside the ropes next month after she missed the cut by eight strokes last December following rounds of 77-79 to finish +12 around EGC’s Majlis layout.

The American is making progress having captured her first professional victory on the Phoenix’s Cactus Tour earlier this year as well as making the cut in the Ladies Scottish Open at Dundonald Links.

“Playing Dubai last year was a great learning curve for me both inside and outside the ropes…I couldn’t have asked for a better place to come for my first tournament,” Spiranac said.

“Through it all, I had a great experience and I am looking forward to being a part of the event again.”

Mohamed Juma Buamaim, vice chairman and CEO of golf in DUBAi, which organises the tournament, knows how important Spiranac’s social media footprint is to grow the game beyond traditional audiences. A trick-shot video shot during her time at San Diego State University went viral to suddenly thrust Spiranac into the global spotlight.

“Paige belongs to a new breed of social media-savvy players who represent the best hope to elevate the profile of women’s golf,” he said.

“They are genuinely talented, they are charismatic and have the ability to reach so many fans, so crucial to the success of a tournament. It’s good to see women’s golf open up to these players who are taking a very different path to the top.

“We look forward to welcoming back Paige and hope her presence will inspire youngsters, especially from our region, to take up sports [which is] so important for a healthy lifestyle.”

Spiranac, who took to golf after a vaulting accident cut short her gymnastics career when she was just 12, will join a star-studded field headlined by three-time defending champion Shanshan Feng, Dame Laura Davies and rising LPGA Tour star Cheyenne Woods, the niece of Tiger Woods.